A significant breakthrough in the amount of pensions offered in the unorganized sector is overdue as it provides the basis of dignity for the elderly.

On December 12, the Supreme Court directed the Union Government to increase the pension given to elderly citizens. This increase is long overdue as the amount fixed at Rs. 200 in 2007 has not been revised since then.

A pension allocation of just Rs. 200 per month per person in these times of high costs of living! Anyone who hears this just cannot believe it, but this is the reality  of the most important pension scheme of the Union Government.

This is called the Indira Gandhi National Social Assistance Program ( old age pensions) which is the main pension scheme for the unorganized sector of the economy in which 90 per cent of elderly citizens are placed ( those who are outside regular pension linked jobs in the government, armed forces etc.).

Generally state governments add their own share to this. In the case of some relatively small states like Goa, Delhi and Kerala this raises the monthly pension to around Rs. 2000 or so but in the case of states with much larger population like Uttar Pradesh, Madhya Pradesh, Bihar and Gujarat the total pension amount after adding the state share remains at or below Rs. 500 which is very inadequate. This is for the age-group 60 to 80 years.

The Union government share  has remained unchanged at a very low level for almost a decade, in the course of which its real value has declined to Rs. 93. This is a real shame.

Now there is some glimpse of a reasonable chance that a breakthrough may finally be made due to three factors. Firstly the Pension Parishad, a people’s organization which  has members and supporters in a large part of the country organized a huge dharna cum public hearing in Delhi in which the demand for a universal pension of at least Rs. 3000 linked further to inflation related increases in future was highlighted in a very effective way. Representatives of many political parties extended support to this demand at this gathering of thousands of elderly citizens from many remote parts of the country.

Secondly the Supreme Court has specifically asked the Union Government to increase this pension. This is now the most important factor.

Thirdly with general elections due soon it is just possible that the government which has completely neglected this important issue earlier may take some favorable decision now.

Hence this appears to be an appropriate time to make the most efforts for securing a long overdue increase for old age pensions. Similarly justice should be done in the case of two other sections—pensions for widows and pensions for disabled people.

In its December 12 order the Supreme Court has also directed that at least one old age home should be set up in each district. 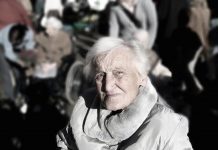 The Beauty Industry and Its Discomfort With the Idea of Ageism