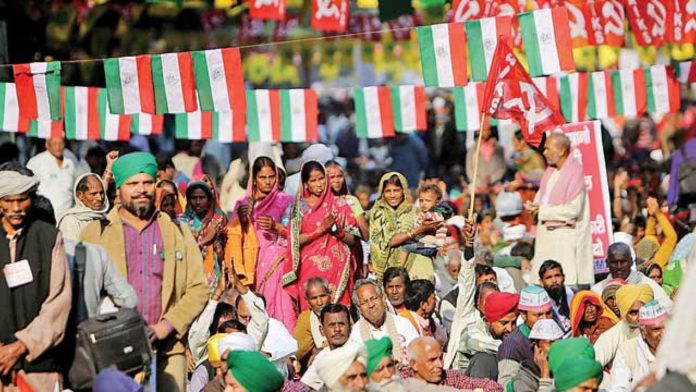 In recent times, we have seen innumerable protests by farmers in different corners of the country who have come up with a wide variety of demands ranging from a rise in the MSP, the enhancement of agricultural infrastructure to loan waivers and compensations. The farmers constitute an important vote bank, but should the nation-state’s bond with them limit itself to mere political rhetoric?

Farming is an activity which involves immense amount of labour and care throughout the year, it is a difficult task to rear and care a seed and help it grow into a plant, it takes patience, perseverance and immense amount of labour, to it all. If someone is a reader of Hindi literature and has read the writings of Munshi Premchand specially Poos ki Raat, one can get a glimpse of the life of a farmer and also understand the value of land and farming in a farmer’s life.

According to the report of National Crime Records Bureau titled “Accidental Deaths and Suicides in India” (ADSI) for the year 2015, the number of farmer suicide was 4,291

It isn’t that problems with the life and profession of farmers have not erupted earlier; rather it has been an ever persisting unsolved problem, which the farmers have faced year after year. In the Modi regime the the frustration and dissatisfaction of farmers have come to shore. The Modi regime has witnessed strong opposition from the farmers, farmers have protested in Tamil Nadu; farmers marched from Uttarakhand to Delhi and from Nashik to Mumbai, gathered from all parts of the world, protesting in large numbers. This does not means that the problems have suddenly erupted but there is something which has contributed to the angst of the farmers and resulted in large opposition.  In recent times the farmers have raised some key demands such as-

It is not a surprise that the farmers have been coming to the mega cities with their demands time and again and mobilising a large number of people from different parts of the city, little has been done to fulfill their needs.  The reduction of the community into a mere vote bank has rendered state led programs as political rhetoric.

Yogendra Yadav, the driver of All India Kisan Sangharsh Coordination Committee, which raises the key demands concerning the farmers of our country, said that the anti-farmer perception amongst the farmers has begun to strike under this regime and if one asks a farmer what the government has done for them, one can easily find a majority of farmers saying “the government has done nothing for us”. Yadav explains that the ruling government during the Lok Sabha Elections of 2014 promised that they would guarantee the farmers 50 per cent return over their production cost, which was major electoral bait.

This government tried to do away with the Land Acquisition Act, without obtaining the farmer’s consent and also forcing states such as Madhya Pradesh and Chattisgarh to stop giving bonuses over and above the Centre’s Minimum Support Price for Wheat and Paddy crops. Demonetisation was the last nail in the coffin and also the promise of loan waiver for farmers, which stands as an unfulfilled one till today, these pointer and the moral disappointment faced by the farmer’s has altogether added to their agony and brought them in the fore front.

Moreover the Minimum Support Price has also been significantly hiked, import duties on edible oils and pulses have been raised, and export restriction has been lifted. The plight of the farmer has deteriorated and the false promises of the government have brought in immense disillusionment.

Today what we see is a revivalism of farmer’s movements at large, with more and more farmers joining hands in large numbers to raise issues and ask their elected representatives about the promises they made and why they remain unfulfilled. This also speaks about the knowledge of farmers with respect to their rights and liabilities.

Farmer movement has been a part of our history but it did die down in between and now it has emerged again to assert their voices and get their grievances heard. It isn’t that the farmers are helpless today and that’s why they are protesting, no it is not rather the farmers are more aware now as they a have a sense of both rural and urban in these times and also what they owe and how important is it to raise their voice for genuine demands.

When the government can use the farmer’s issue for political campaigning during election, it is also their accountability to fulfil their promises made to the vulnerable farmers; this is what the farmers have come out for. They are protesting to make the government realise its responsibility. It is ironic that in a nation where more than half the population is involved in agriculture related occupations, governments only see farmers as potential vote banks.

It is indeed a pathetic story that year after year ruling regimes appeal to the farmer base to cast votes for them but continue to disappoint them time and again.

It is no surprise that this year itself we saw four mega protests organised by farmers. As the voices of the farmers unites and they mobilise in large numbers to ask for their demands whether it is loan waivers or minimum support prices, the government can no longer turn a deaf ear to them.  As we approach the 2019 Parliamentary Polls, the protests by the farmers will surely cast a new wave of political mobilisation and resistance in the nation.