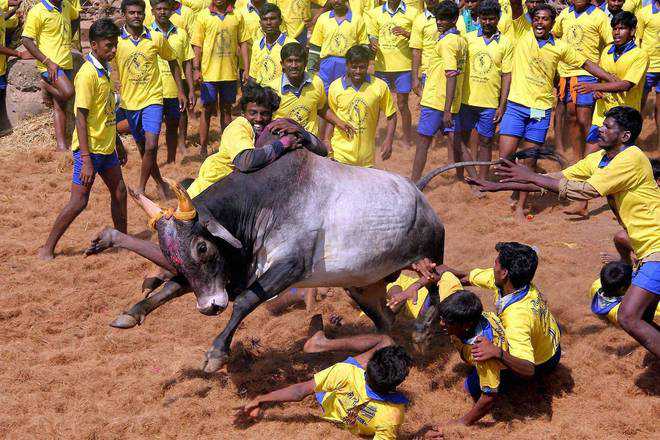 Jallikattu is a traditional customary practice of Tamil Nadu where participants compete to tame and calm down a fierce bull often injuring either the bull itself or many among the audience.  Should such a ritual continue to exist despite its inherent brutalities or can we rethink custom and tradition in more humanitarian terms?

Mayank Singh is a researcher working on Global Enviormental Movement based in Colombo.

Jallikattu is a traditional public spectacle in which a strong and mighty bull (of a specially trained and cultivated species) is released free among a large crowd of people. The audience then run in all directions behind the bull to catch hold of the bump on its back with both arms and then try to hang on it while the bull tries fiercely to escape from the hold.  The participants try to hold on to the bull for as long as possible and try their best to make the bull stop. In higher versions of the game participants can also be challenged to sit on the back of the bull and remove flags that are attached to the bull’s horns. The spectacle or Jallikattu is typical to the Pongal day celebrations in Tamil Nadu.

The practice has been going on traditionally for a long time in the state of Tamil Nadu and is a constant part of the customary traditions of this place. However, in recent times the ritual has come under severe criticism for being against the rights of animals and especially bulls who are central to the spectacle.  Many animal right actvists have raised concerns over the harm that the game can do to the animal and the amount of injury or pain that can be inflicted in the process upon it.

The customs have it that before the bull is released or set free into the open field it is heavily beaten with sharp objects and its tail is forcefully straightened which can cause vertebral damage. There have also been reports of cases where the bulls were either made to drink alcohol before the game or chilli peppers were rubbed on their eyelids to intensify their anger. Also, while the game is going on the contestants are free to stab and brutally hurt the animal in order to tame it. The bulls often have also lost their control and have run into open streets where they have been hit by cars or other vehicles and have suffered both injury and death.

Those concerned with animal rights have claimed that the brutality of the spectacle destroys the natural temperament and skills of the bull apart from inflicting pain and injury upon its body. The amount and extent of injury that these raging bulls can cause to humans is also a matter of great concern as in the past there have been many who have been terribly injured or have even succumb to death during the game.

The Animal Welfare Board of India declared Jallikattu  to be inherently  violent and cruel to animals. Organisations like the PETA have also protested against the custom of the Jallikattu. Whether Jallikattu will continue to take place in Tamil Nadu and Maharashtra will remain to be seen as now the question of whether it should be practiced as a cultural right despite its problems has gone to the special Constitutional Bench. The fate of the customary practice now depends on the judgement.

However what we must acknowledge is the fact that we cannot allow brutalities against animals to take place even if culture or religion has sanctioned it. Moreover with immense population density and a lack of security mechanism events such as Jallikattu can prove to be utterly dangerous and fatal. With passing time and awareness our sense of collective welfare, humanitarianism and Eco-sensitivity shall enable us to become free from oppressive traditional systems. If we are ready to amend and rethink our customs we can be more in tune with the greater good of the cosmos.