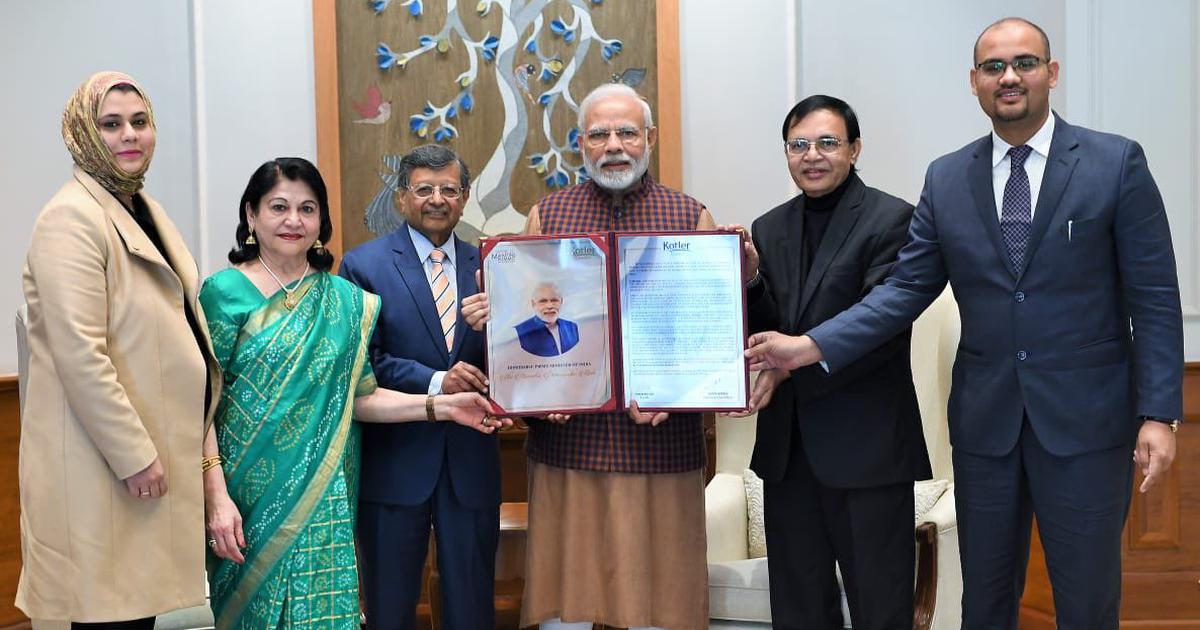 The Prime Minster of India Narendra Modi was recently awarded the Philip Kotller Presidential Award, bringing about Opposition condemnation about its authenticity and legitimacy.  But should it really be surprising given the propaganda of brand Modi?

The first ever Philip Kotler Presidential Award has been awarded to the Indian Prime Minister Narendra Modi. Narendra Modi was chosen for this award based on his remarkable leadership skills shown during his entire tenure as a Prime Minister. Other factors which helped him in fetching this award are his dedication and commitment for the welfare of the people in India.

Taking a Jibe over the Award

Most of the leaders holding key portfolios in the Modi cabinet, wasted no time in congratulating Mr. Modi for the award while the leader of the Opposition Rahul Gandhi made a jibe on Modi for this achievement.  Shashi Tharoor, Congress MP termed the award a national embarrassment and further requested him to return the award as the award was fake. The award had led to a controversy as its authenticity is being questioned. The founder of World Marketing Summit, amidst the chaos had tweeted a congratulatory note for Narendra Modi on Twitter and mentioned that the Indian Prime Minister has received the award for his leadership skills and selfless service towards India .Apart from the political controversy which surrounds the award, it is important to wonder how a Prime Minister could be chosen for an award meant for contributions in the marketing and advertising industry.  Amidst great business leaders and qualified contenders, how was Prime Minster Modi chosen to be the esteemed awardee?

Philip Kotler in his interaction with the media on online platforms defended his choice by saying that Modi stood highest on the criteria laid down to confer the maiden Philip Kotler Presidential Award, he further said that the concept behind the award was to honour a major public leader who has given new life to democracy and economic growth of a nation.  Philip Kotler appeared quite condiment in asserting that Prime Minister Modi was indeed suitable for it.

This is quite an ironical statement in times when the Indian economy has faced high jolts like that of rise in crude oil prices, hike in farm support prices which could lead to inflation once again. A survey conducted by Oxfam revealed that India is now among the countries with the highest level of inequality and unlike other countries inequality in India continues to rise.

Demonetisation despite its branding and promise was the biggest failure of the Modi regime. The Centre for Monitoring Indian Economy estimated that about 1.5 million jobs were lost during January through April 2017 following the implementation of demonetisation.  A report published by Azim Premji University stated that 16 per cent of youth and higher educated Indians have been designated unemployed after 2015.

From his iconic hugs extended to world leaders like Barack Obama, Donald Trump and Putin to his selfies with Bollywood stars- how many other Prime Ministers have worked so hard towards building their brands?

Prime Minister Modi has won the award and it has indeed generated a great degree of controversy from those who question the very nature of such an award and express disbelief that the jury for selecting an awardee could be confidential.  While the BJP leaders decided against wasting time in congratulating the Prime Minster, the allegations imposed by the Opposition surely make the award more of a controversy than a celebration.

The WMS Award Ceremony in which Prime Minister Modi was given the award was sponsored by GAIL and co-sponsored by Patanjali and Republic Tv and a number of other companies. It is known that the WMS has earlier only given awards in the advertising and marketing sector. Moreover the Press Release made by the government does not mention the organisation or the jury that conferred the award. The secrecy behind the jury at WMS that gave the award and the hitherto unknown Aligarh based firm, Suslence Research International Institute that franchised the Delhi event have created a havoc at the national level.

The whole controversy over the award has led to a large degree of conspiracy theories. While it cannot be denied that Modi became the choice for a marketing award not out of a vacuum but indeed his political career has been all about marketing and branding. From the marketization of the word ‘Mitron’ which he uses to address the audience at a rally or the portrayal of a chivalrous masculine frame that has a ’56 inch chest’ to a man whose heart bleeds for his mother to brand names ranging from Digital India, Swachh Bharat, Make in India- the Prime Minster has a hold over marketing and business strategy.  In fact the Prime Minister’s ability to use management jargon at speeches and endorsement of the self as the biggest brand in the nation cannot be neglected.  From his iconic hugs extended to world leaders like Barack Obama, Donald Trump and Putin to his selfies with Bollywood stars- how many other Prime Ministers have worked so hard towards building their brands? It shouldn’t be a surprise that the ‘First-ever’ Philip Kotler Presidential Award has gone to our prime minister.