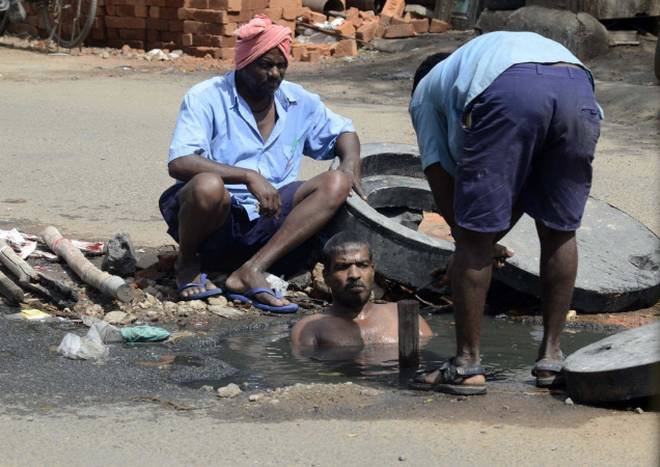 More than seventy years since independence have passed and yet we see that most of India’s manual scavengers and cesspit cleaners are invariably Dalits or poor Muslims.  Can Clean India become meaningful without cleaning the muck of caste discrimination?

Anita Das is a Dalit Rights Activist and Journalist – based in Bhopal.

India’s sewer pit cleaners come from the poorest of backgrounds and face a life of oppression and exploitation which ranges from low wages and poor work conditions to social stigma and degradation. The negligence of sewer pit cleaners and the failure of the state to ensure that their lives are not endangered have meant that in India, a person dies every five days cleaning a sewer pit.

These deaths are reported as negligibly as possible and seldom capture the attention of people.

When Prime Minister Narendra Modi promised that by October, 2019 he would create a ‘Swachh Bharat’ what he perhaps did not give adequate importance to was the fact that in order to create a clean India, its cleaners have to be empowered.

The deaths of five sewage workers in the heart of Delhi and that too within a gated community meant for the posh elite, has opened by the discussion of the significance of incorporating India’s sewage and sanitation workers in a programme meant to clean India. We all know that hundreds of million dollars have been invested to boost the Clean India brand including the campaign to build a vast toilet network to eliminate the possibility of open defecation related concerns.

Can India be clean without empowering its Sanitation Workers?

If you see the campaign’s own website you would find that 85 million rural toilets have already been constructed in India’s villages and the work on many more is going on.

In urban areas, the records tell that more than five million toilets have been built for households in urban areas and 4,00,00 community toilets have been constructed.  This may be the story of the campaign and it may slowly have benefited the lives of people in India’s remotest corners but we cannot afford to forget that the scenario in India is different at the grassroots.  India’s towns and cities have a darker sanitation story and thousands of households in India’s towns and cities are still cleaned by hand.

Their latrines are cleaned through hand, faeces get cleaned manually and then these are carried on the head in handmade baskets and dumped in drain or convenient water bodies.  Cities are largely cleaned by manual workers and the sewers, blockages are cleared by men who continue to be untrained and ill-equipped.

The way cesspits are cleaned in urban areas puts the lives of sewage workers at risk as they have to fully immerse themselves in the pits to unblock them. The act of manually removing faeces was made illegal in 1993 and further made illegal through the 2013 legislation. However the Karamchari Andolan that works for the welfare of these workers recorded that 170 such deaths have taken place since January 2017. What needs to be addressed is the fact that legislation alone cannot enable us to empower these manual scavengers and make sure that they are given a healthy environment to work in. What we have to address is the fact that it is the inherent caste hierarchy associated with manual scavenging and cleaning work that has barred India from truly overcoming this crisis. People in India still widely hold the belief that certain people are born to clean the dirt that society produces. These people who are termed as ‘untouchables’ are seen to be the receivers and transmitters of caste based pollution.

This ritual impurity of the untouchables has pushed them to the bottom of the society and left or them nothing but a life of pain and indignity. Today these people are called the Dalits and they constitute 200 million people. Irrespective of the language they speak and the region to which they belong, what has united the Dalits from all corners of India is the fact that they are deprived economically and socially.

Although untouchability was made an offence by the Indian Constitution and many alternative provisions were implemented to uplift Dalits, what is ironical is the fact that most waste management tasks continue to be performed by the Dalits. What is paradoxical is the fact that although the Constitution tries to undo the caste hierarchy and empower the traditionally oppressed Dalit people and give them support through protective discrimination and reservation in government jobs and institutions- the reality remains that even till date, they continue to be employed and exploited in large numbers in India’s manual cleaning employments.

Lack of Political Will: Are Dalits Destined to be Manual Cleaners?

The usage of sub contracts that diffuse responsibility, public-private partnerships in clean India programs and the lack of accountability in terms of using technology where the usage of human labour is against human rights- have collectively brought us to a situation where the resonance between the Dalits and the tasks of manual scavenging have become synonymous to each other.

The absence of quality employment and lack of financial help for self-employment collectively lead to a situation where the traditionally deprived Dalits are time and again seen as the best choice to perform the task of cleaning which is more often than not unsafe, unpaid and unsafe. The perpetuation of the traditional occupations by the Dalits in terms of finding employment in public and private sanitation domains and specially sewage has to be seen as critical to the perpetuation of the caste system in India. The absence and lack of political will to ensure the safety of these workers and to adopt adequate technology and safety gear as compulsory for such jobs has meant that the lives of thousands of Dalit men and women continue to be dark and helpless.

The removal of human faeces by hand has been considered ritually polluting and the solid overlap of occupation and caste in this regard is a manifestation of the fact that India has entrenched caste inequality even seventy years after independence. Several new technologies are being used across the world to ensure that only a minimum number of people have to go through health risks as grave as the ones faced by manual scavengers in India.

These include large trucks that suck out sewer and deposit them on farmland to be used as fertiliser, if such technologies could be implemented in India it would minimize the need for manually cleaning the cesspits. But this would mean that we would require better systems for sewage treatment and management of the waste so that they don’t end up in India’s rivers and seas.

What comes as a positive move in many of India’s states is the usage of new cleaning techniques such as Bandicoot and Sewer Croc, these are two promising technologies that use robotic appliances to clear blockages and detect poisonous gasses.

The Sewer of Caste Oppression

What is of prime concern today is the fact that municipalities will continue to rely on the unskilled and cash-stripped poor workers who would fall for these contracts in the absence of better opportunities.  These workers have no protective gear and lead a life amidst filth often with no water to clean the slime at the end of the day. Almost all these workers are Dalits. The hard smell and the inhuman work ambience lead many of these workers to resort to cheap alcohol that takes a toll of their lives at a young age.  While the Clean India Campaign was a powerful idea with immense potential and promised to open ways in which manual scavengers could lead a life of dignity, it fails to address as rigorously as needed the caste discrimination and prejudice that are explicitly embedded in India’s orientation to dirt. We need to work towards a societal awakening that those who have traditionally dealt with tainted things are not doing so because they had no other potential or because they had been born to do so but because of India’s failure to overcome the unjust and exploitative caste system despite legal intervention. The first step is to equip those engaged in the task with apparatus and safety gear, training and due wages. It is also important to allow their children to grow up in a milieu where they don’t grow up to believe that they are destined for the sewers- this means that they must be enabled to get quality education.

The society needs to work towards addressing why the caste system has not been removed from the nation even decades after independence and despite legal measures.  The synchrony between manual scavenging and being a Dalit are proof enough of the fact that traditional notions of purity and pollution form the premise of work distribution to a great degree.

Universal schooling, implementation of legal measures for abolition of caste, interaction and exchange between different castes and the strategic and sustained empowerment of the Dalits through education and employment opportunities along with the introduction of cheap and affordable technological options to deal with India’s waste problem will enable us to become free from caste prejudice. Until then we will be unable to positively transform the lives of India’s Dalits who dive down to the filthy bowels of the earth to find themselves drenched in human excreta.