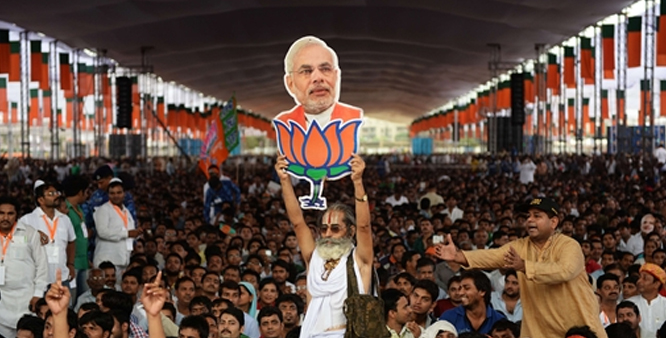 Here is a perceptive piece that speaks of a kind of politics – beyond a party or a fixed ideology – that seeks to recover the meaning of intense engagement in the micro reality of everyday world.

[dropcap]I[/dropcap]n this election year everyone is speaking of politics. The adherents of the ruling regime celebrate the assertion of Hindutva, the necessity of the might of majoritarianism, and the desirability of an ‘assertive’ Prime Minister like Mr. Narendra Modi as the best possible ‘brand’ we could imagine. India, they believe, is developing with a doctrine of hyper-masculine nationalism and neoliberal global capitalism with its narrative of ‘development for all’. As usual, they argue that ‘there is no alternative’. But then, the ‘opposition’ parties assert that they have the appropriate ‘alternative’ to this potentially ‘fascist’ rule. With strategic alliances and complex electoral mathematics, they think that they can marginalize the RSS -BJP brand of communal politics, and move towards ‘egalitarianism’ and ‘secularism’. While the ‘parliamentary’ left (somehow limited to Kerala) observes and identifies the ‘lesser evil’, the Maoists, as it is said, think of overthrowing this ‘oppressive’ system  altogether through the politics of counter-violence.

And the political drama is becoming toxic as well as spectacular. With Mr. Amit Shah’s aggression and Mr. Narendra Modi’s dramaturgical performance, the BJP seeks to demonstrate that there is no end to ‘success’, and it is destined to be immortal, Mr.Rahul Gandhi misses no opportunity to remind us of the mysterious Rafale deal, and the unholy alliance of Mr.Modi and Mr.Anil Ambani. Mayawati’s ‘masterstroke’ in Uttar Pradesh, Mamata’s assertive and anti-BJP street politics in Kolkata , Priyanka Gandhi adding yet another dimension to the image-centric/glamorous politics in the visual age, and the possibility of all sorts of alliances -pre-poll and post-poll: politics seems to be everywhere -in village tea shops, in local trains in Mumbai and Kolkata, in Bollywood, in newspapers and ‘prime time’ panel discussions, and even in our dinning tables. With humour, gossip, satire, excitement and cynicism we seem to be consuming politics with great indulgence.

At this juncture, I ask myself: What is my politics? And believe me, it is not very easy to provide an answer to this question.

The Meaning of Being ‘Ridiculously Idealistic’

To begin with, let me explain why for me things are really very difficult. First, I do not belong to any organized political party. I do not devalue the significance of a party or its organization as an instrument of collective mobilization. Bu then, possibly my philosophic anarchy or unique existential urge makes it difficult for me to be completely absorbed by a party.

In a way, I have not yet been able to transcend the tension between group loyalty and personal autonomy. Second, it is difficult for me to adhere to a well-defined and fixed ideology. I love to negotiate with a spectrum of ideas and worldviews. I have not forgotten my Gandhi even though Marx is equally fascinating. Despite my ‘forward caste’ background, I see the significance of the kind of critique the likes of Phule and Ambedkar evolved. But then, the ‘identity politics’, I have no hesitation in saying, constrains me; it is suffocating. Although I appreciate the modernist mind of Nehru in his celebration of secularism and scientific temper, the liberating potential implicit in the spiritual wisdom of Kabir, Nanak, Nizamuddin Auliya, Tagore and Ramakrishna has tremendous appeal to me. I loathe capitalism-its commodity fetishism, heartless competition and worship of money; but then, for me, if the state becomes overwhelmingly powerful in the name of socalism, it is dangerous and life-killing. Possibly, my fluid mind loves to entertain ambiguities. I know that it is difficult for me to allow myself to be typified as a Marxist or a Gandhian or a socialist. And third, I do not understand the game of ‘strategies’- a necessary tool to survive in the arena of politics. Frankly speaking, I do not feel unduly excited if today Chandrababu Naidu condemns the BJP, and pleads for an ‘alternative’; nor do I experience the thrill of revolution if the ‘secularists’ begin to overlook Laloo Prasad Yadav’s corruption simply because he is anti-BJP. It is no less difficult for me to digest the BJP’s ‘love’ for Muslim women, and its fight against the practice of Triple Talaq; nor do I understand the ‘secular’ silence over the tyranny of this practice. Possibly, I have not yet become sufficiently clever and Machiavellian to be political in this sense. In a way, I am ‘ridiculously idealistic’.

Beyond Big Politics: The Beauty of the Everdayness of Life

Yet, I have not given up. I continue to strive for my politics. At times, I feel tired of seeing myself as a mere consumer of politics. For me, politics is not about buying a ‘product’ from the available options–say, Modi’s rhetoric and Rahul’s ‘hug’; nor is it about carrying the election identity card to the polling booth, and opt for the ‘lesser evil’, and then wait for the next five years to repeat the same exercise. Instead, I try to find my politics in the apparently ‘non-political’ domain, in the micro reality of everyday life, in simple/ordinary human relationships.

Democracy as a spirit of dialogue, debate and art of listening emerges as my active choice.

Let me draw the outline of my politics through a set of living examples. As a teacher, my classroom becomes an experimental space. I try to be dialogic; I intend to break the wall we erect between the ‘knowledgeable teacher and the ‘passive’ learner. In other words, democracy as a spirit of dialogue, debate and art of listening emerges as my active choice. I do not undermine this democratic act in the micro reality of the classroom because there can not be any structural revolution without altering the practice of the everyday world. Likewise, I would love to reduce my dependence on all sorts of artificial needs–the needs manufactured by the market and its ‘greed industry’. This is not to idealize poverty; instead, this is to say  ‘no’ to ecologically unsustainable consumerism.

Furthermore, I do not want to see a human being through the lens of caste and religion. Even though I understand the  agony of a Dalit, and comprehend the specifity of the context, I see him as just humane. Because the only way to fight the violence of caste is not to fall into the trap of the rationale of caste and its hierarchical categories. A Dalit, a Muslim, a Christian, a Hindu: we all love children, flowers, mountains and oceans; we all would die; and we are on the same boat as we need the conditions for dignified living. The awakening of our shared humanity is the beginning of real fraternity. It can’t be achieved merely through quota politics or politically manipulated Iftar parties.  My politics is the art of relatedness and the spirit of communion. Well, as a vulnerable human being with all sorts of weakness, I often fail. Self-righteous orientation, I think, is dangerous. The only thing that matters is the willingness to move even if we fail time and again.

A Dalit, a Muslim, a Christian, a Hindu: we all love children, flowers, mountains and oceans; we all would die; and we are on the same boat as we need the conditions for dignified living. The awakening of our shared humanity is the beginning of real fraternity. It can’t be achieved merely through quota politics or politically manipulated Iftar parties.

My politics manifests itself in these simple/unknown acts. But then, the question remains: Will I exercise my voting power in this election? Possibly, I will. Yet, I am aware of the fact that my politics does not end in the polling booth. It is essentially the way I lead my life–beyond catchy slogans, lofty promises, loud manifestos, big banners and reckless Machiavellianism. This is not to suggest that I remain confined to my micro domain, and refuse to take any position in the larger issues relating to economy, governance and culture. Yes, when the leftists mobilize the farmers for their rights, I am with them. Or, when the Gandhians raise their voice against big dams and environmentally destructive development projects, I support them. Yet, I do not belong to any party. I have not yet arrived. Hence, my search continues….