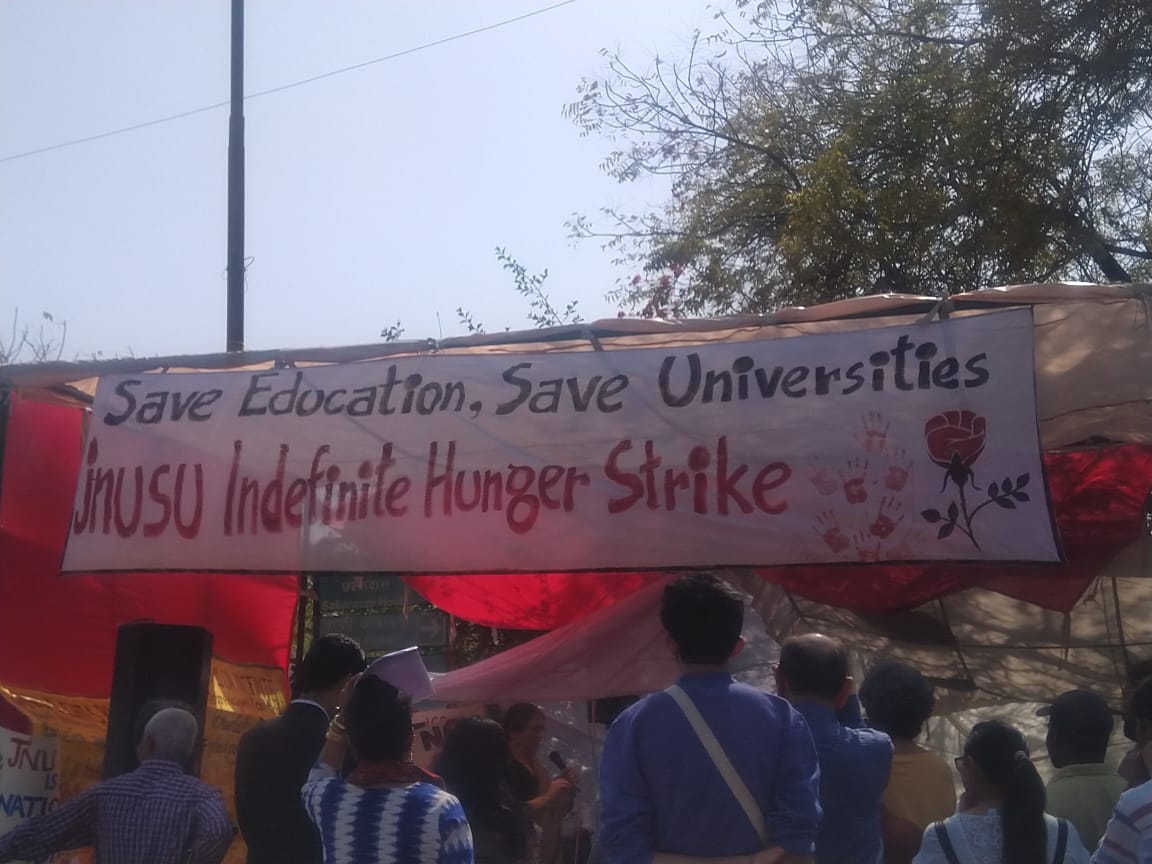 Many students joined the protest after the eleven people who started the protest have fallen ill. The administration has so far not responded to this strike.

The administration is also alleged to have called up parents of the students sitting on the strike in order to exert force for giving up. Students sitting on an indefinite hunger strike have entered the 8th day of their struggle.

As the strike went on further few students including Subhanshu Singh (ex JNUSU member) had to call off his hunger strike pertaining to ill health. Their physical condition must not have allowed them to fast further but in spirits and morals they are protesting.

On the 8th day today, almost 150 students gathered for a relay hunger strike, as these students took turns to sit for the strike. 9 students including the Ex-President Geeta Kumari, Vatya Raina, Surya, Sarika Chaudhary, Shashi , Karim and three others are sitting for the indefinite strike permanently. On the agenda for today, the students’ community has decided to march towards the Vice Chancellor’s house with their demands and if their demand is not taken into consideration by the administration their struggle will continue.

The protesting students have come forward in solidarity with the declining state of education in our country today. Under the broad propaganda of ‘Save Education’ there are certain keys demands which the students wants to get fulfilled.

The students have asked to bring back the system of allocation of Deprivation points in the entrance exam of JNU, the system of BA-MA lateral entry needs to come back as the students opine, last year the university introduced two professional courses- Engineering and MBA but without adequate technical or manual infrastructure.

As informed by Karabee Kakati, Councillor SIS/JNU “the annual fees of both the respective courses has been abysmally high which is not justified especially in a public university where the university does not even has the basic minimum infrastructure to support that education, this has do go”. She further stated “the entire idea of social justice has been evading, once for which JNU was known today we are fighting to get it back, this unfair and unjust” JNUTA, the teachers association of JNU have shown full support to the protest.

Centres and schools in JNU have shown full support to the movement by participating in March taken out in solidarity with the protesting students. As of now students are looking forward to meet the VC and put forth their case.