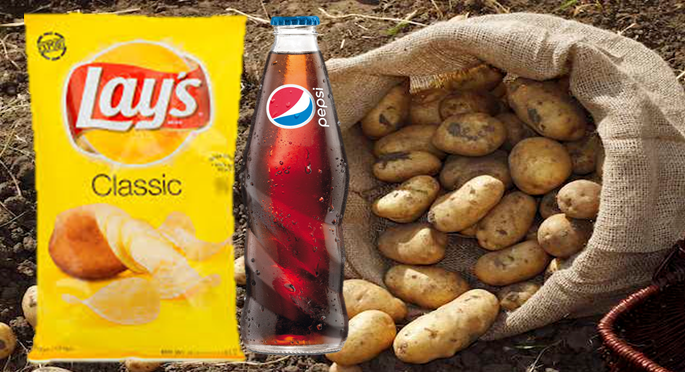 Several farmers from the state of Gujarat have been suffering due to a legal tussle with the corporate giant PepsiCo.  PepsiCo. had sued several farmers in Gujarat for cultivating the FC5 variety of potato, which the company cultivates for the production of its popular Lays potato chips. The company had earlier sought a fine of Rs 1 Core from each of the farmers for infringement of its exclusive right to cultivate the specific potato variety.  There was a hearing in the case in Ahmedabad on Friday, where the company has decided to settle the case with the farmers through mutual arrangements. The arrangement requires farmers to purchase the specific variety of potato seeds from the company and later sell the produce to the company itself.

Earlier this month the company sued nine farmers in Gujarat for rights infringement and illegally growing a variety of potato that has been exclusively registered by the company for their use.

The corporate giant filed a 4.2 million law suit and further demanded for a compensation of 10 million each from the farmers. The company claimed that the crop variety was registered for their brand Lays and hence was illegally grown by the farmers.

Immediately after the news came to public domain farmers association and rights activist in India challenged the arbitrary move of the MNC. The activist group demanded the government of India to intervene in the matter and do justice.

The advocates of the farmers accused the company for illegitimately targeting them.

The case was heard by the Ahmedabad commercial court on 26th April 2019 where PepsiC0. offered an out of court settlement.

The settlement suggests that either the farmers agree to their collaborative farming program and agree to engage with the company where they are entitled to get the seed variety from the company and sell back the produce to the company. Or the farmers should sign an undertaking stating that they will not use the registered crop variety and destroy the existing stock.  The farmers have not agreed to any of the offer yet instead they have asked for more time from the court.

The next hearing of the case is due in Ahmedabad court on June 12th. Farmers’ rights activists have condemned the law suit filed by PepsiCo. and issued a statement saying that law favors the corporate and the law suit will only make the lives of the farmers difficult. The farmers’ rights activists have accused the MNC’s for arbitrarily introducing GM seeds which have led to the dying of local variety crops in Gujarat.

The case points out to the sustained conflict between indigenous needs and the market-oriented and extremely profit-driven motives of multi-national companies. The absence of sustained measure to protect the rights of local farmers accompanied by lack of information, have often landed our farmers in trouble.

The need for an agricultural nation like ours is to strike the right balance between the expansion of the neo-liberal market and the safety of farmer livelihoods. When there is a growing absence in balance, it is the ordinary cultivator who bears the brunt of it. The dangers of corporate invasion of local agricultural land, the absence of awareness among farmers and the lack of government support have to be collectively seen as causes for the decadence of Indian farmers.