Education is the foundation for an equitable and just social order but ironically it is seldom seen as an issue that determines public discretion at the time of voting, will things alter in this election season?

Dolashree Mysoor is an LLM graduate from the University College London and works as a research associate at the Centre for Law and Policy Research, Bengaluru.

[dropcap]W[/dropcap]hen India voted in 2014, there was fervor around school education. Both the Bharatiya Janata Party (BJP) and Indian National Congress (INC) had proposed substantial reforms to the school education system.

To illustrate, the BJP’s 2014 manifesto proposed systemic reforms by articulating the need for modernization of madrasas, re-vitalizing the mid-day meal scheme and promoting enhanced access to education for girls and children with special needs.

The INC, which brought into force the Right of Children to Free and Compulsory Education Act, 2009 (RTE Act), focused on reducing the number of children dropping out of schools, promoting access to education in strife-ridden areas in the North East, universalizing secondary education and ensuring RTE compliance. Though the 2014 elections were fought on other issues, school education received substantial focus from the major national parties.

These questions are important because we vote as citizens, but also as parents, teachers and other stakeholders in education. Though manifestos are not binding, they indicate a political party’s vision for reforms – an important document for voters.

What do political parties have in store for school education in 2019?

In the last five years, the incumbent government has attempted systemic reforms in education by adopting a consultative approach to formulate a new education policy that is yet to see the light of day. Notably, the BJP government introduced amendments to the RTE Act which now allows schools to detain or fail students in a particular class if they do not pass the requisite examinations – a move that has been severely criticized by educationists.

The BJP’s educational vision in the 2019 manifesto may best be described as ‘thin’ for a party that is in power. They have proposed five key reforms in school education – first, they take the view that we have achieved equity in access to education in India, therefore improving the quality of education through class-based learning objectives and teacher training is required. They advocate teacher education reforms by establishing a National Institute for Teacher Training without a view on how to reform the existing National Council for Teacher Education.

The BJP hopes to establish a programme for ‘talented’ children to allocate more resources to them so that they are enabled to develop skills of lateral thinking under the “Prime Minister Innovative Learning Programme”. Needless to say that through this proposal the BJP has completely lost sight of the fact that more resources ought to be allocated to help children who are lagging behind to provide them with a more conducive learning environment! Much like the INC, the BJP proposes to increase the number of Navodaya Vidyalayas (NVs) in the country. Finally, the BJP seeks to introduce smart classrooms and promote the use of technology in the classroom.

Though the INC’s 2019 manifesto identifies some key focus points for reforms, their 2019 manifesto is not radically different from their previous manifesto. We may notice that issues of out of school children, technology in the classroom, committing 6% of the GDP to education (although it is unclear how much school education will receive), reforms in teacher education by increasing the number and quality of teacher education institutions, regularization of contract teachers, allocating funds for hostels, school infrastructure and other facilities in educationally backward districts were very  much a part of their earlier manifesto in some form.

What is striking about the Congress’ 2019 manifesto is two key reforms they propose- first, they would like to move the subject of education from the concurrent list to the state list under the 7th schedule of the Constitutions; and second, they hope to widen the scope of the right to education to include all school-goers from Class I to Class XII. The highlight of this manifesto is probably the Congress’ recognition that all is not quite well in school education in relation to access, equity and quality.

The BJP begins with the assumption that India has achieved access and equity to education, therefore we now need to focus on providing quality education. Yes, we have more children in schools today, but what is the nature of this access to education? Despite the RTE Act, the existing system remains underfunded and under-represented by students from marginalized groups in mainstream schools. SC, ST, disabled and female students are more likely drop out of school at the upper primary and secondary levels. Appallingly, the representation of children with disabilities stands at 1.1 percent in relation to total school enrollment (DISE Analytical tables 2016-17).  Therefore, the statement in the BJP manifesto that we have achieved equity and access in education for all is fallacious.

The INC has proposed major institutional reforms in education – specifically, they would like to move the subject of school education from the concurrent list in the Constitution to the state list. Such a move would ultimately lead to states having more power to legislate and regulate school education. However, what remains to be seen is how more power in the hands of the states affects the variation in the state-articulated aims of education, access to schooling facilities and educational outcomes across the country.

Both national parties have articulated the need for focusing on quality education and increasing the number of Navodaya Vidyalayas (NV) that are exclusive schools for meritorious students from rural areas. While NVs have been fairly successful in imparting quality education to students, it is important to note that NVs are not institutions that enable universal access to quality education! Rather than spending resources on building more NVs, political parties ought to show a basic level of commitment to allocating more resources to existing government schools.

Neither of the manifestos appears to be concerned about the closure of government schools in many states due to decreasing enrolment in these schools.

The INC has indicated that they aim to make all school RTE compliant – this begs the crucial question whether the RTE applies to government schools in India at all.  Besides, merely widening the scope of the right to education to include students from class I to class XII may be inadequate if the INC does not have a legal proposal to amend the RTE Act to hold government and private schools to the same infrastructural standards.

The BJP’s contribution to ensuring better quality schools is restricted to technology and teachers, they don’t address the issue of school infrastructure. The party has refused to even humor the question of government school reforms.

The focus of both parties on improving the quality of education by insisting on using technology in the classroom has lost sight of the fact that only 9.57% of primary schools and 44.4% of upper primary schools in the country have access to both electricity and computers (DISE Analytical Tables 2016-17).

Crucially, while both parties have glibly promised that they will reform teacher education, neither has addressed the problem in any meaningful way. The BJP proposes to establish a National Institute for Teacher Training to impart teacher education through a four-year programme. Interestingly, the BJP appears to be contradicting its own stand in 2014 on four-year undergraduate programmes (FYUP) and the storm it had created over the FYUP offered by Delhi University when the MHRD was led by Smriti Irani.

The INC plans to empower the University Grants Commission to fund teacher education. In all fairness, it must be noted that the Congress’ manifesto does address the issue lack of proper teacher training institutions and identifies the goal of increasing the number and quality of teacher training institutions. However, these measures appear superficial because they do not adequately address the systemic maladies affecting the teacher education system as identified by the Justice J. S. Verma Commission Report.

Predictably, the only party that speaks about the problems in the public schooling system and the need for a common schooling system in India is the Communist Party of India (Marxist). Unfortunately, this party has neither been in power as a union government nor has it contended with the challenges or complexity of the Indian educational system.

The experiences of both the major national parties in governing a reformed education system under the RTE Act over the last decade are not reflected in the manifestos- there are no proposals for systemic educational reforms, developing the capacity of public schools or a well-conceived plan for reforming teacher education.

Clearly, the two leading national parties have not capitalized on learnings from their experience of governing education in India. Sadly, citizens who also vote as parents and teachers are left with little choice between vague educational reforms proposed by the BJP and the INC’s old wine in a new manifesto. Perhaps, a cautious citizen voting on education may lean towards the INC’s more detailed account of what they have in store for school education. 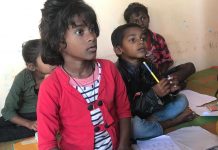