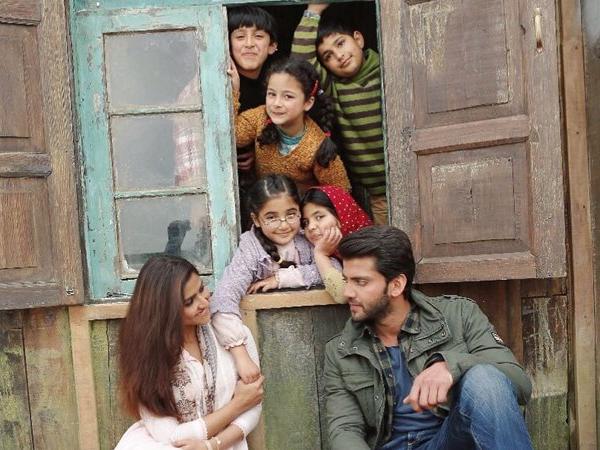 Notebook is a recent Bollywood film directed by Nitin Kakkar and produced by Salman Khan. The main theme of the film is a love story wherein the protagonists fall in love without even having seen each other.

The film revolves around an ex-army officer named Kabir who joins a deserted school as a teacher. Amidst the lack of infrastructure and only a few children, it becomes a challenge for Kabir to capture the imagination of his students. It is here that Kabir finds the dairy of the previous year’s teacher Firdaus. As he reads through Firdaus’s dairy he finds that he continues to fall in love with her.  The film’s cinematography is enriched by the fact that it has been shot in Kashmir and the school is located in between a beautiful lake. The scenic locales are a treat.

Within half an hour into the movie and the viewer gets the sense that she has entered into a world of “UTOPIA”. A school based in the midst of a lake with no other staff but just a teacher, without any of the basic facilities and with just seven children. The characters, the settings, the situations, and the twists and turns in the movie all seem like a completion of a fairy-tale.

The movie is a good watch for children, as it reminds us to dream. Children dream because they are devoid of fears and the complicated realities which come into play in the real world. Adults should also watch the movie to once again feel the difference between ‘what is’ and ‘what should be’.

First and foremost, the movie portrays the existing loopholes in the education System. The quest for marks, the obsession with success and failure, the race to complete the syllabus, the emphasis on learning by mugging and the absence of a relaxed and student friendly discourse are some of the issues about the education system that the movie throws light on.

When Firdaus, the lead character tries to teach students about the ‘force of buoyancy’ by making two students enter water, she is rebuked by the administration of the school and asked to teach students within the class itself like the other teachers.

Although, her way of making children understand the concept may seem a bit too adventurous but it certainly hits its intended target and exposes the harsh reality. Children are just taught theory without proper practical lessons and expected to mug up things without ever actually observing the phenomena empirically.

I studied in one of the top ranking schools of the country, but I continued to feel the absence of any linkage between theory and practice.

We were made to do practical based on topics which were yet to be taught in the class and some of the ones which were taught were actually never taken up in the laboratory. During my Bachelors of Technology from one of the ‘Institutes of National Importance’ we grappled with broken machines and non-functional laboratories. No wonder that India has not been able to produce quality research papers when compared with some of the top universities across the globe.

Another facet which came out during the course of the movie was how teachers treat children especially younger ones in the school. The movie reminds of ‘Ram Shankar Nikumbh’ from ‘Taare Zameen Par’ and how a little sensitivity, understanding, care and love can help even children with special needs. Kabir in the movie who is not that academically sound and has no experience of teaching before tries to create fear in the minds of the children and then command respect via it. Children who were living in the war-torn areas of the Kashmir valley were in the habit of seeing much more real fear on a daily basis in their lives and were not affected at all by Kabir’s antics and he fails miserably. After reading Firdaus’s dairy and knowing how she won students’ hearts, he follows her and succeeds in winning their trust. This small incident shows how primary level students need soft helping hands and not hard stick laden hands.

The movie also depicts how the lives of common people especially children who deserve quality health and education gets affected by conflict and insurgency in an area. Imran who was very brilliant in his studies was not supported by his father at all in this endeavor because his father had lost all hope in the state and its institutions and for him revolution against the state to get their due share was the only way forward. School was nothing more than a waste of time for him. This example shows a classic case of how innocent children with bright prospects are trapped into the activities of rebel groups and sooner or later become an enemy of the armed forces. The lives that could be an asset for the country go against the same country and most of the lives end up being taken in safeguarding the interests and integrity of the nation. There cannot be a bigger travesty than this. The movie also flags the issue of forced, painful and brutal exodus of Kashmiri pandits from the valley which had not been taken up much hitherto in the mainstream media.

The character of Firdaus’s boyfriend in the movie presents a typical male from the society with an insatiable urge to control women on his own terms and conditions. The way he wants her to leave the school and children she loves makes the case for less of fear of her well-being and more for his own life goals. He knows she is a great girl and does not want to lose her but at the same time wants her to work at the school he chooses and apparently is in a separate sexual relationship just before their marriage as well.

The way he scolds her for teaching children outside the classroom shows that he does not back her for her choices and decisions but wants her to mold herself completely for him, school and society. This is a typical quintessential tale where the men expect women to adjust and sacrifice themselves completely. On the other hand, the lead character Firdaus, is a woman who wants to have her own identity as a woman and more importantly as a person, as someone, and not just as a wife, sister or mother. For her freedom means empowerment to take her own decisions in life, do what makes her satisfied and to have her own purpose in life.

Another refreshing thing in the movie was the ‘Old School Romance’ portrayed. The hero and heroine fall in love with each other without even seeing each other once but just by reading each other’s thoughts in the dairy. In the era of movies showing meetings starting on Tinder or in pubs, this was a welcome change.

Finally, the most important reminder the movie makes clear is about the plight of Kashmir and what we have made of it.The movie gives us a signal that human development and especially investment in education would help in bringing normalcy and peace again in the valley. Those who attempt to conquer hatred by hatred are like warriors who take weapons to overcome others who bear arms. This does not end hatred, but gives it room to grow. But, ancient wisdom has advocated a different timeless strategy to overcome hatred. This eternal wisdom is to meet hatred with non-hatred. The method of trying to conquer hatred through hatred never succeeds in overcoming hatred. But, the method of overcoming hatred through non-hatred is eternally effective. That is why that method is described as eternal wisdom. People like Firdaus’s father who saved Kabir’s house and Kabir who was willing to lay his life to save the dream of the children, are rays of hope in this darkness.  The film can easily be enjoyed by those who find themselves captivated by old-school romance and good music. Had the screenplay and the narrative been more exhaustively laid, the film could have been made much better. The film captures the beauty of Kashmir quite eloquently.