In ‘The Hour of Lynching’ the directors choose to play with a theme that is contemporary, deeply political and a concern that the nation cannot afford to look away from.  Filmmakers Shirley Abraham and Amit Madhesiya build their film based on a particular case study associated with the act of lynching and through it make a very important commentary on the malaise impacting the nation.  The film is premised on sound research and good directorial skills which ensure that the gravity of the issue is retained, the message about the destructive powers of lynching is made clear and a very strong impact is left on the viewer’s mind.

The film portrays what a family, a victim and an entire society goes through when the lynching of a person unfolds.  The film builds on a single case study and tells us what Muslims and Dalits have undergone in the past few months as the instances of lynching exemplified multi-fold.

It was in the month of July, 2018 that Rakhbar Khan from Nuh-Mewat region of Haryana was killed as he was transporting two cows. The filmmakers have captured the aftermath of Khan’s death and the kind of implications it had for his family and community.  The film depicts how Muslims like him were hunted down like dogs and cats and their lives were engulfed in hatred and indignity.

The local cow vigilantes said that they had nothing to do with his death but openly say that they can go to any extent to protect the nation’s cow population. It is not rare for one to understand the deeply embedded hatred that Hindu nationalist leaders have for the Muslim population in the nation and the film carefully depicts a Hindu leader addressing a large rally by asserting that sacrificing Muslim lives for the wellbeing of the Hindus isn’t wrong.

This timely and wonderfully made documentary shows us the immense pain and difficulty that many ordinary Muslims are facing because of the widespread political culture of hatred against them. Lynching in the name of cows and social media rumours circulating about the consumption of cow meat have led to the deaths of many Muslims in the last couple of years.

‘The Hour of Lynching’ is a film that speaks of a contemporary concern and has been made independently. The film has been supported by the Pulitzer Centre and Field of Vision among other groups.

In recent times we have also witnessed some other very good documentaries about lynching and cow vigilantism which is on the rise.

Films such as Reason made by Anand Patwardhan and Lynch Nation directed by Shaheen Ahmed and team have left us wondering how deeply engraved the problem of lynching has become and what we as a society can do to address it.

These films throw light on what it actually signifies to be lynched, what a man/woman whose family members have been lynched feels like, and what does one do when the nation-state remains silent despite the injustices.   We see how Rakbar’s family tears apart and they are no longer able to cope with the challenges that life throws at them.

The documentary suggests that in the aftermath of the lynching life no longer remains the same for the Muslim family and they are wounded for life.

The hate machinery of the right wing professors were seen supporting the incidences of lynching and seen legitimising the killing. The issue that the film focuses on is lynching in India but it also compels us to think about the bigger concerns of intolerance, parochialism and injustice that plague the world.  The film may be about the lynching and death of Rakbar but it surely makes us reflect on global violence and intolerance towards the minority population in general. 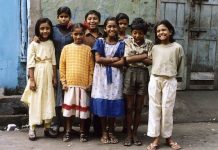 Born into Brothels: Calcutta’s Red Light Kids- Understanding Humanity and Compassion Through the Eyes of a Filmmaker