This is the second part of the series ‘A Documented Society’. In the first part, I had attempted to create a fictional account of what a society looks like when the existence of its people depends on a set of documents or even a single document that may define the very basis of how one would be viewed (or not viewed) by the society and its power-holders.

This part of the series is inspired from my real life experiences of coming in contact with such a society. Very near to my place of residence is an open space where some families have been staying since decades in small kutchcha houses they have built for themselves. Their squalid and dismal living conditions (which continue to remain the same for decades together) are a topic of a separate discussion altogether, however, here I would like to discuss my (and my husband’s) experience when we tried to get a kid living here, admitted to school.

I will call the kid ‘K’ for the purpose of this article. K is a 9-year old boy who has lived in this place all his life. His mother works in nearby residential societies as house-help and his father works as a day laborer at a place that is at some distance from their place of residence. He travels to his workplace via local trains – going for work early morning and returning late at night – for six days of the week. K used to study in a nearby low-fee paying private school for some time. However, he told us that he dropped out of the school due to regular fights he used to have with other kids of his class, for some or the other reason. When we met him, he had not been going to school since a year.

Initially, we thought of teaching K (and some other younger kids from the area) on our own. But since we could do this only on the weekends, and it was necessary for him to be a part of the regular education system, we decided that we will get him admitted to a nearby school. We thought of getting him admitted to a low-fee paying private school which was near his place of residence so that it would be easy for him to commute daily.

We approached the concerned school to enquire about the process we would need to follow and the requirements for admission. The first official that we met, informed us that the Birth Certificate of the child and his Aadhaar card shall be required for admission. However, K did-not have an Aadhaar card. We duly informed the official and requested her to suggest an alternative. She simply stated that she could not do anything in the absence of Aadhaar card. We then requested to meet the Principal of the school, and were granted the meeting.

We met with the Principal and explained to him the entire situation. He repeated what the other official had told us. In the meantime, we had arranged for a Supreme Court ruling that had decreed that no school shall deny admission for want of Aadhaar card. We had carried a copy of the ruling along with us, and mentioned to the Principal about the ruling. At this, he got a bit agitated and told us that he was already aware of the same. Yet, he stated that he could not do anything because it was the Government who insisted on the Aadhaar number being quoted on every admission form. He advised us that we could take up the case with the local Gram Panchayat office.

Not wanting to be dismissed so soon, we told him that there was a provision in the Supreme Court ruling that stated that if a child does-not have an Aadhaar enrolment, it was the onus of the school to apply for the same and in no condition could the child be denied admission on this basis. On hearing this, the Principal got even more agitated and questioned us as to why we thought that the school will take such pains for a child. (I still don’t have an answer to this question asked by a Principal of a school established to provide education to children – that education which is their right. The irony of the question still haunts me). By this time, however, we had understood that he was least interested in admitting the child. Still, in a last-ditch effort, we told him that we would apply for the Aadhaar card of the child in a week’s time and till then he should agree to give a provisional admission. To our surprise and relief, he agreed. We left after getting his assurance, intending to bring along K and his mother the next time, for completion of the formal admission process.

When we reached the school the next time, along with K and his mother, another problem was waiting for us. Just to recollect, I had mentioned earlier that K is 9 years of age and had remained out of school for a year. He says that he was in Standard I or KG (he and his parents don’t seem to be sure) when he dropped out. According to his age, he should have been in 3rd or 4th standard now. During whatever little teaching sessions we had taken with him, however, we found that if admitted to anything over 2nd standard, he will find it very difficult to cope with the studies. So we requested the school authorities to admit him to 2nd standard at the most. As expected, we were again advised to meet the Principal with our request.

We again went to meet the Principal, taking K along with us. Physically, K is a bit tall for his age. The Principal looked at him and straight away refused to accede to our request. He told us that if K was admitted even to 2nd standard, he would ‘create trouble’ for other children. What this meant was absolutely unclear to us and the Principal could not explain to us despite trying. He just kept on repeating that K would ‘create trouble’ for the younger kids and would not be a good influence for them. We had been in touch with K for two-three weeks now and not for a single moment had we felt that he could be of any trouble to anyone just for the reason of his being a 9 year old kid who was out of the education system and wanted to somehow get back into it. He has younger siblings and many other younger kids where he stays, who are his friends and playmates, just like any other normal kid. However, the Principal, at this stage, refused to understand any of this and point blank refused to admit K. However, magnanimously, he suggested that we could try for admission in a Government school if we wanted.

We had not approached the government school till now because this private school was the nearest to K’s place of residence. We didn’t want the distance to become a reason for his not attending school regularly. However, now we were forced to look at a Government school option that wouldn’t be prohibitively far from his place. We did so and found one. More about that in the next part of this series.

In the meantime, however, I would want to leave all of you with some food for thought:

The above questions are for each one of us to answer. We will need to think through these issues at some point of time, sooner rather than later. K’s story does have a positive ending which I shall narrate in the next part, however, the larger issues brought to the forefront above will need to be urgently tackled, lest it is too late. 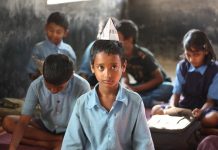