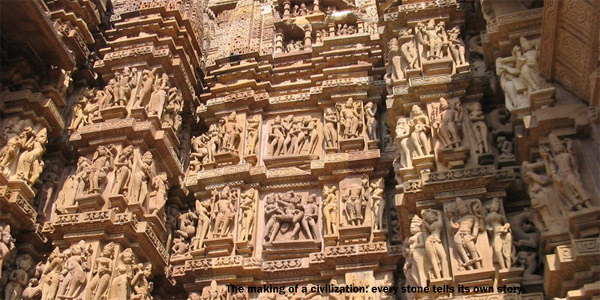 India was in my blood and there was much in her that instinctively thrilled me. And yet I approached her almost as an alien critic, full of dislike for the present as well as for many of the relics of the past that I saw. To some extent I came to her via the West, and looked at her as a friendly westerner might have done. I was eager and anxious to change her outlook and appearance  and give her the grab of modernity. And yet doubts arose within me. Did I know India? –I who presumed to scrap much of her past heritage? There was a great deal that had to be scrapped, that must be scrapped; but surely India could not have been what she undoubtedly was, and could not have continued a cultured existence for thousands of years, if she had not possessed something very vital and enduring, something that was worthwhile. What was this something?

I stood on a mound of Mohenjo-daro in the Indus Valley in the north-west of india, and all around me lay the houses and streets of this ancient city that is said to have existed over five thousand years ago; and even then it was an old and well-developed civilization. … Astonishing  thought: that any culture or civilization should have this continuity for five or six thousand years or more; and not in a static, unchanging sense, for India was changing and progressing all the time. She was coming into contact with the Persians, the Egyptians, the Greeks, the Chinese, the Arabs, the Central Asians, and the peoples of Mediterranean . But though she influenced them and was influenced by them, her cultural basis was strong enough to endure. What was the secret of this strength? Where did it come from?

I read her history and read also a part of her abundant ancient literature, and was powerfully impressed by the vigour of the thought, the clarity of the language, and the richness of the mind that lay behind it. I journeyed through India in the company of mighty travellers from China and Western and Central Asia who came here in the remote past and left records of their travels. I thought of what India had accomplished in Eastern Asia, in Angkor, Borobudur, and many other places. I wandered over the Himalayas, which were closely connected with old myth and legend, and which have influenced so much our thought and literature. My love of the mountains and my kinship with Kashmir especially drew me to them, and I saw there not only the life and vigour and beauty of the present, but also the memoried loveliness of ages past. The mighty rivers of India that flow from this great mountain barrier into the plains of India attracted me and reminded me of innumerable phases of our history. … the story of the Ganges, from her source to the sea, from old times to new, is the story of India’s civilization and culture, of the rise and fall off empires, of great and proud cities, of the adventure of man and the quest of the mind which has so occupied India’s thinkers, of the richness and fulfillment of life as well as its denial and renunciation, of ups and downs, of growth and decay, of life and death.

I visited old monuments and ruins and ancient sculptures and frescoes—Ajanta, Elora, the Elephanta Caves, and other places—and I also saw the lovely buildings of a later age in Agra and Delhi, where every stone told its story of India’s past.

In my own city of Allahabad or in Hardwar I would go to the great bathing festivals , the Kumbh Mela,and see hundreds and thousands of people come, as their forebears had come for thousands of years from all over India, to bathe in the Ganges. I would remember descriptions of these festivals written thirteen hundred years ago by Chinese pilgrims and others, and even then these melas were ancient and lost in an unknown antiquity. What was the tremendous faith, I wondered, that had drawn our people for untold generations to this famous river of India?

These journeys and visits of mine , with the background of my reading, gave me an insight into the past. To a somewhat bare intellectual understanding was added an emotional appreciation, and gradually a sense of reality began to creep into my mental picture of India, and the land of my forefathers became peopled with living beings, who laughed and wept, loved and suffered; and among them were men who seemed to know life and understand it, and out of their wisdom they had built a structure which gave India a cultural stability which lasted for thousands of years. Hundreds of vivid pictures of this past filled my mind, and they would stand out as soon as I visited a particular place associated with them. At Sarnath, near Benares, I would almost see the Buddha preaching his first sermon, and some of his recorded words come like a distant echo to me through two thousand five hundred years. Ashoka’s pillars of stone with their inscriptions would speak to me in their magnificent language and tell me of a man who, though an emperor, was greater than any king or emperor. At Fatehpur-Sikri, Akbar, forgetful of his empire, was seated holding converse and debate with the learned of all faiths, curious to learn something new and seeking an answer to the eternal problem of man. …

And this panorama of the past gradually merged into the unhappy present, when India, got all her past greatness and stability, was a slave country, an appendage of Britain, and all over the world terrible and devastating war was raging and brutalizing humanity. But that vision of five thousand years gave me a new perspective, and the burden of the present seemed to grow lighter. … The world also will survive the horror of today and build itself anew on fresh foundations.