In a latest update from Srinagar, CPI(M) general secretary Sitaram Yechury and his CPI counterpart D. Raja were detained at the airport. The two leaders were visiting Srinagar for a meeting with party colleagues. Upon reaching the airport they were shown a legal order which prohibited their entry into Srinagar.

They said that even escorted entry into the city had not bee permitted by the order shown to them. They continued to try and negotiate with the security officers at the airport.

Both had come to Srinagar after having written to the Jammu and Kashmir Governor Satya Pal Malik on August 8th requesting him to facilitate their journey.

Yechury expressed disappointment at the fact that despite having written to the Governor, they had not been allowed entry into Srinagar. On August 8, Congress leader Ghulam Nabi Azad was also detailed at Srinagar airport and sent back to Delhi. Rapid developments are taking place in the erstwhile state of Jammu and Kashmir after the Centre’s major crackdown and scrapping of Article 370. While the political climate in the erstwhile state has continued to remain tense, it has been reported that 25 separatists have been airlifted from Srinagar and shifted to Agra.

The Centre has argued that those who have been airlifted were ‘potential troublemakers and stone-pelters’. These members are also allegedly involved in Kashmir’s separatist movement. They have been shifted to Agra Central Jail. The government has imposed restrictions in the erstwhile state after the abrogation of Article 370 and the division of the state into two union territories. 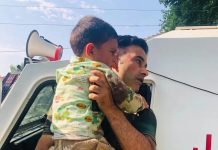 Child Weeps Near Body of Dead Grandfather, Shot During Ceasefire at Sopore, Jammu and Kashmir