Many recent reports point out that our food consumption and production have a considerable impact on the environment. The need of the hour, therefore, is that food needs to be responsibly sourced and consumed.

It has been found that the way our food is being produced, it contributes to climate change, eutrophication and acid rain, as well as depletion of biodiversity. It is also a considerable drain on other resources, such as nutrients, land area, energy, and water.

How our consumption impact the environment?

Nowadays there is a big focus on food that produces the most emissions, more carbon-footprint, but water-scarcity footprint, also has a huge environmental impact according to many studies.

A water-scarcity footprint consists of two elements: the litres of water used, multiplied by a weighting depending on whether water scarcity at the source is higher or lower than the global average.

In a research recently published in the journal Nutrients, the water scarcity footprints of the diets of 9,341 adult Australians, involving more than 5,000 foods, were studied. The researchers measured both the amount of water used to produce a food, and whether water was scarce or abundant at the location it was drawn from.

It was found the average Australian’s diet had a water-scarcity footprint of 362 litres per day. It was slightly lower for women and lower for adults over 71 years of age.

Foods with some of the highest water-scarcity footprints were almonds (3,448 litres/kg), dried apricots (3,363 litres/kg) and breakfast cereal made from puffed rice (1,464 litres/kg).

In contrast, foods with some of the smallest water-scarcity footprint included wholemeal bread (11.3 litres/kg), oats (23.4 litres/kg), and soaked chickpeas (5.9 litres/kg).

More surprising fact was, of the 9,000 diets studied, 25% of the water scarcity footprint came from discretionary foods and beverages such as cakes, biscuits, sugar-sweetened drinks and alcohol. They included a glass of wine (41 litres), a single serve of potato crisps (23 litres), and a small bar of milk chocolate (21 litres).

From previous studies it had been found that these foods contribute around 30% of dietary greenhouse gas emissions in Australia.

The second highest food group in terms of contributing to water-scarcity was fruit, at 19%. This includes whole fruit and fresh (not sugar-sweetened) juices. Dairy products and alternatives (including non-dairy beverages made from soy, rice and nuts) came in third and bread and cereals ranked fourth. 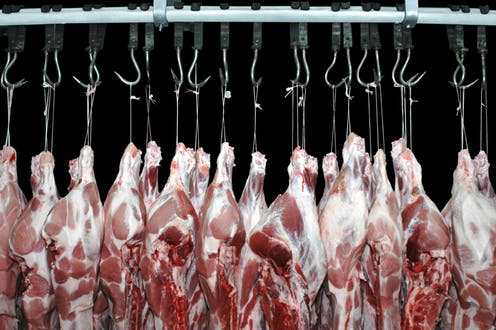 The consumption of red meat – beef and lamb – contributed only 3.7% of the total dietary water-scarcity footprint. These results suggest that eating fresh meat is less important to water scarcity than most other food groups, even cereals.

What does this entail for our future?

Now, the food system, world wide, accounts for around 70% of global freshwater use. This means a concerted effort to minimise the water used to produce our food – while ensuring our diets remained healthy – is the need of the hour.

According to the scientists, as population growth, climate change and environmental degradation continue to increase, changing our farming practices could hold the key to the solution. Water-scarcity footprint reductions could also be best achieved through technological change, product reformulation and procurement strategies in agriculture and food industries.

More importantly, cutting out discretionary foods from our diets would be the first step to lowering the water footprint of the food we eat, as well as the greenhouse gas emissions of production.

A medium sized apple, for instance, contribute a water-scarcity footprint of three litres compared with more than 100 litres for a 250 ml glass of fresh orange juice. This is reflective of the relative use of irrigation water and the local water scarcity where these crops are grown. Also, it has been found that more fruit is required to produce juice than when fruit is consumed whole.

Looking at such findings, the only question that arises here is, with a population predicted to reach 9 billion by 2050, how do we sustainably produce enough food for it?

Some scientists predict we will need 70-100 percent more food by that point. Continuing population and consumption growth will mean that the global demand for food will increase for at least another 40 years. Growing competition for land, water, and energy, in addition to the overexploitation of fisheries, will affect our ability to produce food, as will the urgent requirement to reduce the impact of the food system on the environment. The effects of climate change are a further threat. But the world can produce more food and can ensure that it is used more efficiently and equitably. A multifaceted and linked global strategy would therefore be needed to ensure sustainable and equitable food security.

With an expanding population, mass land use for farming could no longer be an option. That’s why the trend of vertical farming is rising across the globe. The first commercial vertical farm was set up in Singapore in 2012 – it allows for the indoor production of short-stemmed leafy greens all-year-round and, now, the UK is following suit.

And then there’s organic farming. Excess fertiliser use is one of the biggest causes of pollution in our oceans. Compared with conventional agriculture, organic farming uses fewer pesticides, reduces soil erosion, decreases nitrate leaching into groundwater and surface water, and recycles animal wastes back into the farm

Many farmers however still argue against its efficacy and does not want to invest the time required to show results from changing their use of pesticides so they consider it unworthy of any financial investment – but research confirms that organic farming creates more profit and yields healthier produce.

What role can you play in this?

Lastly for a sustainable future, we as individuals and as consumers need to get serious about changing our habits, moving to sustainable food practices. It is important to remember that our own food choices are part of the bigger picture, and we all need to take responsibility, starting now.

We as consumers generally lack the information that is required to choose core foods with a lower water-scarcity footprint and lower carbon footprint. This can be solved by demanding manufacturing companies to be transparent about such information on their products and consumers actively following up on it.