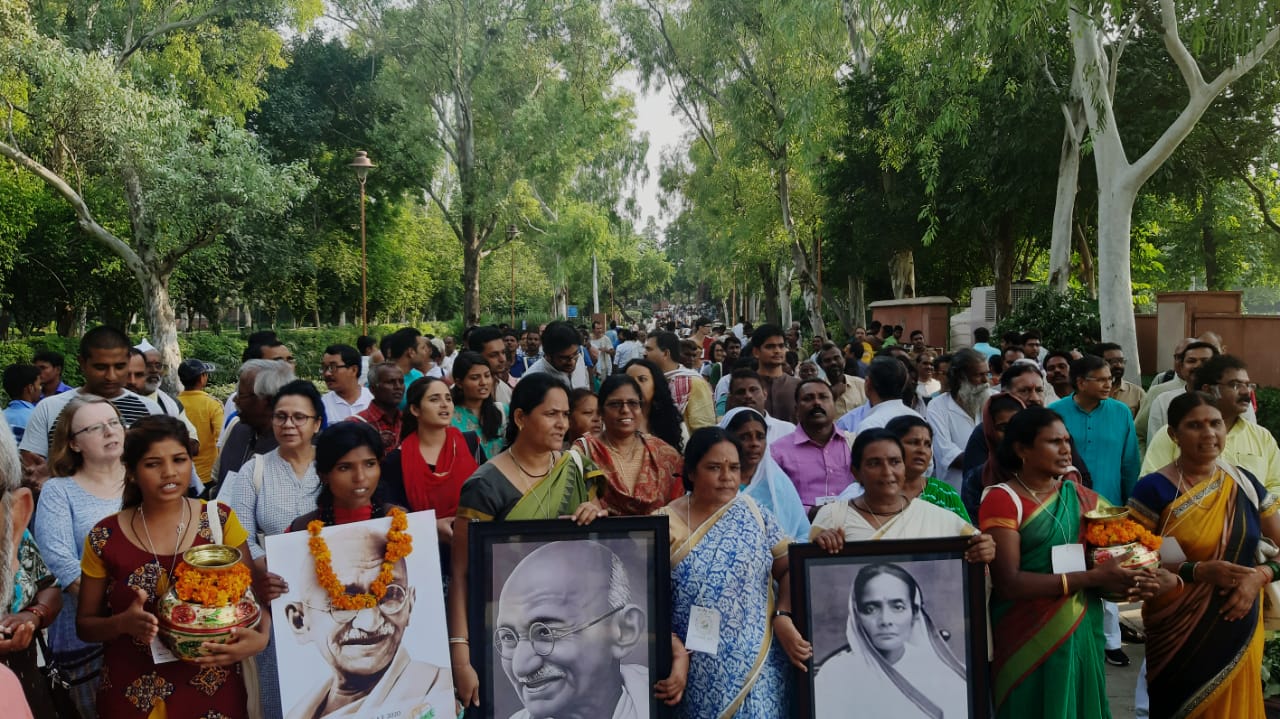 From October 2 to 4 very serious discussions and thoughtful speeches were mixed with song and dance, music and slogans as hundreds of people from nearly 30 countries of all continents gathered in Delhi for the inauguration of the Jai Jagat Global Peace March. This march will be  covering 10 countries during the next one year and will end on September 26 2020 World Peace Day in Geneva.

While 50 women and men constitute the core group of this march, supportive events will involve a much larger number of people . In its last phase a large number of people from many countries who are committed to peace, justice and environment protection will reach Geneva where the local authorities have agreed to host the marchers and their supporters.

The greeting of Jai Jagat is commonly used by Sarvodaya/Gandhian activists. It was most popularized by Vinoba Bhave. This implies an understanding and desire for welfare of all, or for the principle of universe as family, ignoring all narrow boundaries and discriminations. While this thinking has always been desirable, its importance has increased in recent times when narrow nationalism has been used in very dangerous ways in various parts of the world.

This march with such a broad perspective is also useful at a time when at  several Gandhiji related events the name of the great man is being taken time and again by those persons who at the same time persist with insulting and flouting his core commitments to communal harmony and non-violence.

This march is being coordinated by P.V.Rajagopal who as head of Ekta Parishad has been involved in numerous struggles of land and justice, particularly in the struggles of landless people and tribal people. In fact the representatives of land struggles of nearly a dozen countries, stretching all the way from  Cambodia to Ecuador, were present at the inaugural ceremony to extend support and encouragement to this march. Hence this march will be particularly important in terms of linking justice issues with peace concerns.

In addition environmental concerns particularly climate change and water crisis are also being emphasized in this initiative.

Once such a big initiative has been taken up it will be important to plan well for obtaining the best possible outcomes, particularly at a time when the world is threatened with a serious survival crisis.