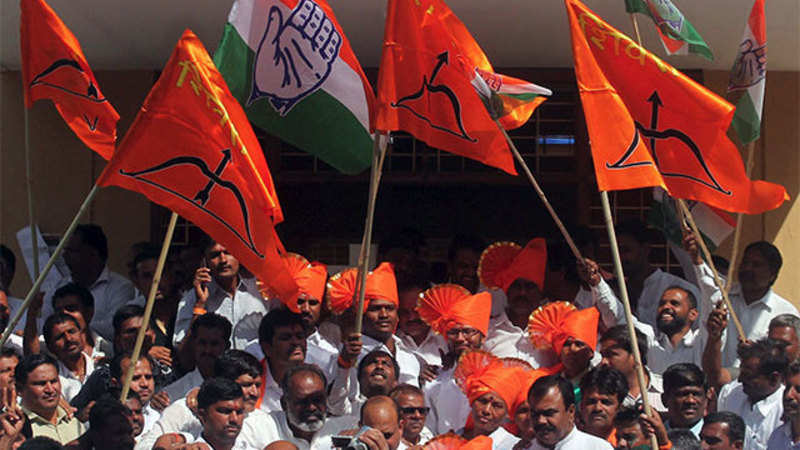 It has been more than three weeks since the results of the Assembly elections were out in Maharashtra but even today the state has not arrived at any decision about who will become its next chief minister. It was expected that the joint alliance of the BJP-Shiv Sena would form the government, having collectively crossed the majority mark required to form the government.

But a political impasse came into being in the state after the Shiv Sena’s decision of a 50:50 power sharing proposal led to immense political agitation and heated arguments among the right-wing political parties in Maharashtra.

The long-drawn conflict has led to the imposition of President’s rule in Maharashtra since Tuesday. The state will now be under President’s rule for the upcoming six months, this will give sufficient time to the key actors in the Maharashtra power play to redraw strategies.

Meanwhile, the Congress MLAs from Maharashtra who had been taken to a five star hotel in Jaipur would also be flown back into the state.

It is expected that leaders from all the major political parties would be engaging in a detailed discussion on the matter. While the President’s rule is imposed on Maharashtra, the Shiv Sena has repeatedly attempted to make an alliance with the Congress and the NCP. This comes after a five year long tug-of-war with its ally the BJP.

Thus even within a political culture where nothing is predictable, the decision of the Sena to form a partnership with the Congress is tough to imagine as they stand at two ends of the same political spectrum.

This action by the Sena has taken many by surprise. It is being believed that this unthinkable move is being guided more by political expediency than by ideological conviction.

The decision of the Shiv Sena to strike an alliance with the BJP comes after a prolonged five year long tug-of-war situation with the BJP.

The decision of the Sena to seek an alignment with the Congress and the NCP has multiple layers to it and no simplistic understanding can explain it.

What also shaped up to a great degree the developments over the last fortnight is that the outgoing chief minister of the BJP Devendra Fadnavis was extremely marginalised by the state and Central leadership of the BJP.

This is seen to form another crucial subtext that influenced the unfolding of events in the last fortnight.

The late Sena Chief Bal Thackery is known to have attempted to make the acceptability of his party more broad by projecting himself as the Hindutva mascot instead of portraying himself only as a messiah of the Marathis.

He wanted to attain this to expand the popularity of his party and transcend mere linguistic ties.

Moreover, in recent years there has been a reassertion of the Marathi identity as a core subtext of the Shiv Sena.

The Sena has undergone a major transition during the Maharashtra assembly polls, as this the first time Aaditya(son of Shiv Sena President Udhav Thackery) has become the first from his family to seek public office.

The candidature of Aaditya symbolised the Sena’s aspirations towards taking into its fold the needs and aspirations of the Maharashtrian youth for whom the party has little to offer at present.

The denial of the BJP to share power with the Shiv Sena on a 50:50 basis led Shiv Sena to seek an alliance with the Congress and the NCP.

Political analysts say that any alliance between the Shiv Sena and the Congress-NCP would certainly fail as there is a great degree of contradiction and ideological difference between the two.

Ideological disparities apart, the kind of astute politician that he is, Sharad Pawar knows quite well that the BJP and the Shiv Sena have already lost ground in Maharashtra, leaving the ground untouched for his political party to expand and emerge as a potential force in the region.

Moreover, the NCP and the Shiv Sena are known to be at odds in several regions of Maharashtra and have been in direct fight in over 57 assembly seats, these are directly competing against one another in most of Maharashtra.

Hence any adjustment between Shiv Sena and BJP may only be seen as a temporary move merely to keep the BJP out of power.

Also, the Congress finds itself in an extremely unsettling position as it is aware that if it supports the Sena for forming the Maharashtra government, it will expose it to allegations of majoritarian politics considering he fact that the Sena was involved in the 1992-1993 Mumbai riots.

This involvement may affect the Congress’s voter base among the minorities. The Congress also fears that an alliance with the Shiv Sena will bring about backlash from rest of the country especially from the northern belt. The Shiv Sena has been known for an anti-migrant, anti-north Indian agenda. Moreover, the attacks made by the Shiv Sena on the Gandhi family are also fresh in people’s memories.

But despite all the points we have discussed above, we must not forget that we are living in a post-ideology age and that there are many complex political factors that our leaders prioritise above commitment to distinctive political ideologies. The sole conviction that drives Indian politics today is the pursuit of power and holding on to it, ideology matters little and so does a sustained allegiance to ideology in this post-ideology age.

Should one defend Tablighi Jamaat?