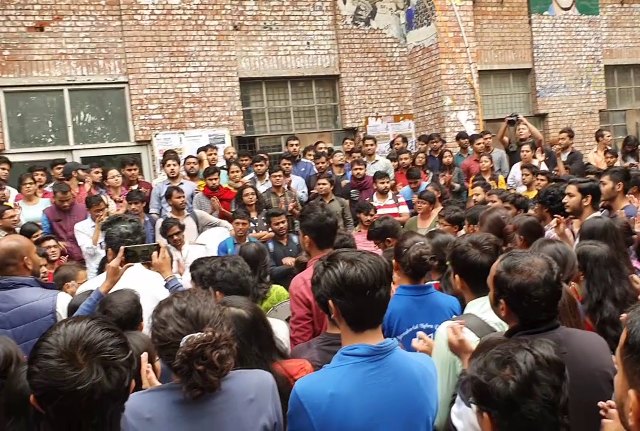 It has been more than two weeks since the students are protesting against the new hostel manual which was prepared without consulting the JNUSU (Jawaharlal Nehru University student union). The draft manual has increased the fee hike more than 999% where students who come from weaker economic section would not be able to sustain and would have just no option but to withdraw their admission.

After two weeks of protests thousands of students hit the streets on Monday 11th of November 2019 against this hostel manual. During this continuous struggle and crisis in JNU, students came to know that the vice chancellor has come to AICTE for university convocation. The students in the most spirited and democratic way went to the venue to register their demands and protests before the Vice President of India and the Union Minister for HRD who were the chief guests for the event, students in large numbers marched to AICTE where they were stopped by the Delhi police and CRPF.

The way police behaved with students is to be condemned, the students were hit multiple times by the Delhi police and also there was use of water cannon and lathi charge on students. What is further disturbing is the attitude of the VC and his constant denial  of the need of engaging with students directly instead of acting through the police.

The JNUTA Teachers’ Assembly held on 11 November 2019 at JNU began by unanimously adopting a resolution: (i) condemning the brutal police action against peacefully protesting JNU students today which severely injured a large number of them; and (ii) demanding that the JNU Vice Chancellor at whose behest this action was undertaken step down from his position. The police action was clearly only to defend the obstinate refusal of the Vice Chancellor to engage in any dialogue with students on their concerns.

Different universities across the world are also sending their solidarity message to the struggle of JNU. Jawaharlal Nehru University has been a Model University in India of public education where the students from deprived backgrounds could access higher education due to the low fee structure and subsidized food in hostels.

The current administration, who are acting as a mere agents who carry the political agenda of NDA government, have unleashed different projects to overturn this structure. Introducing self financing courses was one of the initial such steps. And now with making hostel a place where students of economically deprived sections cannot afford to be residence will further intensify the exclusionary model.

I would also talk about the JNU student politics and often people criticising JNU and calling it a hub of politics, “staying out of politics” or just  being annoyed of JNU student politics is a privilege action. This is the privilege that allows you to live non-political existence. “Kristen Tea” also talks about the wealth, your race, your abilities or your gender allows you to live a life in which you likely will not be a target of bigotry, attacks, deportation, or genocide. You don’t want to get political, you don’t want to fight because your life and safety are not at stake. It is hard and exhausting to bring up issues of oppression. the fighting is tiring. I get it. Self-care is essential. but if you find politics annoying and you just want everyone to be nice, please know that people are literally fighting for their lives and safety. You might not see it, but thats what privilege does.

I salute the protesting students in JNU and their fight/struggle is part of a larger movement against the commercialisation of education. We the students of Jawaharlal Nehru University demand the JNU administration to immediately withdraw all draconian amendments to the hostel manual and initiate a dialogue with the student union (JNUSU) and JNU students.

Further I appeal to all democratic and progressive sections in the country to extend your solidarity with all struggles against the criminal plan of commercialisation of education by the ruling class.

We the students of JNU will fight and continue our struggle until this draconian exclusionary hostel draft manual is revoked. This is not just fight of the current eight thousand students but also a fight for the upcoming generation who has dreamt to study in this university.We are JNU, and together we will fight, and we shall win.