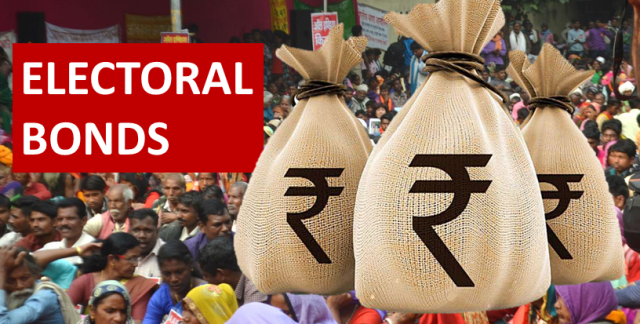 Over the last couple of days, the issue of electoral bonds has snowballed into a large scale political flashpoint. To protest against the government’s take on electoral bond and to assert their discontent, Congress MPs held a protest outside the parliament premises today and demanded that Prime Minister Narendra Modi break his silence on the topic. Several senior leaders of the Congress took part in the protest including Ghulam Nabi Azad, Anand Sharma, Manish Tiwari and Shashi Tharoor among others.

BJP was indeed the greatest benificiary of the scheme and the party that received 95% of the Rs 222 crore collected through the bonds in inaugural phase.

The issue of electoral bonds has indeed snowballed into a high political issue over the last couple of days as there have been reports that the Election Commission had reservations against them and they were overruled by the Modi government. As the country is debating over the viability and need for electoral bonds and the opposition is holding the government responsible for a preventable financial loss the country due to the adoption of the electoral bond scheme, it is important to break down the issue and look at its nuances.

Why are ‘electoral bonds’ being debated?

According to a report carried in the Huffington Post, the Modi government had given a proposal to the RBI to introduce electoral bonds. The RBI would have to entail an amendment to Section 31 of the RBI Act,1934 in order to accept the government’s proposal of introducing electoral bonds but the RBI rejected it and advised the government against it. The RBI also rejected the scheme because under the electoral bonds scheme the identities of the intervening persons/entities would not be known, although that of the buyer would be known. The RBI had strongly advised the government against the adoption of the electoral bond scheme and said that there was no need to disturb an already well established international practice in order to provide a formal mechanism to people, entities contributing to political parties, when this could easily be done through cheques, drafts or electronic transfer. However, the government rejected the bank’s reservations and carried on with its plan.

The mechanism was notified in January 2018 and ever since then 12 rounds of electoral bonds were introduced. The total amount collecting through this mechanism till October 2019 was Rs 6,18.7 crore.

We don’t have clear statistics as to which party gained the most out of the bonds. But documents show that the BJP got the lion’s share at least out of the electoral bonds issued in March 2018. It is believed that the BJP was indeed the greatest benificiary of the scheme and the party that received 95% of the Rs 222 crore collected through the bonds in inaugural phase.

Was the RBI Consultation Just a Formality?

Just a couple of days before unveiling the idea of electoral bonds, as a secretive way to channelise money into political parties, the Modi government pretended to take the opinions of the RBI into consideration. The RBI warned the government against the electoral bond idea but the government easily undermined all its suggestions. This has been revealed by previously unpublished documents and a report published in HuffPost India.

The RBI’S suggestions against the electoral bonds were not taken seriously and the Modi government had carried on with its plan despite the negative impact that it could bring about. In his 2017 speech before unveiling the electoral bond scheme, the then finance minister Arun Jaitley had quite convincingly spoken about the scheme. The electoral bond scheme was a controversial, legally-sanctioned instrument that would allow big corporations and other legal entities to anonymously funnel unlimited amounts of money to any political party of their choice.

The RBI had made its disapproval clear in this regard because it felt that if this was written into law, these anonymised electoral bonds wold legalise the power and influence that big corporations and business held over Indian Politics and open the opportunity for offshore money to illegally find way into the Indian political scenario. Today, any Indian company including shell companies that channel money to political parties or individuals as well as other legal trusts can anonymously buy as many electoral bonds as they wish and secretly hand them over to the political party of their choice. It is now also possible for foreign entities to anonymously route money into Indian politics.

The government got the concept of opaque donations in the form of electoral bonds legalised using its majority in the Lot Sabha and questionably bypassing the Rajya Sabha.

What will be Revealed and what will be Kept Away from the Voting Public?

The ordinary voting citizen of the country would not come to know which individual/country/institution has funded which party and to what extent. But the ruling government will have access to all the date regarding who is getting what from which source(through the SBI) and this can make it possible that those who are seen to be supporting the opposition parties or an ideology that is opposed to that of the ruling establishment can face harassment by the government. And this will become possible without the public knowledge or being able to notice a pattern of such harassment.

We all know that political parties do need money to survive and to make their presence felt within the political framework and there is no doubt or dispute about that. The debate is about how they should receive these funds.

Traditionally election funding in India has been done through cash, cheque and other forms of bank transfers. While the details of those who contribute through cash does remain anonymous and often features unaccounted cash. Contributions through the banking system may be transparent but also may result in problems. The main problem was that the transactions made through the banking system disclosed to political parties information on the donor and the payee political party and thus became a breeding ground for harassment and vengeance by the non-receiving political party.

The Congress is alleging that the electoral bonds scheme is doing great damage to Indian delicate and that it should be discussed in both houses of the parliament. They are asking for a full-fledged discussion in electoral financing as electoral bonds are a core component of it. They are also demanding a joint committee to look into these concerns. They also seek intervention of the Supreme Court in this regard.