Mangoti Nande Ka Thara was once known as a village of great beauty. Today it is a badly endangered village. Its people say when it rains they cannot sleep due to the apprehension of a disaster.

How did  this beautiful and peaceful village turn into a zone of landslides and potential big disaster within a short time?

In fact this has been the fate of not just this village but several other villages as well located near to the Parwanoo Solan Highway in Himachal Pradesh. The widening of the highway was very badly planned , fragile hills were so badly disturbed by heavy machinery and so many trees were indiscriminately axed that idyllic villages turned into zones of recurring ugly landslides and potential big disasters. There is a big lesson to be learnt here for other highway projects in the Himalayan region. A spate of such projects have been taken up in recent years.

To return to Mangoti Nande Ka Thara village, this is located in Dharampur block of Solan district. The population of over a hundred people living here had been largely self-sufficient in growing their food requirements, growing wheat, maize and several vegetables. This was supplemented by animal husbandry, shops and daily wage work around the village.

However once the highway widening and the huge tampering with the hills in and around the village disrupted the fragile ecology and geology of the region, big landslides ruined their farms so that agriculture as the base of livelihood and food security is almost gone now. Village paths have been badly damaged so that it is very difficult to fetch fuel, fodder and water to meet their daily needs. It is also increasingly difficult and risky for children to walk to their schools. One house has been so badly damaged that it had to be evacuated. From here the damage is spreading to another house. Two cowsheds have collapsed. Several trees fell down on their own. Two shops were destroyed.

Bhim says—My shop which was the source of my livelihood for 26 years is gone . How do I support my family now.

Apart from huge economic loss and livelihood loss what the villagers fear above all is the possibility of a serious disaster which can badly endanger their life as a big hilly area is sinking.

Now they want that they should be compensated for other heavy losses and their security should be ensured if necessary by resettling them at a new safe place with land. The fact that villagers have been forced to raise such a demand shows the extent to which conditions have become extremely insecure in the village of their ancestors. Till just a short time back they were living here with a secure future and now the very  survival of their village is threatened.

In fact a detailed survey is needed to find out the precise extent of the damage suffered in villages close to the widened highway and the remedial justice and safety based steps that are needed. The government has so far largely ignored this massive damage. It suits the government and the contractors but the government should not forget that the first responsibility of a democratically elected government is towards its people.

People in Dharampur also said that when shops were demolished here for widening of highway, several of the smaller shopkeepers and tenant shopkeepers were so badly harmed that they could not re-establish themselves. Hence special consideration should be given to the needs of small shopkeepers and vendors should also be allowed at selected safe points.

The entire sad experience of this highway widening project should be carefully studied so that the necessary lessons can be drawn from it and such costly social and ecological mistakes can be avoided in future.

Bharat Dogra has written widely on issues of social and ecological concerns. His latest books include Protecting Earth for Children and Planet in Peril. 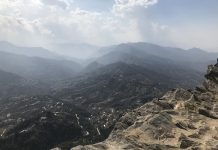