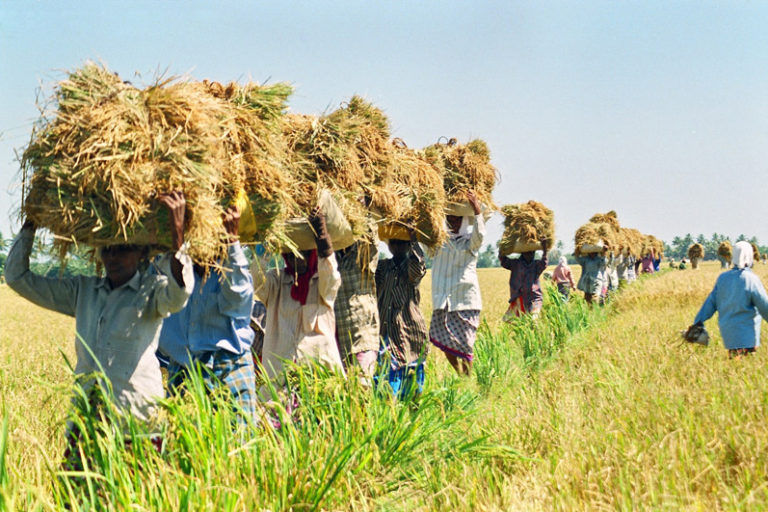 Zero Budget Natural Farming is a fairly self-explanatory term. An alternative to conventional farming, ZBNF claims to have an almost negligible investment in farming by adopting chemical-free agriculture, drawn from traditional methods of farming. Developed in the mid-1990s by Subhash Palekar, a farmer from Maharashtra, the efforts have spread to Karnataka, Andhra Pradesh, Himachal Pradesh, Chhattisgarh and Kerala.

Some farmers seem to have benefitted from the approach. A study in Andhra Pradesh compared the cost of biological and chemical inputs to find that the cost of ZBNF inputs per acre was Rs. 1,706 while that of non-ZBNF inputs turned out to be Rs. 5,361 for paddy crop; ZBNF methods were helping farmers save Rs. 3,655 per acre.

However, when the term regained spotlight during this year’s budget speech by Finance Minister Nirmala Sitharaman in July with her mentioning the need to go “back to basics” with ZBNF, scientists from National Academy of Agricultural Sciences (NAAS) immediately responded by terming it as an “unproven” technology.

With that, replicating the model of ZBNF seems to require a re-assessment. Whether this one-size solution of ZBNF can fit all and rejuvenate the agricultural sector is a big question mark.

Is it really zero budget? The case of AP

The government of Andhra Pradesh (AP) has been among the few state governments that has attempted to scale up the initiative. Their objective was to ensure that every single farmer is able to come out of the present chemical input-based agriculture and practice climate change resilient, low-cost natural farming. To implement ZBNF, they established a para-statal agency, which is an agency wholly or partly owned by the government, by the name of Rythu Sadhikara Samstha (RySS), literally translating to Farmer Empowerment Organisation.

The official website of Andhra Pradesh’s ZBNF states that the agricultural practice aims to reach 691 gram panchayats in the state by 2022, impacting 3.5 million (35 lakh) farmers. By 2027, they plan to scale up enough to cover the entire cultivable area. To manage this task, they estimate a budget of Rs. 164.5 billion (Rs. 16,452 crores), a significant amount, ironically, for a “zero budget” farming practice.

“More than being ironic, it is indicative of the deep-rooted strategy of the Naidu administration [the state government led by Chandrababu Naidu from 2014-19], which viewed farming as a global investment opportunity,” said Leo Saldanha, who works with the Bengaluru-based Environment Support Group. “Here, UN agencies, foreign financial institutions and private foundations worked through RySS in promoting a model in which farmers, local governments and even the legislature have had little or no say.”  In this case, even the agriculture department was sidestepped comprehensively. 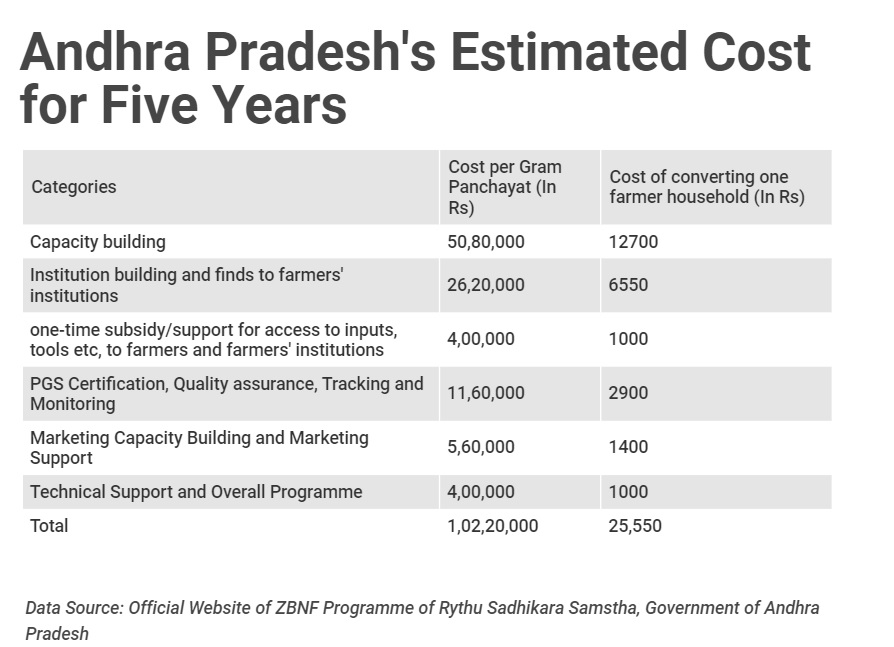 While the funds seem to be to cover the costs of creating an ecosystem to support this type of farming through capacity building, institution building and funds to farmers’ institutions, one-time subsidies, certification, marketing capacity building etc., it misses out a caveat: there is no allocation to be paid directly to a farmer, specifically supporting them with hand-holding during the initial shift.

Concerns on lack of transparency in financials were raised in a letter signed by Leo Saldanha and other signatories including Vandana Shiva from Navdanya, P. Sainath, a well-known journalist and Bittu Sahgal, editor of Sanctuary magazine who wrote to the Deputy Chairman of RySS in September 2018. While in its response, the Deputy Chairman mentions that, “This is required for scaling up the programme across the state…and to provide continuous handholding support of 3 to 5 years to each farmer till they transit to natural farming”, there is no mention of this component in the budget details on the website. Officially, then, this kind of support that is required during the initial slump in production and associated economic loss still does not exist to be addressed.

In a paper authored by Leo Saldanha, he mentions that former Andhra Pradesh CM Chandrababu Naidu spoke at the United Nations headquarters on the theme “Financing Sustainable Agriculture Landscapes-Global Challenges and Opportunities.” In his speech, Naidu said that he travelled to New York in search of collaboration and to seek “finance, philanthropy, market sharing,” so that the ZBNF concept could be taken on “a fast track to a global community.”

However, a highly financialised model like this has political and economic implications that transfer risks that accompany international demands and prices upon farmers.

If the ZBNF model experiences a nation-wide scale-up, it needs to move away from a centralised, didactic and a top-down approach like that of the Green Revolution or Genetically Modified Organisms (GMO)-based farming. These allowed for the capture of food and farming spaces, which should have instead been guided by farmers and consumers.

“The horrific scale and intensity of farm suicides suggest that the prevailing highly financialised and proprietary model of industrial farming is collapsing, and the burden of its failures are borne primarily by farmers,” says Saldanha.

What instead ought to be focussed on is what the Andhra Pradesh ZBNF website claims, but does not seem to practice: “this paradigm relies on self-reliance”. The key aim of ZBNF is to create autonomy of the farmers, which demands a strong role of panchayats, and involving farmers and consumers in decision making.

What’s in a name?

ZBNF, chemical-free farming, organic farming, Jaivik Krishi—these are a few terms which all sides of the same coin.  But regardless, there is an air of exclusivity around ZBNF.  In a paper by Daniel Muenster, where the author physically attended some workshops by Palekar, the author quotes Palekar’s rejection of all alternative farming.

“All these techniques are alternative techniques, but unnatural and non-scientific techniques,” Palekar is quoted saying. According to him, “what is natural, it will not be certified by Agriculture University or Organic University or any third party.”

This exclusivity is dangerous; even when all alternative farming may be standing to promote natural farming and making input costs for farmers lower, the cause would get lost in the war of terms. Not only that, it rejects and ignores groups of farmers practising other agro-ecological methods available. Moreover, there exists data to validate organic or agro-ecology systems, which ZBNF is currently being criticised for not having.

The country’s agrarian crisis is situated in diverse ecological, agro-economic and social conditions. It requires an equally complex and diverse solution. Undoubtedly, promoting ZBNF as a one-size-fits-all solution would not help.

ZBNF is one of the many agro-ecological methods available, and should be adopted where it is appropriate. As people become more aware of the irreversible and adverse impacts of chemical, hybrid and GMO based farming, the government should support opening up spaces in panchayats for farmers to cooperatively transition to any of the many agro-ecological methods that are available, based upon what is appropriate locally.

“By itself, it is should not be promoted as a solution to the diverse agronomic conditions of India,” says Saldanha. “All complex decisions are best taken collaboratively and cooperatively, and deeply democratic decision making is the best methodology we now have for making such choices.”

This story is co-published by Mongabay-India and The Bastion.

This article is republished from  The Mongabay under a Creative Commons license. Read the original article.