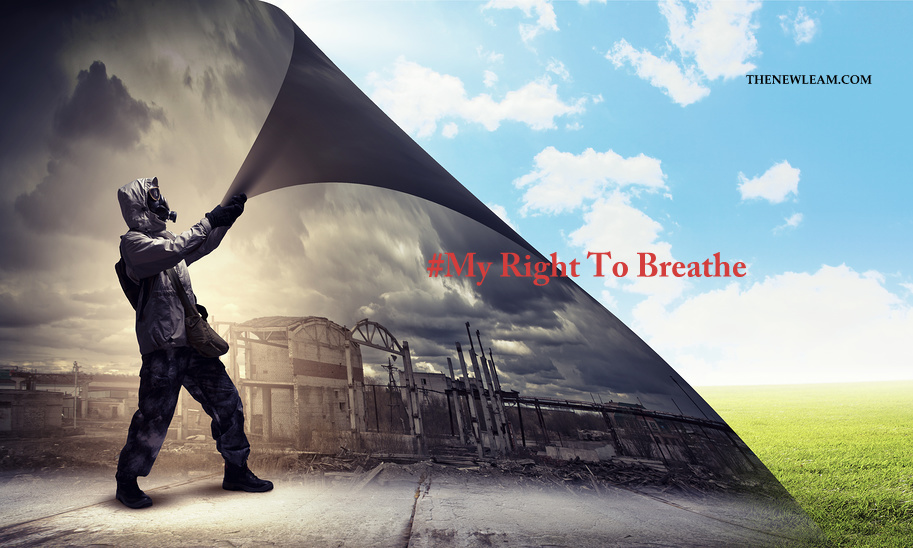 The right to clean air and water even tough not counted among the fundamental rights promised by the constitution to all are among the most crucial assurances that any individual must be guaranteed in order to lead a dignified existence. It is however quite paradoxical to note that although clean air and water are most important for the survival of human beings, the way that our nation-states  deal with the question of environmental sensibility and development show hardly anything in resonance with this ideal.

The mega scale of development that visualizes nature more as an enemy than an aid, the exploitative ritual performed by human mind on the abundance of natural resources, the often unplanned and relentless utilization of limited resources have all collectively contributed to a scenario where the imbalance between growth and environmental sensibility have become the major challenge of our times. From overtly polluted rivers and lakes, declining glaciers and increasing global temperatures we seem to find ourselves amidst an environmental landscape that speaks loudly of the level of degradation caused by the human world.

Can we not live sustainably and utilize the resources that nature offers without a sense of exploitation and instead with a renewed sense of gratitude?

Can human progress be redefined in a manner that it is environmentally and ecologically sustainable?

This need to rethink our relation with nature could be felt even more strongly given the rapidly declining air quality in the country’s capital city New Delhi.

Since the time of Diwali this year there has been a steady decline in the quality of air and the pollution levels have continued to rise time and again way beyond any permissible limits. The thick blanket of smog covering the city for many days did not even allow the sun to shine at its best and led to several reports of lungs and respiratory issues among several other kinds of health alerts. The mutual pointing of fingers was the usual resort among political parties who chose to shout and yell at each other instead of taking any truly meaningful and concrete steps to counter the problem and avoid its occurrence in the future.

We have also been witness to the fact that most people, across party lines, have been nervous about this winter ever since Diwali in 2016, when an unexpected confluence of conditions caused terrifyingly high concentrations of indeterminate gasses leading to perpetual smog that covered the city in a thick blanket.  Almost all news channels made it a point to generate prime time discussions of these themes with spokespersons of various political parties and civil society bodies. However this meant little for the ordinary viewer beyond a noisy affair because it offered little beyond the popular rhetoric. We must acknowledge the fact that no government can drastically alter the pollution scenario especially in a context where at the structural and individual levels we are willing to do little.

Thus it may be impossible to expect conditions to radically change until transformational alternatives are seriously considered. One need not be a cynic or a pessimist to see why this is so. The growing level of air pollution in recent times has displayed a cold arithmetic logic where the numbers have soared high enough in a very short period of time. When we are talking about urban air pollution then what we must first understand what its primary sources are. These can range from- cars and vehicles, domestic cooking or heating, power plants and electricity plants, industries, diesel generator mechanism and open burning of waste materials.

It is alarming to note that in Delhi, over the past few weeks the concentrations of particulates below 2.5 thousandths of a millimetre in size, that remain entrapped deep in the lungs, were 22 times the World Health Organisation (WHO) standard. In November 2016, they were 16 times the standard. Other important cities in the country may appear to be a little better off than Delhi itself but the overall pollution levels are way beyond permissible limits. Polluting gases are largely colorless and odorless and include carbon monoxide, oxides of sulfur and nitrogen, ozone, and volatile organic compounds. What we must also acknowledge is the fact that to keep a check on air pollution one requires well-calibrated and spatially well-represented networks of measurement equipment, which seem to be absent from most parts of India.

It would be duly logical to expect matters to worsen before they can become better. Air pollution largely depends on meteorological factors, but primarily on how much is emitted. This is the number of polluters times the rate of emissions per source.  In other words what this means is that the amount of pollution from each brick kiln, truck or two-wheeler, car, power plant or field can be estimated. Then the total amount of pollution is the sum of all the activities times the pollution per activity. It is no rocket science to realise that the pollution levels will only rise with the growth of economy however the challenge that lies before us is to devise mechanism where emissions per activity can be reduced. This is referred to as the emissions intensity.

Emissions intensity can further be classified into technological and non-technological elements. In cars, for instance, engine technology that utilised less polluting fuels could improve efficiency. Cars now offer the tantalising prospect of reducing emissions intensity to zero, with battery and other energy-storage technologies. But it will take more than three decades for the current set to turn over sufficiently towards zero-emission vehicles, before their contribution to air pollution reduces significantly.

However, this is not sufficient if the total number of cars increases or people drive a lot more. In other word it would not be viable to wait for vehicular technology to improve to curb down the rate of pollution what we need to do instead is to also concentrate on structural transformations along with changes in individual lifestyle. It is crucial that we pay attention to the non-technological aspects such as the importance of urban planning, to reduce driving, and to increase cycling, walking, and use of public transport among many other important steps which will collectively go a long way in reducing pollution levels to a great extent. What this also implies is that we have to alter our lifestyles to meet the growing environmental crisis. We cannot for example go on expanding our needs and expecting that pollution levels will automatically fall down. Instead, we have to opt for collectively viable, environmentally sustainable mechanism that wills collectively benefit us.

This would also include laying a great degree of emphasis on our present ideas of growth, modernity, development or progress.

We have to start reimagining and rethinking our urban space with expanded walking, non-motorised cycling, waterways, and footpaths. In other words, we can rethink the cityscape in a more public oriented and non-individualised mechanism.

There is simultaneously also a need to reduce polluting activities in other sectors such as power generation and industrial production as these have often been the sites of major pollution causing activities. This would mean not only reducing emissions intensity, but also avoiding certain activities or substituting them with others for a more environmentally sustainable future. Any effort in this direction would produce more than one benefit and give us well being in terms of different dimensions such as better health, less carbon emission and an opportunity for different social classes to cooperate for a single cause.

The problem likes in the fact that contemporary policymakers often tend to depend entirely on technology, technologists and technocratic views by economists for finding a solution to the problems faced by nations in the modern times and this leads to an overwhelmingly narrow approach to problems and therefore to their solutions.. They also need to look beyond the corruptive and overwhelming influence of car manufacturers, power producers, developers, and other large stakeholders on decisions on issues as grave and fragile as the environmental crisis of our times. We also need to have a renewed sense of individual vigilantism and some sort of environmental activism in urban spaces where people from different walks of life collectively pledge to make serious lifestyle changes to address the pressing crisis of environmental degradation. Unlike water pollution, where the elite can buy or use filtered water, the rich cannot pay their way out of air pollution. While it is possible that they may not be as exposed or be less likely to face the worst levels suffered by the very poor living on the roads,  air purifiers installed in living spaces offer only temporary reductions in air pollution levels. In fact, recent studies have also begun to reveal that air filters can only lead to a whole set of new disorders for the respiratory system. It is at this juncture that we must understand that we can no longer delay the search for sustainable environmental choices. If we continue to remain unchanged and unaltered the next generation would suffer far beyond what we can conceive of.

It would be thoroughly immature and foolish on our part to look for solutions that are partial or fragmented- we have to look for holistic and grounded solutions and look for ways in which the state and the citizen can engage in a meaningful partnership for social change.  This alone can save us from the environmental doom we are fast approaching.