The book invites the reader to join the journey of ‘quest for the self’ and also for a dialogue with the text. The book unfolds itself in different forms viz. conversation, flashbacks, confessions, and contemplation as well as meditation.

The text oscillates between the first and the third person and bridges the gaps between the objective and the subjective. Its interdisciplinary orientation is likely to seek attention of readers across disciplines such as psychology, politics and cinema to name a few. The glimpses of the author’s life in various cities, notes from his readings, the movies he watched to the thoughts that kept coming to his mind, the role of coincidences are so vivid in the text.

The title and the cover-page of the book are mysterious as well as thought-provoking. The text is divided into four parts – the first part swar contains eight essays on Muktibodh, Srikant Verma, Agyeya, issues of nation and nationalism viz-a-viz novel and women in India, notion of ‘self’ and solitude for women, the second part smriti has two essays on Nirmal Verma and Ramchandra Gandhi; third part samvad has two interviews of Krishna Baldev Vaid and Krishna Sobti and the last part samay is based on diary writing.

A preface by Ashok Vajpayee (noted intellectual and also the head of Raza Foundation) sets the tone and context of the book in the genre of criticism as a tribute to renowned artist Syed Haider Raza. An introduction entitled Pitri-vadh by the author highlights the difference between ‘murder/killing’ (due to envy or hatred) and ‘assassination’ (vadh has a larger social objective behind it) by giving examples of Bhisma Pitamah in Mahabharata to Gandhi in recent times to illustrate how they gave consent or approval for their deaths.

When the author ruthlessly criticizes Agyeya’s Shekhar, he accepts how Nirmal Verma being his Guru and Agyeya as Verma’s srijanatmak (creative) guru makes Agyeya his grandfather. Such confession reminded me of the catholic doctrine of the Trinity mentioned in the introduction of James Joyce’s novel A Portrait of the Artist as a Young Man. He admits that through Nirmal, parts of Agyeya’s creative self must have come to him but despite his willingness to find the same he is unable to relate himself with Agyeya (p. 64).

Bhardwaj calls Nirmal Verma a ‘writer of writers’ not of readers (p. 120) and how writing is not just an act for him but the very essence of life. In their first meeting, the author shared with him that the question ‘who am I’ keeps coming from inside again and again. Verma responded that ‘prior to knowing who we are, it is important to keep questioning oneself again and again since to discover the ‘self’ is a process and its importance lies in the continuity and not the completion’ (p. 118).

The essay on Ramchandra Gandhi reveals how the author had heard of Ramu from Nirmal Verma and Ashok Vajpeyi but did not know who this person was. To him, it was quite a co-incidence that he got to know about his death through the newspaper and attended a programme held at India International Centre (IIC), New Delhi to remember him. Though, the author never met him in person but always felt a strange connection with him through Nirmal Verma.

As mentioned earlier, the critique of Agyeya in general and his character Shekhar in particular is so strong in this text. Let us deliberate upon some of the disagreements. Shekhar is so sure of himself and has no element of doubt in himself and so is Agyeya of Shekhar. How Agyeya gradually tries to turn his hero into a super-hero by saying, ‘Shekhar develops a dangerous habit of thinking’. Bhardwaj counters Agyeya that ‘to think in solitude is a normal human activity and there is nothing so great about it’ (p.55). There is no contradiction in Shekhar and he has been projected as an ‘enlightened being’ but the author admires a character who is a seeker and uses the term ‘sadhna se siddhi’ rather than being ‘aatmmugdh’ (self-obsessed).

The book gives example of two writings – Dostoyveski’s Notes from the Underground and Krishna Baldev Vaid’s Doosra Na Koi where the hero has the ability to laugh upon himself and ready for self-criticism. At different places, author has mentioned about Vaid’s criticism of Agyeya and I feel that he is quite influenced by the same. In words of Muktibodh, one may ask, ‘Partner, tumhari politics kya hai’? (what is your politics?). I read the novel Shekhar: Eke Jeevani a decade back and was quite impressed by the same but it seems I will soon re-visit/ again read that novel.

Women and novel as a major theme of this book compares the context of novel as a genre being product of modernity in Europe and India. The very act of reading novel (a solitary activity) changed the image and fate of Indian women since prior to arrival of novels, reading for women was a congregational activity comprising of reading Ramayana or Satyanarayana Katha. The novelists such as Sharatchandra and Rabindranath Tagore dealt with women/female at two levels – as a protagonist as well as a reader. What is the idea of liberation/freedom and solitude for women and how do they look at men and society is explored through novels of U.R. Ananthamurthy, Nirmal Verma, K B Vaid to name a few. From women as merely a catalyst to push men for self-reflection to women exploring their ‘self’ is well reflected.

The interview with K B Vaid is quite long and Krihna Sobti’s interview is short but quite a powerful one as her last academic conversation. Vaid’s interview covers the wide range of his novels viz. Nar Nari, Mayalok, Ek Naukrani ki Diary and how he evolved as a writer and the differences between him and Nirmal Verma grew over the years. Vaid started working on Henry James and challenged his position ‘first person is condemned to the fluidity of self-revelation’ (p. 141). Vaid shares his three techniques of writing namely – monologue, stream of consciousness and first person narrative (p. 140). Sobti unravels the complexities of writing, the need to overcome the binary of male and female in literature and her strong belief in the Indian tradition of ardhnarishwar (a unit of oneness comprising male and female both).

Author being a columnist with The Indian Express with a wide range of interests from music to world literature and cinema is quite evident in the last section of the text on diary. Diary acts as a mirror and he got to learn so much from the diaries of K B Vaid. He compares the various styles of diary writing through authors such as Anais Nin, Kafka, Virginia Woolf and even feels tempted to write a separate book on diaries of various authors (p. 240). Along with diaries of authors and he shares some of his own entries as diary writing over the last decade.

The controversies in Ramcharitmanas to Adorno’s ‘late style’ help us in understanding the themes such as ‘individuation’, ‘alienation’, ‘life’, ‘death’, ‘belongingness’ and many more.   In this age of instant when we are often in hurry and are rushing for something, this book compels us for a pause, to go slow, to think and to reflect. Towards the last, the author confesses his growing differences with Nirmal Verma’s writings and I felt ‘othering’ is so important for him. However, for those who love literature, this book will be a prized possession, for not only what it offers but also what it invites you for. 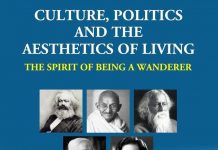 Womanhood and Questions of Femininity in Munshi Premchand’s Manovrati