I remember how everybody felt excited in my locality about a television serial called Ramayana. I was a child then – trying to make meaning of my surrounding. Everywhere I went I found people following each and every episode of the program religiously. And it was exactly the time when I came to know that Lord Rama has a space and place in our country which has been used for politics and entertainment time and again precisely by the virtue of the fact that he is a revered figure in our cultural milieu. And not only had the mainstream Hindus of our nation, but the citizens from other faiths too appreciated this program for its direction, music, acting, and so on. Obviously, the decision of the State to telecast the television serial again brought back the memories of my childhood and made me become nostalgic.

But I am not the same man anymore. Time has changed me, and my way of reading a cinematic drama. Hence, as a corollary, the decision of our State to telecast a program in a time of an unprecedented crisis makes me rethink about the values transmitted by this serial and whether these values can be useful for the State to create a docile and hypnotized ‘generation’. Well, before moving further, let me inform you that the term generation here has nothing to do with kinship; rather it represents the entire cohort of population witnessing the present moment – as explained by the father of the Sociology of Knowledge, Karl Mannheim.

We all know that every regime has its own preferences, its ‘likes’ and ‘dislikes’, which influences the discourse of knowledge production. We also understand the fact that knowledge is not something that can only be realized inside an institution dedicated to making socially adaptive individuals. Knowledge is also, in my opinion, something that we learn by sensing the everyday life. And therefore, at times, my conscience makes me investigate the trajectory taken by the contemporary dominant forces to valorize certain sentiments over others. Ramayana, for instance, as presented by a remarkable director Mr.Ramanand Sagar, provides me with the commentary on the development of the duality of sacred and profane in our public sphere. However, to my knowledge, the version of Ramayana portrayed by Mr.Ramananda is not the only Ramayana known to our country. He probably made his Ramayana the Ramayana of the Popular Culture which is often taken into consideration, and used as a frame of reference, by the State in, say, while deciding the curriculum of the primary classes, or to make embarrassing arguments in the Science Conferences, or to formulate policies that disappoints us badly in the long run. And some might say that there is nothing wrong in this because Myths have often proved to be helpful in creating Meanings for various cultures. They help us develop an orientation towards our life and to cultivate certain ethos that shapes our desirability and undesirability. This, now, takes us towards three significant dimensions which are seeking our immediate attention:

First, it appears that Lord Rama never allowed any group to have a monopoly over him. The first known Ramayana was authored by Valmiki, and then was followed by saint Tulasi. Strangely, both the narratives of Ramayana have two different portrayals of Rama. Valmiki was perhaps a realist. He considered Rama an ordinary man who possessed all the traits of a simple human being. Tulasi – being an idealist, on the contrary, used his poetic license to canonize him with his flowery language that contained a wide range of allegories and metaphors. Moreover, there are, at present, more than 300 known versions of Ramayana – some of which have even demonized Rama for many reasons. The characters of Ramayana have also been used by various cultures both inside and outside the territory of India. Sikhism, for example, considers Rama as inner soul, Sita as Buddhi (intellect), Lakshman as Mann (heart), while Ravana as Ego. This epic has been expressed or interpreted in Lkhaon Khmer dance theatre, in the Mappila Songs of the Muslims of Kerala and Lakshadweep, in the Indian operatic tradition of Yakshagana, and in the epic paintings still extant on, for instance, the walls of Thailand’s Wat Phra Kaew palace temple. In Indonesia, the tales of the Ramayana appear reflected in ballet performances, masked danced drama, and Wayang shadow puppetry. Therefore, there is no point in considering the television version of Ramayana as the ‘only’ Ramayana which exists. In fact, this Ramayana should be considered as a path towards all other Ramayanas – thus, enhancing the richness of a tremendously celebrated text.

Second, the 28th President of the United States, and the father of Public Administration – Mr.Woodrow Wilson, always insisted that an organic administration should always remain open to new ideas, but must never forget to consider the compatibility of an idea while formulating policy. If we go with this argument, then, we realize that it becomes extremely difficult to understand – when a curriculum based upon a scriptural text, intending to promote our culture, proves to be, in reality, detrimental to our scientific temperament.

Third, when the first two authors of Ramayana were busy writing, the world didn’t know about the values of Liberty, Equality and Fraternity. Hence, watching of Ramayana today must not numb the critical faculties of a vibrant civil society. It is important now, therefore, to understand the intention of the State behind telecasting a program.

Ramayana, in my view, will soon turn out to be paraphernalia if the Centre fails to resolve the troubles of the migrant labourers which emerged out of the foolhardy decisions taken by the government.

For some Ramayana might be a superstition, for others opium. And likewise, some may consider it to be a symbolic representation of the artefacts; and, others may call it a Brahmanical text. Nevertheless, I believe that the rendition of Ramayana is a juncture of loyalty, defiance, devotion, revenge and justice. And therefore, it is open to subjective interpretations.  I suppose that we can celebrate this profound television serial like never before if we make an attempt to understand this simple thing. 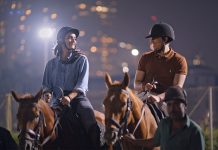