India is known throughout the world for its exemplary talent from the grassroots and that is why the folk tradition of painting has been excelling in India and has had an important role to play in shaping its public imagery through the decades. As the world is battling the coronavirus pandemic and India is no exception to it, prominent folk artists from the country have gone ahead and created some of the most magnificent and critical pieces of art that resonate with our times.

These folk artists have come together to create pieces of art that don’t only comprise of a treat for the eyes or for our visual sensibilities but also send an important message to the world grappling with the changed social and political reality as we face the pandemic.

A group of folk artists decided to produce a series of paintings and traditional presentations of art during the period of the lockdown to generate awareness about the importance of hygiene and social distancing in fighting against the pandemic. They devoted extended periods of time to the cause and the group of folk artists and craftspeople across India produced various illustrations and paintings in traditional styles. It is interesting to note that these folk artists decided not to bow down to the economic hardships brought about by the economic lockdown due to the pandemic instead they took it as an opportunity to speak through their art and save their art in its garb.

The artists started their work from March. The artists who produced these nuanced and intricate pieces of work are associated with one of India’s most prominent society for crafts and craftspeople called Dastkar.

Through the series of paintings and art works these artists have tried to generate awareness about the critical important of social distancing, maintaining personal and environmental hygiene and practicing social distancing.

All these pieces of art have followed the folk and traditional styles of painting which have been prevalent in India for centuries. It is important to note here that in India, traditionally many folk art forms were created on large scrolls or as murals to share information with the larger community. It was a common practice for artists to hold up scrolls in village squares and share messages of awareness with the larger village community though their art forms.

Many traditional art forms have been used in these series of paintings that comprises of folk artists from different states such as Bihar, Rajasthan, Uttar Pradesh etc and uses Madhubani and miniature painting techniques from Rajasthan among a host of other styles.

While the series of paintings has very interesting messages that resonate with the needs of the contemporary times, there are some like artist Tulsidas Nimbark’s painting who has used the 17th century Rajasthani miniature tradition to depict the Hindu deity Lord Krishna dancing in a garden with a saint who is adorning a face mask and has a bottle of hand-washing liquid placed right next to him. Moreover, another folk artist from Bihar, Ambika Devi has used the Madhubani painting style and has shown how the coronavirus pandemic has affected rural village life in the region.

It would then not be wrong to say that these folks artists have indeed shown their creativity and sharp observation of the changed world in the phase of the pandemic and reminded us that art is and has always been an important social commentator. 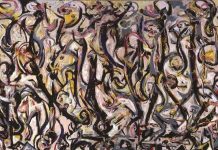