During this period of crisis due to the outbreak of Covid- 19, just like everyone else, I am confined to my home with my family, but this has enabled me to become more aware of the things that are going on around me.

Thanks to what is known as the fourth pillar of democracy i.e. the media (broadcast, print as well as social) that helps in providing us with news, whether real or distorted, actual or exaggerated.

With this gloomy scenario in the background, let’s redefine the world. The world which is constantly living in risk, uncertainty and fear of death. Death is considered as a taboo in most of the societies whether Indian, American or any other which makes it not only difficult but also challenging for individuals to sustain and live peacefully during such turmoil and upheaval.

As Margaret Mead highlights in ‘Coming of Age in Samoa’ that the Samoan child is not only handled more gently by its culture but is also better equipped and familiarized with sex, birth and death at an early age, without disaster, without nervous disability.

But children in the present times are confined within one nuclear family and owe their experience with death of a parent or grandparent which seems disastrous to them as first experience and that also of the closest one. Even their knowledge of sex, aside from children’s gossip, come from an accidental glimpse of parental activity. Parents try to envelope the child in a protective atmosphere free from shock. But the child, as soon as he/she leaves the protecting circle of the home starts regarding such experience as ugly and unnatural.

Hopefully when the things will get normal in future, those students who are not able to cope and grasp the academic teachings speedily will be over-burdened and left behind. But this is not the case of the Samoan child. In Samoa, dullard is not goaded and dragged along faster than he is able until. Their educational policy also tends to blur individual differences to minimize jealousy, rivalry, emulation.

Thus I can conclude that we are neither prepared ethically, nor physically to fight such times of great pandemic.

Covid- 19 statistics from various countries helps us understand the gender discrimination present in different societies. Data of developed countries and advanced economies says, nearly 50% of those infected are women including South Korea, Australia, China, Italy, Japan which reflects gender equality in their societies.

In developing countries like India and Pakistan, majority of those infected are men. In case of India, men account for76% of the infections, while in Pakistan, men account for 72% of the infections. This is clearly the reflection of employment trends in developing countries. It reveals that far less women are employed than men and limited mobility options are available to them in a patriarchal society because less you travel, more you are unemployed- chances of catching infection will be low.

Moreover, there are increasing cases of domestic violence in India since March 24 lockdown with husbands venting their frustration on wives, who have no escape from their nearest abusers. According to National Commission on Women (NCW)- many of the women who suffer domestic abuse don’t know how to send emails.

The most haunting aspect that differentiates and divides women of our traditional India is the fear to reveal out their domestic issues of aggressiveness and violence that can cause great damage to their middle and higher class reputation. Educating and helping such women during this period of crisis can comprise a new pedagogy for the most needy section of our society.

One can’t even imagine the passive effects of such violence on the lives of women who are always taught to tolerate such frustrating attitude of their husbands. Women celebrate the premature or untimely death of their husband because it becomes the marker of their freedom from the slavery and bondage of their dominating husband.

To redefine the notion of gender equality and to set the new parameters and standards of a successful marriage is just like redefining the world for me.

Such a chronic crisis teaches us a very significant lesson about environment which is constantly recovering and healing itself due to the standstill of human life and industrial production- Nature knows very well how to balance itself either through peace or through disaster. Humans have left no option in front of nature other than causing epidemic. It has turned modernist zeal of human supremacy, expansion and control upside down.

The culture of surveillance and observation as highlighted by Michel Foucault is reaching its new heights which has submerged entire society including hospitals, schools, markets and what not. Methods of giving punishment solely and authoritatively seems to lie in the hands of policemen that ranges from light physical punishment to petty humiliations. The question whether going out of home comprises offence is highly debatable and it seems very difficult to arrive at any concrete conclusion.

Politics in the name of religion that is being played even during such times of contagious pandemic capable of engulfing the entire world reveals not only the ultimate aim of the politicians (including bribed media) to adopt divide and rule policy of the Britishers but also the mistake committed by a religious group that can prove fatal for the entire nation.

Now the human has become the victim of consumerism (machines, products, commodities which were created by himself for his own use). I really do not get fascinated by people who take selfies while distributing few essentials to the needy or by those who take screenshots while donating to PMCARES and post them instantly on social media. I feel pity for them and for their mentality who consider themselves as being superior to others, as being giver (dani), because a true giver never believes in showing off or revealing to everyone what all he or she has donated.

When the dates of lockdown are continuously getting extended, one question definitely comes to the mind of every student and teacher- how to cope up with the loss incurred by academic suspension?

But most of these minds tend to forget that life itself is an accumulated process of learning. Each and every moment teaches us a new chapter only if we desire to learn something from it. Moreover, each and every individual in itself is a teacher, so at our best we can try to learn from our surroundings, from the people who are around us and can also teach them whatever we know or feel like. I think this is the practical fieldwork for every student in such times of crisis.

When it comes to getting classes conducted online through Zoom app, Facebook or something else, I admit that there are some genuine students who do not have access to internet and online resources or those who face connectivity issues. But playing politics in the name of deprivation, insisting adamantly for getting online classes cancelled is highly critical.

What one need to learn from this crisis is the role and importance of Public Sector Undertakings (PSUs) in dealing with public health. We all are well aware that public authorities and health care systems are almost everywhere caught short-handed, starving due to the lack of funds. Credit goes to increasing privatization and disinvestment since 19th century. Private companies if succeed in making an antidote of Covid- 19 will obviously sell it in order to make huge profits (already revealed by excessive demand of hand- sanitizers and increasing prices of such essential items). This requires socializing the economy and adopting welfare oriented approach without directly calling it as Socialism.

It is a myth that infectious diseases do not acknowledge religion, class, gender or any other social barrier. The question is about who can afford to work at or from(office- goers) and who cannot (manual laborers, farmers), who can afford to quarantine themselves (with or without pay), this clearly highlights the notion of class inequality. Progress of Covid- 19 exhibits all the characteristics of gendered and class pandemic.

But in spite of that we all need to give our contributions whether big or small in order to end or minimize such inequality and that comprises our new pedagogy, our new method and practice of teaching each other.

Ayush Kushwaha is pursuing his Masters in Sociology from J.N.U./New Delhi. 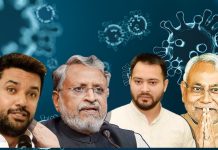 Bihar Hasn’t Defeated the COVID-19 Pandemic, It Has Hidden it for the Sake of Electoral Politics 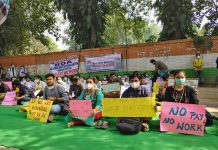 Bihar Hasn’t Defeated the COVID-19 Pandemic, It Has Hidden it for...