China has gone ahead and approved the controversial security law which is making it a hot topic of discussion in media forums across the world.

The new security law is set to criminalise secession, subversion and collusion with foreign forces and back home, it will act as a formalised way to curtail all kinds of public protests and resistance.

The new and controversial security law is also seen as a danger to the freedom of speech in China. The move has been followed by growing unrest and a pro-democracy movement that is gaining new strength after China announced its decision to pass the controversial law.

The pro-democracy organisation Demosisto reacted to the news by announcing that it had made a decision to cease out all operations.

It was sometime ago that one of China’s most well-known human rights activists Joshua Wong who had been one of the key figures in the Hong Kong protests had said that he was leaving the group, which he was one of the core members of. Some other important human rights and social activists in China and Hong Kong have plans of organising and joining a key march that would be held on Wednesday, despite the risk of being arrested under the new law.

The news of the Chinese President Xi Jinping having formally singed the security law was confirmed by the China’s official news agency Xinhua. It has been added to Hong Kong’s Basic Law, the 50-year mini-constitution agreed when the territory’s sovereignty had been returned to China by the United Kingdom in 1997.

The terms of the law have not been cleared for the general public yet and there is a great deal of confusion about how citizens are required to abide by the new law.

The law is likely to be implemented from as early as Wednesday. The UK Foreign Secretary Dominic Raab expressed “deep concern” at the reports of the law being passed. He said that the would be a grave step for China. Ever since the law was announced and signed by the president, Hong Kong has been seeing massive public protests and China in general has been seeing public discontent since the plans of its adoption came to the forefront in May this year. China’s government argues that this is a necessary law and would help it control resistance and instability within the country and says that it doesn’t require other countries to interfere in its internal matters.

The law was passed unanimously in a session of the Standing Committee of the National People’s Congress in Beijing. The passage 0f the law comes a day before the 23 rd anniversary of the handover from Britain to China, which is celebrated with many pro-democracy festivals.

It is believed that the law will take away people’s freedom and curb pro-pro-democracy protests. In recent years, Hong Kong has seen waves of protests wherein people have demanded more rights. Last year too, there were many rallies and violent protests demanding democracy. 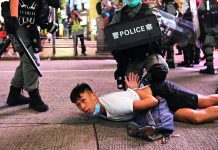 He Built a Privately Funded Border Wall. It’s Already at Risk of Falling Down if Not Fixed.

Moorings for a Post-Pandemic World & On What Lies Beyond

Does your face mask protect you or other people?