Recently I watched a Web series on Amazon Prime named Patal Lok, directed by Avinash Arun Dhaware & Prosit Roy and produced under Anushka Sharma’s banner, Clean Slate Films. The reason of watching it was that I had heard & read good reviews about it from friends and cinema personalities. Some compared it to Anurag Kashyap & Vikramaditya Motwane directed Sacred Games which was based on Vikram Chandra’s novel of the same name. Some appreciated its theme and its socio-political depth. So I went ahead and watched it.

While watching Paatal Lok, I found its flavour similar to that of Sacred Games but it’s very different in content & it’s really a good and appreciable web series.

Inspector Hathiram Chaudhary is the lead and has been played by Jaideep Ahlawat who has always come up with fascinating performances. His talent was already visible in commando, Gangs of Wasseypur, Raazi etc. but here the whole show is on his charm. So, Hathiram is an ordinary inspector who feels that his life will just revolve in the outer Jamuna paar region which he calls Paatal Lok, where insects live. He is himself a good, honest cop who is with a noble young junior policeman Imran Ansari, a Kashmiri Muslim played by actor Ishwak Singh. One day he gets a case where four people were captured by top police officers in a chase and Hathiram was told by officers that all four had involved in a plan to assassinate a media personality Sanjeev Mehra (Neeraj Kabi). But When Hathiram and Ansari started investigating the case, they faced dark realities of the system and cruel realities of those who are on powerful positions and enjoy public fame and name.

Here characters are intelligently written where we can see a Muslim guy, a person from the LGBT community, a lower caste guy from Punjab and a brutal killer who chose the criminal path because of his sisters’ revenge. All these characters got arrested in the beginning (first episode). The very first impression about them is that they are criminals. But these characters are much deeply written, and their past stories question whole society for their situations.

Along with these four arrested convicts, other characters are also interesting. We find an ignored wife, an honest journalist whose illusions about her role model shattered and her struggle to speak the truth among many others. By such various types of diverse backgrounded, multicultural characters this series touches lots of social issues including oppressions of upper castes on lower castes, hate crime & prejudices against Muslims, the situation of the Transgender community in jail, child abuse, power greed in media and a major link of politics, goons, upper level officers etc.

In this high ended political investigatory drama we find the above mentioned multiple characters who are sometimes themselves oppressors and sometimes shown as oppressed. Here caste oppression of Punjab has been shown which we generally ignore and classist, feudal oppression of women by powerful people in rural India is visible through Chitrakut’s story of Vishal “Hathoda” Tyagi (Abhishek Banerji). So, going into the history of all four arrested characters, it came out that every crime has a history and all characters mainly somewhere suffered as oppressed guys. But the beauty of the script is that it not just works on generating sympathy for them or shows them pity but in some scenes those characters show their power on others and behave as oppressors. For example, the lower caste guy was oppressed by upper caste boys in his village, but he laughed on transgender character in police custody and abuses his girlfriend as an obsessed lover.

Overall it tells the same old story of grand conspiracies, political corruption, greed for power, corrupt police and  a malfunction bureaucratic system. But the way story goes is interesting and the effort of the team is visible in the script, scenes, dialogues &  cinematography. Each moment it gives a good spy-story flavor. The links of the story go from Delhi to Punjab to Chitrakut. Twists of the investigation are quite good, and we can’t predict things easily. Of course from initial episodes it was visible that there was something fishy in the story.But the exact things are not easily predictable. So, the credit of such intelligent moves in the story goes to both script writers Sudip Sharma & Sagar Haveli. Characters’ pasts were presented nicely, especially the story of the lower caste Punjabi guy, a transgender’s child abuse issue, a Muslim who runs from his identity & a person who became a bad guy because of revenge.

A Creative Portrayal of Themes

Great work has been done on the characters, their language, tones and the depiction of different scenes is quite natural. Even in terms of cussing & abuses, the difference & impact of places is visible. Music by Naren Chandavarkar & Benedict Taylor leaves an impact. The cinematography looks inspired from western dark cinema with an Indian twist. As I mentioned, the shadow of Sacred Games goes with the series. We will find Pauranic, ancient text references such as Hiranyakashyap’s story, Pandava and dog’s story. But that slightly just touches the plot and does not look prominent as it was in Sacred Games. Here it looks as if the writers just wanted to put it for making the story more interesting and attractive.

In Sacred Games, Pauaranik parts were used more dominantly & intelligently. But on political dark reality Pataal Lok hits hard which was slightly touched by Sacred Games in its Sci-Fi & politico-social grand narrative. Like Sacred Games, Patal lok also gives historical information of most of the characters such as all the arrested four and of the lead Hathiram Chaudhary. One important thing is that its story deals with media sector too, which was almost ignored in Sacred Games. Where Sacred Games was based more on a big project of destroying the world and by the fact that it looked at socio-political issues such as communal hatred, corruption in police and political class, dark realities of TV and film industry, mob lynching, fake encounter, etc., this series is mainly focused on real incidents of political corruption, power greed related games and overall ill functioning of the system.

As many such scripts need some strong honest police characters so here also, we have Hathiram Chaudhary and his junior Imran Ansari. With the character of a young Kashmiri boy Imran, script also deals with the communal prejudices and comments in police department. Where Hathiram Chaudhary is better than others but also not free from his own biases like a real-life character. That’s clearly shown in a scene when He made a communal remark on suspected Muslim convict and then looking presence of Imran, he realized his mistake. There are many such small incidents where we can find various important issues. Such as in some scenes the transgender convict faces serious problems in Jail which realizes us realities of jails for transgenders.

The series is thoroughly written by Sudip Sharma and Sagar Haveli & brilliantly directed by Avinash Arun & Prosit Roy. Navdeep Singh is the script consultant, who has directed NH-10 and earlier was famous for the  film Manorama Six Feet Under, which was based on a Hollywood film China Town. Navdeep’s style looks inspired from western dark films. so, we can also find Taaseer of his Manorama six feet under here. Where not always big fishes catch small fishes, but sometimes small fishes save themselves.

Paatal Lok is surely a result of serious dedication of script writers, directors, actors and music directors along with the whole team. Scene by scene their efforts are visible. Actors worked well to justify their characters such as Neeraj Kabi, Ishwak Singh, Swastika Mukherji, Gul Panag and others. But yes, the whole story travels on the shoulders of Jaideep Ahlawat who has exhibited his real talent as a deep actor. Jaideep has always given his hard efforts in other films too but perhaps this series will work for him like what Haasil had done for Irrfan Khan. Another actor who showed his versatility is Abhishek Banerji who played role of a serious, cruel killer, Vishal “Hathoda” Tyagi, who is here very different from his other comic roles in Bala, Stree among other films. 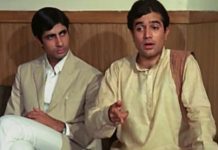