The kind of violence that broke out in Bengaluru on Tuesday night was one whose extremity and intensity cannot really be compared to any other in the recent past. The effect of the violence was felt more intensely because it occurred in a densely populated part of the city and in a pocket that is quite congested and closely knit.

The violence had spread to the localities of Kavalbyrasandra, KG Halli and DJ Halli. The conflict that ultimately escalated into a full-fledged violent incident that shook the city of Bengaluru began at around 7pm outside the house of Congress MLA Akhanda Srinivasmurthy and went on into the wee hours of the morning.

Gradually the situation began to worsen and large mobs gathered and torched vehicles outside the KG Halli and DJ Halli police stations. There was massive stone pelting and sharp objects were hurled at police personnel who had arrived at the scene to bring matters under control. There were several rounds of firing in the air and there was usage of tear gas shells by the police to control the angry mob.

But the root cause of the entire drama that unfolded that day was the posting of derogatory remarks against the Prophet and offensive comments on Islam and its believers on Facebook by a family member of Congress MLA Akhanda Srinivas Murthy.

Large mobs began to gather outside the rsidnece of the MLA and began demanding immediate action against the person/people who had been involved in posting offensive comments against Islam and its beliefs but the situation soon went out of control and riots broke out in the neighbouring areas. But despite the fact that the violence that broke out and the resultant loss of life and property was what captured most of the media attention, there is a positive side to the story that ought to be celebrated and valued. Because it is this positive side to the entire episode that reinstalls our faith in our collective possibilities and reminds us of the need to step out of mobs, and discover our inner voice.

While rioters and arsonists ran across the city in tremendous rage and anger, willing to set ablaze and ruin anything that came in their ways, a group of nearly 100 young muslin men coming from the areas such as DJ Halli(an area that had been the most affected by the riots) formed a long human-chain just outside a temple, to block rioters from damaging it. The temple that the group of young muslim men were protecting and safeguarding from the rioters is located near the Shampura main road in Bengaluru. The group stood holding hands and forming the human-chain from 11.30 pm to 1 am.The human chain built and sustained by Muslim youth from a neighbourhood that was one among the worst hit by the riots, reminds us of the tremendous potential that human agency has and the way sensitivity, maturity and a willingness to transform an apparently hostile and conflict-ridden situation into a chance for exercising one’s own critical consciousness and creativity are remarkable. The efforts made by these young people is praiseworthy and a reminder that violence only escalates violence, peace breaks the cycle

of violence and offers fresh alternatives to address pressing challenges. 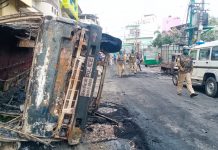 Citizens Protest at India Gate Against Communal Riots in Capital

Who is Responsible for the Unfortunate and Alarming Violence in Delhi?