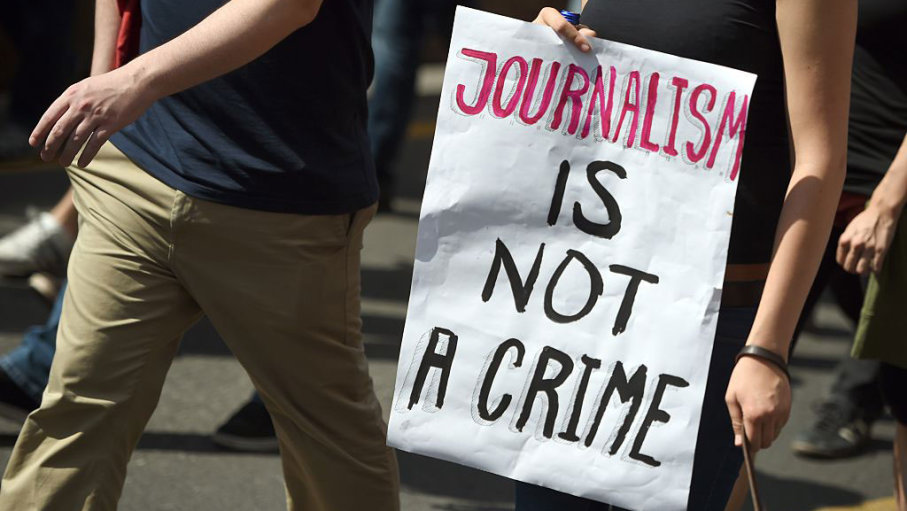 In this piece, we map out the extent to which the fourth estate(media or press)has been able to retain its independence in the country and whether it is successfully protecting and upholding the ethos of democracy, secularism, and independence.

The year began amid outraging protests against the Citizenship Amendment Act(CAA) all across the country and the news of violence from the epicentre of these protests, Shaheen Bagh and Jamia Millia Islamia University in New Delhi

Soon, violence followed at another university of national and international repute, Jawaharlal Nehru University in Delhi.

Many students had panicked not because they lacked the courage to witness what was transpiring in their beloved institutions but because the reoccurring violent incidents had sent shockwaves across the country, making parents worry about their children. A woman, the president of the student’s union at Jawaharlal Nehru University, was hit with iron rods in the campus premises itself, and the videos were circulated across news channels.

While students of these two central universities were trying to contemplate the eruption of violence within their campuses, so much so even within the hostel rooms, something unthoughtful had conspired in the northeast Delhi.

The end of the February witnessed riots in the majority of northeast Delhi localities in which about 53 lives were lost, and hundreds of people suffered injuries caused by gunshots, iron rods, wooden sticks and other sharp objects. Many were left homeless as their houses were burnt and looted.

In the simmering hopes of normalising the livelihoods, broke out the pandemic, and it was followed by subsequent lockdowns. The economic activities and employment opportunities were drastically hit due to the pandemic.

In this context, if we are to examine the role of media during the riots in northeast Delhi, we can say it was both exemplary as well as instigative. Some journalists showed immense courage to cover and bring out the ground-based narratives of victims, and witnesses, in an attempt to unfold the chronology of events that led to the unprecedented violence. Despite the fact, that from day one, most of the reporters present at the site shared gruesome stories of intimidation and attacks. In these incidents, a journalist was shot, and the mob assaulted four reporters, including camerapersons. Many of the journalists had shared their experiences on the social media platform. The Editors Guild of India issued a press statement in which it condemned the attack on journalists and urged Delhi police to take necessary steps to provide protection and prevent any such attacks in future.

About five journalists were attacked by rioters and police in the Bangalore riots just a couple of weeks ago. Around the same time, three staff members including a female employee  of The Caravan were targeted and attacked by the mob in northeast Delhi.

The pandemic posed new challenges to the fourth pillar of democracy(the media/press)with the government’s imposition of restrictions on the freedom of the press.

As per a report titled, “India: Media’s Crackdown During Covid-19 Lockdown”, around 55 journalists were targeted between 25 March and 31 May for merely reporting on issues related to the novel coronavirus and the state’s response mechanisms. The highest cases were reported from Uttar Pradesh (11), followed by Jammu and Kashmir (6), Himachal Pradesh (5). Four each in Tamil Nadu, West Bengal, Odisha, Maharashtra. Two each in Punjab, Delhi, Madhya Pradesh and Kerala. One each in Andaman & Nicobar Islands, Arunachal Pradesh, Assam, Bihar, Chhattisgarh, Gujarat, Karnataka, Nagaland and Telangana.

Silencing of prominent voices has been there for some time now, Gauri Lankesh was after all shot post her allegedly offensive posts on social media. But risks in the present times are more prominent, especially for the reporters bringing out stories criticising the government’s role.In these processes of dialectics and dialogues, between ‘good’ and ‘bad’ journalism, the democratic ethos is comprised. A comparative analysis of Tablighi Jamaat congregation and Ram Janam Bhumi Poojan, the latter also attended by the prime minister himself, speaks volumes about the nature of ‘free’ press and its scale of unbiased reporting. And it is to be noted here, that the priest who shared the stage with the most important man of the nation tested positive two days after the ceremony.

For any scientific understanding, we are either yet to explore how the virus may effect people of various religions, differently. The media coverage in the former case had established these men as “super-spreaders” while in the latter case, the news coverage was only about India’s, rather Ayodhya’s “vikas”. The Hindu for instance headlined, “Modern symbol of Indian culture: Modi”, or Times of India, headlined, “PM lays foundation stone for Ram temple, likens Ayodhya campaign to freedom fight”.

With the unprecedented use of new media, also called the fifth estate, especially during times like these, when many print editions are temporarily suspended, there is a new information space, which lacks transparency and authenticity. For instance, a senior journalist like Rajdeep Sardesai had to issue an apology on Twitter for falling off to the news of the demise of the Pranab Mukherjee.

The falling rank of Indian press in the World Freedom Index expresses severe concerns over its independent nature. The investigative reporters are facing the brunt. The online trolls and abuse over the new media platforms, poses another series of concerns and challenges, especially for women reporters.

On India’s 74th Independence Day, #StopMediaLockdown trended on Twitter with various journalists, independent reporters, freelancers and netizens coming together to condemn the attacks on media. How independent is the fourth estate in our times is a question that we as citizens must continue to ask if we are to sustain a truly democratic and free society.