India has been witnessing a major loss of livelihoods opportunities amid the coronavirus pandemic and as lakhs of people look forward to new opportunities being generated by the government, India is considered to extend the scope of its employment guarantee scheme. Lack of employment is a major challenge that India has been facing for the longest time and this problem has only been aggravated by the fact that the pandemic took a complete toll on most sectors of the economy and most drastically affected workers in the informal and unorganised sectors.

The government now has plans of extending its employment schemes to the smaller cities and towns of the country running with an estimate cost of about Rs 350 billion.

The PM Modi led government has been spending over 1 trillion for regenerating and sustaining jobs and employment opportunities in rural parts of India and now workers in the hinterland may earn a guaranteed minimum daily wage of Rs 202 at least for 100 days if not more.

India is experiencing one of the greatest ever economic contractions in the history of the country and this plan may aide the easing of the crisis especially in the urban and semi-urban areas of the nation.

The idea of the government is to start with smaller towns which require less specialised manpower. The plan that is now functional at the rural level generates employment for people in local public workers such as road building, well digging, reforestation among a host of other services. This scheme has been able to cover more than 270 million people successfully and has come to the aid of migrant workers who were compelled to return from the urban spaces amid the coronavirus lockdown.

But the impact of the coronavirus induced lockdown was not limited in the cities but affected even the smaller tows and semi-urban regions of the country.

More than 121 million people had been rendered jobless in April in India and this has now taken our unemployment rate to 23% according to the data produced by the Centre for Monitoring Indian Economy Pvt. The rate of joblessness may have declined once the Indian economy gradually began to open up, but there is still a very long way to go before things become normal.

It is believed that this new program will help to boost the Indian economy and help not only those in villages but also people in semi-urban regions along with small towns of India. 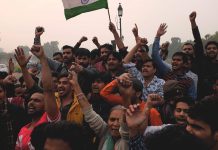 A Jobless Economic Growth and a Worsening Countrywide Trend