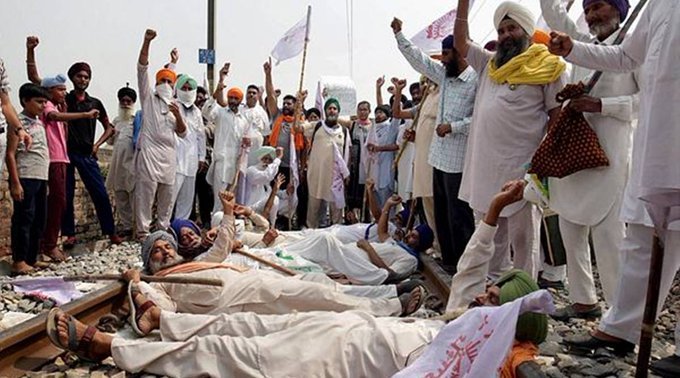 Farmers in many parts of the country have been protesting and agitating against the recently passed Farmers’ Bills. The protests have been particularly powerful in states such as Punjab and Haryana but they are gradually beginning to gain momentum in other parts of the country too. Recently, three bills have been passed in the Indian Parliament which are likely to have deep rooted and radical implications for the farming community in India and also affect the relationship between the farming sector, the market and the wider national economy. The three bills which have been passed are The Farmers’ Produce Trade and Commerce(Promotion and Facilitation)Bill, The Farmers’(Empowerment and Protection) Agreement on Price Assurance and Farm Services Bill, and The Essential Commodities(Amendment)Bill. The recently concluded Monsoon session of the Parliament saw the introduction of these bills and thereafter it became one of the central focuses of the public discourse, igniting widespread debates in the media and popular discontent among agitating farmers in several parts of the country.

Why are Indian Farmers Unhappy and Discontented With the Passage of the Three Bills?

Indian farmers have been quite unhappy and discontented with the passage of these three bills in the Monsoon session of the Parliament and have been bringing forward their disproval and anger through a series of protests that are going on many states in India, predominantly Haryana and Punjab. While it is true that the protesting farmers have shown discontent towards all the three bills, they seem to be particularly unhappy with the provisions of the first bill or the The Farmers’ Produce Trade and Commerce(Promotion and Facilitation)Bill.

What we have to note here is that the protesting farmers who have mobilised themselves against the government’s decision to pass these three bills did not initially have a singular leadership nor did they have an officially recognised uniform set of demands that they would have liked to put before the government.

But from the protests that have been going on in different parts of the country against the three bills, it has been gathered that the farming community in India is largely unhappy or has shown discontent regarding certain core aspects or key ideas introduced through these bills regarding the farming sector.

The key areas that seem to have captured the attention of the farmers and have become the central points of agitation seem to be revolving around the “trade area”, “trader”, “dispute resolution” and “market fee” as introduced in the first bill.

The discontent and anger among farmers from different parts of the country has led to the coming together of various farmers’ organisations, transcending intricate differences in ideology and outlook.

The farmers assert that this is the right time to leave behind differences in ideology and agenda and come forward to agitate against the three bills which they see as anti-farmer.It is in this context that we have seen the coming together of nearly 31 farmers’ organisations.

By coming together, these farmers’ organisations which otherwise have very different and diverse perspectives and ideologies, have shown that the bills uniformly anger and infuriate farmers irrespective of differences.They have also developed a common program that called for a ‘Punjab Bandh’. The ‘Punjab Bandh’ called for a statewide bandh in Punjab on September 25. Many places throughout the state saw a successful bandh organised by the farmers in Faridkot, Muktsar, Ferozepur, Barnala, Jalandhar, Patiala, Moga, Bathinda etc.

Many farmers’ unions came in support of the bandh including Bharatiya Kisan Union Krantikari, Kirti Kisan Union, Bharatiya Kisan Union, Kisan Mazdoor Sangharsh Committee and BKU. Police personnel in large numbers were deployed in different parts of the state to ensure that law and order was retained throughout the state while the protests went on. The conduction of the statewide protest in Punjab led to disruption of day to day services including transportation and availability of essential supplies.

If we were to look briefly at what the three farmers’s bills try to do, we would be in a better position to understand why they have been successful in angering the farmers and compelling them to go out to the streets to protest.

The Farmers Produce trade and Commerce(Promotion and Facilitation)Bill now allows farers to go and sell their produce at any place, unlike the older rule where they were only required to sell at the APMC-regulated mandis. The Centre has asserted that such as attempt is not towards the shutting down of the mandis but only an attempt to widen the horizon of choice available for the farmer wanting to sell his produce.

So if the framer finds a better deal outside the APMC regulated mandis, he is now capable of going ahead and making the most of it.

The second bill, The Farmers’(Empowerment and Protection) Agreement on Price Assurance and Farm Services Bill, is a framework for farmers to be able to enter into what is known as contact farming with a company and only produce according to the requirements of the company and receive a remuneration decided by the company, such an agreement frees the farmer from any responsibility of selling his produce at the regularised mandis.

The third bill, The Essential Commodities(Amendment)Bill is an attempt to allow economic agents to be able to freely hoard food produce without worrying about being prosecuted for hoarding such  essential commodities.

Although we have tried to look into the major assertions of the three bills which were recently passed quite briefly, it is clearly visible even from this brief yet sharp understanding that this is an overt attempt to liberalise the agricultural sector and the farm-markets. The underlying assumption here seems to be that it is the liberalisation of agriculture alone that will make the system more efficient and profitable for the farmer.

The idea that is being constantly put forward is that the liberalisation agenda will allow the farmer an opportunity to multiply his income, avail more choices in the market and will in its totality make the Indian agricultural system more remunerative an enterprise.

While the establishment has highlighted the apparent gains of having passed the three bills, it is clear that farmers throughout the country have not taken it too well and in fact dramatically  opposing meanings have been derived from what the government looks at as ascertaining of efficiency and profitability in Indian agriculture. Here is how the farmers’ bodies have seen the three bills and the points that they have been raising.

•Farmers in India are asking the government, whether through the apparent freeing of the farmer from the clutches of APMC regularised and often exploitative mandis, it is really trying to ensure that the income of the farmer is multiplied or is it only washing away its hands from its responsibilities towards the protection of the farmers through MSP? They argue that by allowing the market to become a more stronger player, it is withdrawing from its responsibilities of guaranteeing the farmers a Minimum Support Price(MSP). MSPs function in APMC regulated mandis and not in private markets.

•Farmers in the states of Punjab and Haryana have seen the model of MSPs work efficiently and therefore through the erosion of the system, they fear that companies/corporate players in the market may not offer them the equal dignity and prices that they had been assured of by the previous system.

The issues that are being raised by the farmers are genuine and in need of urgent acknowledgement, and what we also have to realise is that while the bills don’t call for the eradication of the APMC regulated mandi system, they indicate at a weakening or losing of the structure and Indian farmers are not quite comfortable with such a proposition. While the proponents of liberalisation and privatisation underline the need to widen the scope of options available to the farmer and highlight his right to multiple choices in the market, but the farming community has shown its reservations with this approach and said that the empowering of the corporate sector in Indian farming will weaken the voice of the farmer and will leave him insecure.While rich/big and elite farmers may have the possibility of better negotiating powers in the face of corporatisation, the small and marginal farmer is likely to be worst impacted. Farmers have shown scepticism towards the move of the government and feel that the government shouldn’t run away from its responsibilities. Moreover, in the absence of even basic governmental support, the farming community in India is likely to become even more vulnerable and voiceless.

It is high time that the Centre listens to their anguish, pays heed to their demands and arrives at a consensus that is truly in tune with the requirements of the farming community in India.