While documenting the highly inspiring history of the freedom movement of India historians often tend to give more attention to the phase after 1919 with the result that some highly inspiring episodes which took place before this do not get adequate space. This is perhaps the reason why the highly inspiring saga of martyr Bagha Jatin ( 1879-1915) has not received the kind of attention and space it richly deserved.

As a result of the brief mention generally given to the untiring efforts of Bagha Jatin in most history books, people generally know only about the last daring battle fought by him and his four companions in Balasore ( Odisha) but while this battle was no doubt the pinnacle of his life of courage and daring, there is much more in his life which is highly inspiring. A wider understanding of the scale at which he planned his activities relating to freedom movement is  overdue.

Jitendranath Mukherjee was born in Kushtia ( located in present-day Bangladesh ) on 7 December 1879. In his youth when a tiger attacked a fellow-villager, Jitendra  single-handedly fought the tiger and finally killed him with a dagger. This earned him the name Bagha Jatin by which he is still widely known. Soon tales of his courage spread. Time and again he fought strong and powerful men to protect weak persons who had been humiliated or insulted. He was also involved in relief work.

To understand his subsequent life we should take a look at those distress-ridden times in India. After the suppressing of the great rising of 1857 unprecedented cruelty was unleashed on freedom-fighters and even ordinary people. Colonial exploitation continued to increase. The resulting distress peaked towards the end of the century when as many as 9 million ( 90 lakh) people of India are estimated to have perished in various famines during the five years 1896-1900.

At the same time however the resistance of people continued in the form of various movements of peasants against exploitative practices and indebtedness. These movements included the famous resistance of Adivasis led by Birsa Munda. The research and writings of Dada Bhai Naoroji increased consciousness about  the forms and extent of colonial exploitation. While the Congress in its initial years was more a forum of dialogue than resistance, the ideas of Swami Vivekananda had spread far and wide in a short span and were a beacon of light for those who were keen to re-assert the self-respect of people.

As the new century began sacrifices of more assertive leaders like Lolmanya Tilak and radicalization unleashed in the movement against the proposed  partition of Bengal further paved the way for the emergence of revolutionary groups in places like Punjab and Bengal. In Punjab some very noble and brave freedom fighters of Ghadar Party were making preparations for a rebellion. In Bengal similar efforts were being made by Yugantar. There are some indications that freedom fighters of these two organizations were in touch. Rashbehari Bose was involved in both places. There is some indication that Kartar Singh Sarabha ( great youth leader of Ghadar Party whom Shahid Bhagat Singh regarded in his heart as an elder brother) had visited Yugantar as a teenager.

Growing up in these times of distress as well as yearnings for change, Bagha Jatin came under the influence of Swami Vivekananda and Sister Nivedita spoke glowingly about the strength and determination of this young man who made a strong impression on her. This social commitment took a more specific direction of lifelong commitment to freedom movement under the inspiring influence of Aurobindo Ghosh. He had very high hopes from Bagha Jatin and Jatin spared no effort to live up to these high hopes.

Bagha Jatin was a leading freedom fighter associated with Yugantar. He was imprisoned at an early stage and after his release he devoted his full time to the movement. While he was earlier involved in relatively smaller actions of avenging injustice and organizing resistance, he now started planning big, forming partnerships with others like M.N.Roy.As the possibilities of a war between Germany and Britain and even a world war were increasing, Jatin started planning in terms of getting German arms and other help for freedom movement  in India. One of the most ambitious plans was to get hold of German armed boats in Sumatra and to move in these swiftly towards Andamans to free political prisoners. There was another plan to receive German arms in coastal Odisha from special ships so that the revolutionary struggle would be assured of high quality arms. For this purpose Bagha Jatin moved to the rural areas of Mayurbhanj and Balasore in Odisha.However spies spoilt these ambitious plans and on the basis of the information provided by them, the police raided several addresses of Yugantar, Jatin and his colleagues. Finally Jatin escaped with four colleagues and hid in forest areas while moving towards Balasore coastal area. However these young men soon confronted a much bigger and heavily armed police force.

In the ensuing battle Jatin received bullet wounds and died next day in a hospital, after taking responsibility of all these actions on himself. His close companion Chittapriya Roychaudhri  attained martyrdom in the battlefield. Two other companions  Narendranath ( Naren) Dasgupta and Manoranjan Sengupta were sentenced to death. Another companion Jotish Chandra Pal died in the course of a long prison sentence. It is said that he wrote the story of their battle on walls of his jail-cell. This story of their very brave resistance and sacrifice should never be forgotten.

Senior police official Charles Tegart who was involved in actions against  Bagha Jatin said that if someone had fought like  Jatin for England then his statue would be placed next to Nelson at Trafalgar Square. 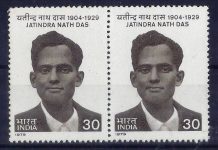 Recalling the Sacrifice of Brave and Exemplary Jatindra Nath Das