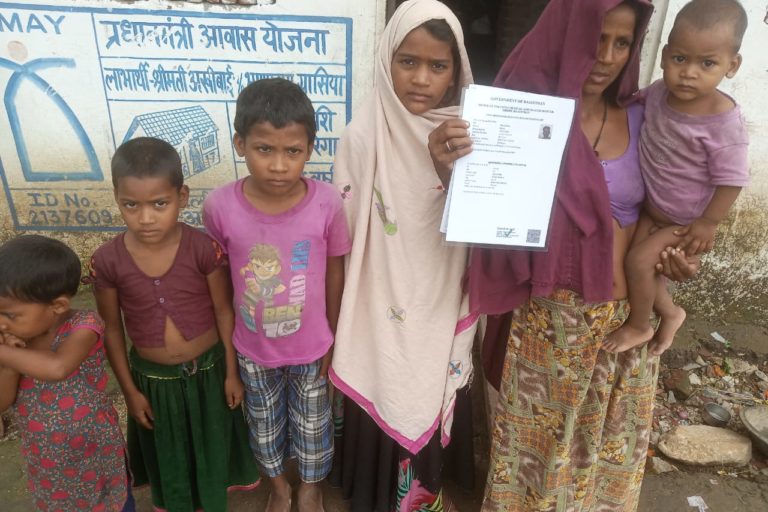 Akki Bai, 37, who lives in Kharapalli, a small village of Sirohi district in Rajasthan, lost her husband Bhana Ram in May, this year. Bhana, 42, who cut sandstone in a factory in the nearby town of Pindwada succumbed to silicosis, a lung disease. Now Akki Bai, mother of five young children, stands clueless, holding a piece of paper, which certifies that silicosis claimed her husband.

“Bhana had registered on the government portal and he was a certified silicosis patient. He didn’t get the relief money as per the rules but we are fighting so that his family gets justice,” Jagdish Kumar, a local activist told Mongabay-India.

This is not just one case. Even after one year of the announcement of “Policy on Pneumoconiosis Detection, Prevention, Control and Rehabilitation” by the Rajasthan government, thousands of sandstone miners and artisans suffering from lung diseases still await relief and justice. Mongabay-India spoke to many such workers and their families in several districts of the state and found that while many patients who were connected online to the portal of state government were receiving the benefits, other certified patients, who weren’t digitally connected, remained deprived of the benefits of the policy.

Officers executing the welfare scheme claim that within a few weeks all the offline patients will be linked to the online portal and their problem shall be addressed.

Pneumoconiosis, represents a set of lung diseases that are caused due to inhalation of dust, characterised by inflammation, coughing, and fibrosis. Although in Rajasthan most of the workers suffer from silicosis – one of the diseases covered under the pneumoconiosis policy.

“(In Rajasthan) Almost 95 percent of cases are of silicosis. We have not come across the patients of any other disease, but when we designed and drafted the policy we thought we should take the future also into account and therefore the name given to it was ‘Policy on Pneumoconiosis’ so that tomorrow if the patient of any other dust diseases is found he or she can be covered under this programme,” P.K. Sishodiya, a doctor and consultant with the silicosis programme of the Rajasthan government’s labour department, told Mongabay-India.

Silicosis leads to prolonged illness and painful death. Workers who go to stone quarries and crushers are the biggest victim of this. Besides, artisans engaged in gem cutting, stone carving, sculpture making and polishing industry are also highly prone to this disease.

Earlier, Mongabay-India had reported about the plight of the miners and artisans who dig and cut the stone for palatial homes as well as historical monuments like Red Fort, President House and Akshardham Temple in the capital of India. These labourers are also cutting stone day and night for the grand Ram Temple being erected in Uttar Pradesh’s Ayodhya town.

In India, Rajasthan has largest geographical area under the mining sector and has the highest number of mining leases in the country – a total of 33,122.  Most of the sandstone mines and quarries are in the unorganised and small-scale sector. Sandstone mining is done in majorly in six districts of the state including Jodhpur, Bundi, Alwar, Bharatpur, Karauli and Bhilwara.

The government claims that the mining and mineral processing industry provides direct or indirect employment to at least three million people. But the lives of the communities involved in it are stuck with diseases and poor health facilities.

The policy, which was launched last year, acknowledges that “the focus needs to be on prevention, as there is no cure” of this disease. It declares the “ultimate aim” is “to provide relief and rehabilitation to affected persons.” The policy covers not only mine workers and their family members but also the “habitants residing in the neighbourhood of mines and industry” who are likely to be exposed to dust which may cause pneumoconiosis.

The government provides Rs. 300,000 as one-time assistance to the affected person after certification and a pension of Rs. 1,500 per month and a sum of Rs. 200,000 to the legal heir or nominee in the event of the death of the victim. There is also a widow pension to wife and benefits under Palanhar scheme. On the death of the pneumoconiosis patient, the government also provides funeral assistance of Rs. 10,000 to the dependent. The certification also makes the patients eligible for several social welfare schemes run by state and central government.

The real number of silicosis patients are unknown

The exact number of silicosis patients isn’t known due to the lack of infrastructure for diagnosis and certification. According to an audit report by Comptroller and Auditor General (CAG), which was tabled in Rajasthan assembly in 2018,  a total of 7,959 silicosis patients were detected between January 2015 and February 2017. In these two years, 449 people died of silicosis in just five districts of Rajasthan.

The official portal of the state government shows currently there are more than 17,000 certified silicosis patients in the state. However, the portal was launched in 2018 and it does not reflect a large number of certified patients who are still offline.

Mongabay-India spoke to several government officials, doctors and social activists working with a silicosis programme to estimate the total number of patients who are not linked to the online portal. They suggested that an estimated 8,000-10,000 certified silicosis patients are still offline. The government believes digitisation will make things clearer in the near future.

“The entire effort is towards making it (the database) systematic so that we can control and monitor it better. Until now everything was on the whims and fancies of verifying and sanctioning officers in the districts. They (patients) had to go from pillar to post for everything but still, they were not in our monitoring web. Therefore, we decided to make an online database. Since we have a robust system of e-mitras on the ground, it helps them register online for all government schemes,” Gayatri Rathore, who is Rajasthan government’s Principal Secretary, Social Justice told Mongabay-India.

Just 200 kilometres away from state capital Jaipur, Prabhu Dayal, 55, narrates the tales of silicosis patients of his villages. He recounts names of those who succumbed to silicosis and who are alive but almost disabled.

“We have lost so many people to this disease … 56 men of this village alone are suffering from silicosis. Some of them have been immobile because of this disease. They can’t breathe properly and are almost lifeless,” said Prabhudayal of Karauli District, who himself is suffering from this lung disorder.

Although Rs. 1,500 pension alone is insufficient for the survival of a silicosis victim, the certification makes the patient eligible for all the benefits given to citizens under Below Poverty Line (BPL) like subsidised ration and free medical care. It also makes the patients eligible for the Palanhaar Yojana which is a monthly cash transfer programme that aims to nurture, educate and provide health care to orphans and other vulnerable children in a family setting. Under the policy, monthly Rs. 500 is given for any child below the age of 6 and Rs. 1,000 per month for any school-going child between 6 and 18.

“We are not satisfied with this meagre amount of monthly 1,500 as pension but clubbing of pension with Palanhar scheme provides a huge relief for these poor people. If a person has three school going kids, he will get monthly 3,000 under Palanhar scheme and with his pension (of 1,500) it becomes a monthly sum of 4,500. That way it is a great relief,” Nikhil Dey, transparency activist who has been fighting for the silicosis victims for many years, told Mongabay-India.

But there are many silicosis victims who still wait for the full benefits of this policy. Like Mohan Singh, 42, who has just started receiving the monthly pension but has not been able to get the benefits under the Palanhar Yojana.

“I have two school-going children of 14 and 11 but since I had applied offline, they (officials) say it will take some time to get money under the Palanhaar Yojana. I can’t walk more than a few steps as my lungs have been badly damaged. These are hundreds of people in our block who are suffering the same,” said Mohan Singh of Pindwara block of Sirohi district.

Obstacles and the road ahead

One of the biggest problems is that dealing with silicosis is not in the hands of one department or ministry. While the social justice department looks after the relief and rehabilitation, it is the job of the labour department to control and prevent the disease. Similarly, there is a certain role of mining, health and finance departments in it. Officials inform that coordination is certainly an issue and “technical and bureaucratic roadblocks” impede the work.

For instance, last year, the state government had announced the formation of a pneumoconiosis fund, for which money is to be sourced from the District Mineral Foundation (DMF), Building and Other Construction Work (BOCW) welfare fund, the state budget and Corporate Social Responsibility (CSR). Until now, this fund has not come into effect and the matter is still lying with the state finance ministry.

“There are some legal issues. For instance, if I provide compensation to someone in the district of Ganganagar, the question will be asked how can I use the DMF fund (for a patient living there) because there is no mining in Ganganagar. So, you see there are small yet important issues and we are discussing them with all the departments at the state level and until a central pool is created the difficulty will remain there,” Gayatri Rathore told Mongabay.

Control and prevention are critical because this lung disease has no cure. With the increasing use of machines for cutting the stone the danger has multiplied manifold. Young men who start work at the age of 20 find themselves in the grip of silicosis within 10 years’ time and a painful death becomes inevitable for them.

“Ideally speaking, whatever machines are being used in this business, be it drilling, cutting, mining, chiselling or stone carving which is main work in BOCW, they should come with the dust collection system. Now we have such machines that are equipped with this (dust collection) facility, but unfortunately, they are a little costly and you know rather than employing those machines a jugad is made but it doesn’t work,” Sishodiya said.

Clearly the battle of silicosis victims isn’t over but the new policy is definitely a step forward and to achieve this, the perseverance of victims has played a big role.

“Whatever progress has been made it is because of the efforts made by victims only. The credit should go to them. True, we (the social activists) helped them but can you believe that people who were bed-ridden, couldn’t move and knew that they would die in a few days, came all the way to Jaipur from different parts of the state and sat on dharna and protested. The mere sight of such victims made one shudder. That spirit of brave hearts has brought this battle to this point today,” Dey told Mongabay-India.

This article was originally published in The Mongabay.