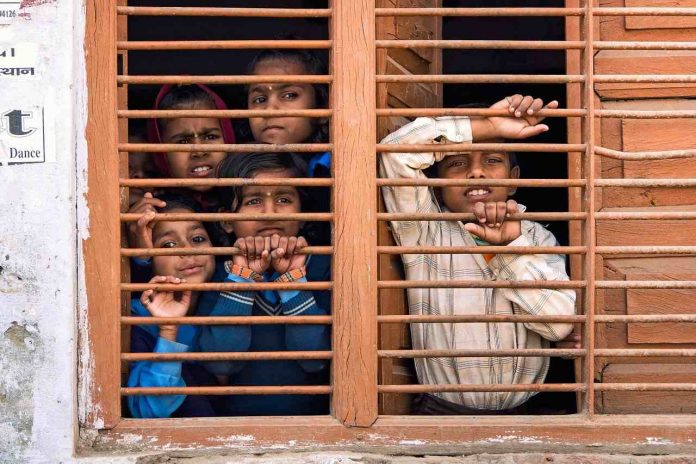 Many months ago, I visited Sheo, a small village in the Barmer district of western Rajasthan. I was in this area to understand the difficulties of teachers in schools and one of the difficulties for many teachers and other people, including me, was the lack of internet and network connectivity in mobiles. It was surprising for me to hear from one of the teachers in a school that he has to walk to the top of a hill near the school, just for getting a network on his phone. Can you imagine that? Many teachers in this area have to go through this along with other difficulties. The question of having accessible internet is a far reaching goal for many people in this area.

In this area, currently, government schools are shut down because of the risk of COVID-19. Since the schools are shut down, children have no opportunity to attend classes and learn different subjects. As we all know, this is not only the issue of the schools in Barmer but it is the issue of many schools in various districts in our country. But to this, the major solution which has come out is the practice of conducting online classes. This definitely is a great idea because it helps the children to not lose track of their learning and can continue their education. But does this practice give equal opportunity in terms of accessibility and learning for all children in the country?

According to the Digital India 2020 report, only 50% of the total population of the country uses the internet and the annual growth in the number of internet users is increasing by 23%. But still, we have to understand that there are a huge number of people who do not have access to internet and may not have sufficient knowledge in using technology. So if there are households in which there are children who do not have access to internet, then how do they continue their learning with their peers? Basically, this creates a ‘digital divide’. Digital divide is the “technology gap that occurs when minority, rural, and poor populations do not have the same access to machines and information as the rest of society” (Mesires, 2002). An addition to this definition is that there are populations that do not have enough knowledge on how to use technology or are not able to understand the language.

This divide can create a pause in the learning of the curious children and they can lose track of whatever they had learnt in schools. This also creates an issue in which the children lose the opportunity to continue their education and in these areas, the children would have to engage in other activities depending on their gender. The male children would have to engage in manual labour and ensure to earn a living for his family. The female children would have to take care of the household by looking after their siblings and doing other chores. We have to realise that this is happening because of the socio economic conditions of the households. Otherwise these children are just like us, who are eager to learn and pursue their interests for a better future.

The National Education Policy 2020 promises to address the issue of digital divide. It states that to address the issue of digital divide, the substantial population “whose digital access is highly limited, the existing mass media, such as television, radio and community radio will be extensively used for telecast and broadcasts” (Ministry of Human Resource Development, 2020). These programmes would also be available in different languages depending on the region as well as it would be broadcasted 24/7. Again, this shows that the education which would be provided is limited and there can still be areas in which there is no accessibility to this kind of technology. Also would this be sufficient for addressing the issue of digital divide during the times of pandemic?

There are other issues in these areas where they do not even have basic facilities such as electricity. Then how can we expect children to use technology and attend online classes? When I was visiting one of the schools in the district of Barter, I was able to interact with a few children. One of the students was telling me that they got an electricity connection only months back. There are many schools, especially single teacher schools (primary schools) where there is no electricity connection. The teachers in the schools take years to get the electricity connection for their schools. But even if they do have electricity, there is another major issue which we are familiar with, which is, power-cuts. In these areas, power-cuts are frequent. When I was staying in the schools, power-cuts happened mostly in the mornings and afternoons. Given the reality of these areas and the hardships that people have in terms of accessibility to the internet and other resources to establish connectivity, how do we expect children to attend online classes from their homes when even the schools do not have electricity? We need to understand that if there is no careful planning and action being taken in this area, then the gap would only increase and this can hinder the trust of the children and parents on the type of education given by government schools or even worse, children may face the risk of being completely excluded from basic education.

Elwin Varughese is working in the field of Education. He has completed M.A. in Education from Azim Premji University, Bengaluru.