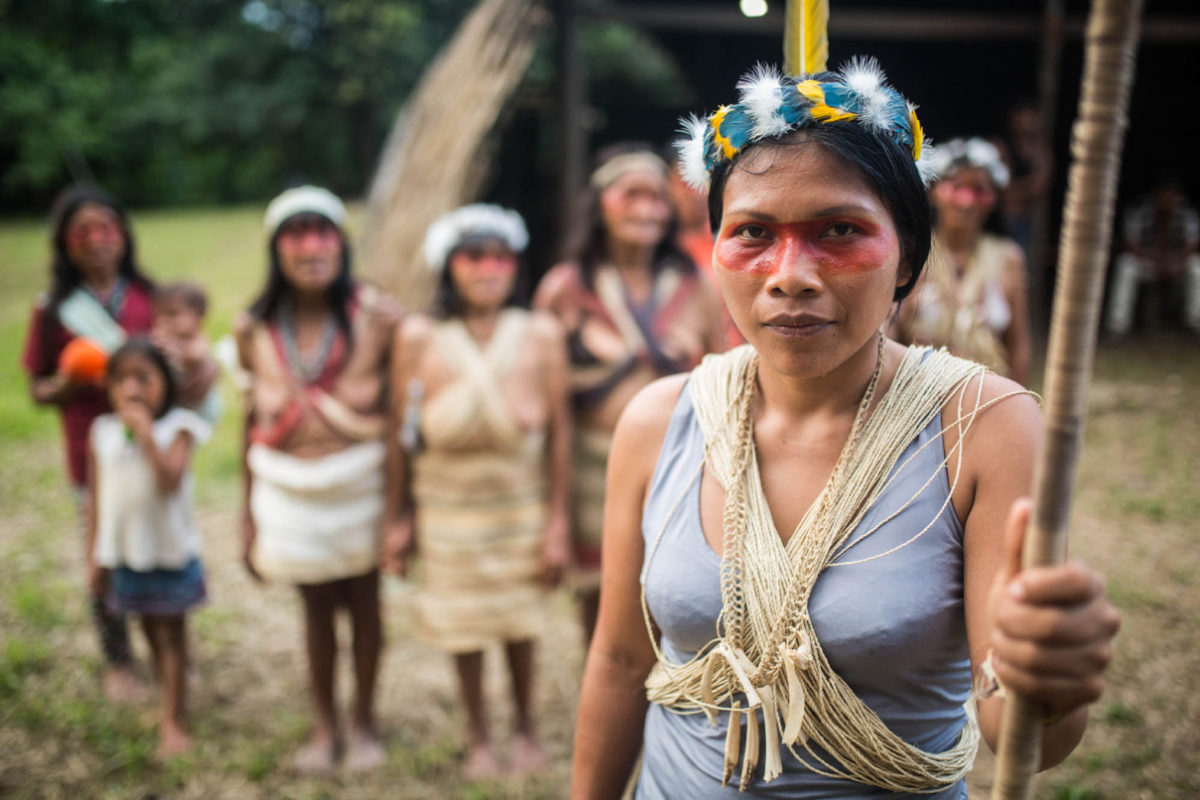 QUITO, Ecuador — It was a historic moment in April of 2019. Dozens of Indigenous Waorani plaintiffs filled a small courtroom in Ecuador’s Amazon city of Puyo, many of them carrying long spears and wearing traditional red face paint and feathered headbands, but all of them smiling and cheering for joy.

A three-judge panel had just ruled in favor of the community in their lawsuit against the government, which immediately cancelled government plans to sell their territory in the Amazon rainforest to the highest-bidding oil company.

Hundreds of Waorani and their supporters marched through the streets of Puyo following their victory, which saved their homes from immediate destruction and set an important legal precedent for other Amazonian communities in the same struggle.

On Wednesday, Time magazine recognized this struggle by including Nemonte Nenquimo, one of the Waorani women leaders at the head of the lawsuit, in its list of the 100 most influential people of 2020.

“We are not waiting for the government to respect us. We are demanding that they respect our life, our home, our culture and our territory. That’s the most important thing now,” Nenquimo told Mongabay by phone from her home in the town of Shell, outside of Puyo late Wednesday.

The 35-year-old Waorani leader said she’s proud to receive the Time 100 acknowledgment, calling it a recognition of her ancestors and elders who have guided her and the Waorani people.

But she says it is also an important achievement for Indigenous women in particular.

“Many times, women have been leaders, we have been voices, but we have not actually been listened to,” she said. “This recognition gives me a lot of encouragement. It gives me a lot of strength on behalf of all the women who are fighting on this planet. We want to unite.”

Time revealed the list in a televised event on Sept. 22, where names were read out according to category: pioneers, artists, leaders, icons and titans. Nenquimo was the only female Indigenous leader on the list. She appears in the “leader” category alongside major global public figures, both praised and controversial, like U.S. President Donald Trump and Brazilian President Jair Bolsonaro, but also Paris Mayor Anne Hidalgo for her work in reducing the city’s carbon footprint, and Congolese microbiologist Dr. Jean-Jacques Muyembe Tamfum for his research and battle against the Ebola virus, among others.

The long road to leadership

Nenquimo learned the importance of protecting the Waorani territory when she was just 6 years old, after listening for hours to her grandparents recount stories of battles against other Indigenous tribes encroaching on their land. This is when she knew she wanted to be a leader, she said, and even had dreams about it.

As a young woman, Nenquimo left her territory in the Amazon Rainforest at several points in her life to study and work in the capital Quito, but she never felt comfortable here, she said. The elders in her community in the rainforest always told her she was on the wrong path.

Nenquimo’s life changed when she went to visit the northern Amazon city of Lago Agrio, where she saw the black pools of oil contamination left by oil companies in the region as far back as the 1970s, which continue to affect the Indigenous communities there.

“Here, rage was born, because I saw these [other Indigenous communities] also had a large territory, and many animals, many fish, but the oil company had already entered, and contaminated it,” she said. “And I saw that the oil carried disease and death.”

That’s when she realized the importance of creating alliances between Indigenous communities to battle their new intruder together: the extractive industries. In 2015, she co-founded the Ceibo Alliance, an Indigenous-led coalition between the A’I Kofan, Secopai, Secoya and Waorani nations of Ecuador’s northern Amazon Rainforest. They began working directly with communities on things like environmental monitoring, clean water projects, and mapping their own territories to show the rainforest is more than just trees, oil and mining resources.

In 2018, she was elected the first female leader of the Waorani organization of Pastaza province, CONCONAWEP.

The following year, Nenquimo and other Waorani leaders led their communities in a historic lawsuit against three government ministries, suing them for fraudulently getting community consent to sell Waorani territory in an international oil auction. She and other leaders worked tirelessly to organize the 16 isolated Amazon communities involved in the lawsuit, and helped collect evidence for their lawyer, Lina Maria Espinosa, who argued the winning case.

“Our territory is not for sale,” Nenquimo said. “We were very clear, and united with both the elders and the youth. We said, if the government does not pay attention, we, with our strength, with our own song, with our own spirit, we will show them the truth. And we won.”

Mitch Anderson, executive director and founder of Amazon Frontlines, a nonprofit organization that has worked with the Waorani community for almost a decade, said Nenquimo’s mention in the Time 100 list is “a powerful recognition” not only of her leadership, but also the work of Indigenous people in general as they fight to build alliances and protect their land, their rights and the environment in the face of climate change and growing threats.

Nenquimo’s leadership didn’t stop after the trial. During the COVID-19 pandemic, she and other Indigenous leaders coordinated with local universities to bring COVID-19 testing out to territories in the isolated regions of the rainforest, which the government had been neglecting to do. They also won another lawsuit against the state, with the court ordering it do more to coordinate with Indigenous communities in the wake of the deadly pandemic.

For the past few months, CONCONAWEP has been collecting school supplies and seeking volunteer teachers to give lessons in the communities in the rainforest, where it’s impossible for children to participate in classes via Zoom or WhatsApp as they are doing in the rest of the country.

In the wake of a pandemic that has caused the Ecuadoran economy to plummet, Nenquimo said their biggest fear is that the government “will want to enter with force, without respecting our territory.”  Over the course of the past five months, the government has already passed new regulation to facilitate oil palm agriculture, and has been actively soliciting international mining investment, two other major threats to the Indigenous territory in the rainforest.

“This is what they must understand about climate change and this pandemic. Why did it arise? Because of pollution, destruction,” Nenquimo said, adding that the world needs to become more aware of and trust Indigenous leadership. “We know the dangers that are coming along the way. That is why we are protecting. We don’t want more contamination, destruction, or exploration in the jungle.”

Kimberley Brownis a freelance writer and video journalist based in Quito, Ecuador. She has been living in Latin America and covering regional society and politics – with the occasional environmental story – for the past four years. To see more of her work, follow her on Twitter @KimberleyJBrown

This article is originaly published in The Mongabay.