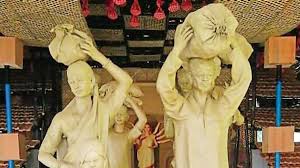 It is not surprising to see how the Indian economy is opening up constantly on the one hand, but on the other hand, the minds of our youth are getting closed proportionately. Hindutva – a deterministic version of Hinduism – has always survived with inexplicable contradictions. The adherents of this conception of Hinduism believe in fighting for preserving our tradition, but only by embracing modern technologies that facilitate the diffusion of western modes of orienting our life. They want India to be a world leader (viswa guru), but only by making themselves settle in Texas, Los Angeles, or say – for that matter – Amsterdam. This version of Hinduism, strangely, has penetrated every corner of our public sphere: be it the corporate world – where the white-collar professionals are compelled to recognize the feminine through the policies, or the media houses – where sadism has become the new normal. Everyone is tempted to become a warrior for the Hindutva pantheon, maybe, because resisting this tendency carries along with it the possibility of receiving a certificate of cowardice or timidity from the self-proclaimed guardians of Hindutva either through social networking sites, or face-to-face verbally.

Often, I feel, there is no escape from this lunacy. The crassness of the egoistic modern intellectuals towards the understanding of religiosity has allowed the hyper-masculine watchdogs of Hindutva to make instrumental use of Hinduism – making a deep & meaningful philosophy – look shallow, insipid & superfluously aggressive thus. No wonder why the portrayal of Bharat Mata went through a peculiar transition starting from the hands of Abanindranath Tagore to the political motives of RSS (Rashtriya Swayamsevak Sangh). And this temperament usually gets manifested in the presentation of other deities as well. The way, for instance, Lord Hanuman is being portrayed these days on the stickers & posters, it seems Rudra Avatar (incarnation) is the only aspect of his entire story. Without doubt, the amour-propre (see Rousseau) of Hindutva has always remained frightened of effeminacy precisely because it may never afford to have the gut to experience the androgynous essence of a Ball singer, or the unconditional love of Ramakrishna Paramahamsa, or the art of sublimating everything lower into higher like a Sufi mystic Nizamuddin Aulia. It seems unaffordable for them because feminity longs for an attitude which confronts the politics of the day with a song, or a poem, and motherly love (see Erich Fromm) knows how easy it is to defeat – but it takes courage to win someone. Indeed, to understand this sublime nature of Hinduism, or any other religion, one needs to understand how the all-pervading idolatry of power operates through our conditioning.

Yet, I feel grateful to an artwork of a sculpture artist that gave me a ray of hope in this era of reductionism. His portrayal of mother goddess Durga (migrant labourer), also known as Shakti, made the understanding of this deity open to interpretation once again. Ergo, as a Bengali who was born in Bihar & brought-up in Jharkhand, I present to you certain perspectives of this festival along with my own. Although it is not possible to explain all the ways through which this carnival of divinity could be seen, I shall just try to illustrate how every phenomenon taking place in our lifeworld can carry along with it an ambiguity of its own. So let me begin with a school of thought called “Functionalism”, which would take a macrostructural approach & argue that Durga Puja is necessary because it provides us with an opportunity to meet our near & dear ones. This enriches our solidarity by making us rejoice together – or in Durkheimian language – it makes us experience a ‘collective effervescence’. Similarly, a Marxist might claim this occasion to be a bourgeois conspiracy to divert the minds of proletariats from their exploitative condition. In other words, for a Marxist, worshipping goddess Durga is a hindrance in the making of a “class-for-itself” that will prioritize their material condition over everything else. An Ambedkarite, furthermore, shall attempt to prove this tradition Brahmanical. Since the entire Hindu society has been constructed by the Brahmins for their benefit this ritual has no space or place for the Dalits of our society. In short, it privileges the so-called forward castes & excludes the Dalits. And there is a panoply of such arguments that may never end in this lifetime.

However, after accepting all these contextual thoughts as real & tangible in a post-structural & post-modern world, I am sharing yet another reading of Goddess Durga which is different from the above-mentioned arguments. This goddess, for me, is an agglomeration of various symbols that provides a prescription to the interior of our subconscious mind. The Lion symbolises ‘fearlessness’; the female deity represents ‘creativity’. And according to the myth, the demon (Mahisasura), which symbolizes greed, anger, envy, lust, and everything negative that becomes a barrier for self-actualisation – is assassinated by the Goddess. This naturally means that to worship Durga is to evoke the capacity to become fearless, of course, by eliminating the Mahisasura present in us. This interpretation also fits well with the etymology of two complementary words which are also synonymous in the religious sense: ‘Durga’ and ‘Shakti’. The word Durga comes from ‘Durg’ which refers to a ‘fortress’ and the word ‘Shakti’ refers to ‘power’. Undoubtedly, a mind (fortress) can protect itself from exploitation & abuse only by a Power that comes from within after eliminating Mahisasura (darkness).

Hope the fanatics & bigots of every form find the courage to evoke Goddess Durga in their hearts by acknowledging & renouncing their hypocrisies.

Sagar Dey is a Ph.D scholar at Department of Sociology, Delhi School of Economics.