Several members of the Valmiki community have been angered and infuriated with the the way in which the Hathras gang-rape case has been dealt with by the government and to express their discontent, as many as 236 members of the Valmiki community have converted into Buddhism. The community has been showing their discontent and anger with the treatment of the issue and in a protest against the government went ahead and converted into Buddhism .

This episode of mass religious conversion is being reported from Ghaziabad, Uttar Pradesh. According to the report published in The Indian Express, many members of the Valmiki community had decided to convert into Buddhism in Ghaziabad after the community lived many days in sheer anguish and discontent with the political proceedings of the Hathras case and the government’s take on the issue.

These members of the Valmiki community converted into Buddhism on October 14 in the district’s Karera village. On this occasion the community members read out 22 pledges before Rajratna Ambedkar, who happens to be the great grandnephew of B.R. Ambedkar.

It is to be acknowledged that the date on which the community members converted to Buddhism has a symbolic significance because this was the historic date when the great leader of Dalits, B.R. Ambedkar converted into Buddhism along with 3.65 lakh of his followers over six decades ago.

The members of the Valmiki community, as reported by The Indian Express have shared that they feel angered and violated because of their caste and have been facing rapid discrimination, they also said that the Hathras case has acted as a final test of their patience and it has forced them to leave the oppressive shackles and convert into Buddhism.

The Hathras gang-rape case came at the centre of media attention after a nineteen year old woman was raped and tortured in the Hathras district of Uttar Pradesh. The girl died of her injuries in a hospital in Delhi on September 29 and this sent shock waves throughout the country.

The body of the girl was forcibly cremated in the dead of the night and the woman’s family was denied the right to see it or perform the last rites with dignity and the state police made a sustained effort to block media entry into Hathras and make it a focus of popular protests.

The Hathras incident highlighted afresh the deeply entrenched and societally rooted menace of sexual violence against Dalit women in India.

While the Uttar Pradesh government had been in constant denial of the possibility of rape citing the reports from the forensic tests indicating the absence of sperms in the victim’s body, widespread condemnation of the way in which the case has been tackled is doing the rounds in the media. Moreover several allegations of medical negligence and a delayed collection of forensic evidence from the victim’s body have been cited to underline the lacunas in the treatment of the issue.

It  was alleged that the samples were taken from the victim’s body more than eleven days after she reported rape. The issue of delayed collection of forensic samples from the woman’s body and the assertion that there was an absence of sperms, critics argue doesn’t indicate that there was no rape but the fact that the authorities took the samples at a time when the body naturally loses sperm traces according to medical sciences even when rape has taken place at an earlier date.

It was in this context that two doctors of the JNM College, Aligarh (where the woman was undergoing treatment)who contradicted the claims of the police that there was no rape, were removed from their posts recently. 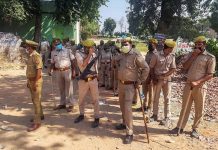