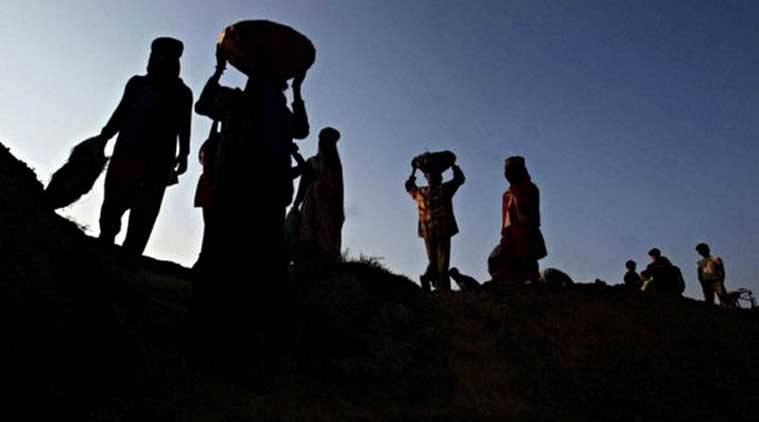 The lack of social security nets and its adverse implications for the economy have become more clear than ever amid the coronavirus pandemic and the migrant crisis. More than half of India’s regular wage earners have hit the rock-bottom amid the coronavirus pandemic and the subsequent lockdown, this situation could have been averted but only if we had social security nets in place.

This is evident by data from numerous sources and data by both government and private agencies. What has added to the migrant worker crisis is the fact that lakhs of migrant workers in the country do not have documentation and registration and this has kept them away from accessing schemes organised by the government or making their employers accountable to them even amid the pandemic.

This has given employers the chance to evade from their responsibilities towards the workers, choose not to pay them for their work, throw them out at will and mistreat them. These problems arising from lack of documents and registration among migrant workers, deprived them of benefits and opportunities and further pushed them to the dens of poverty and indignity amid the coronavirus lockdown. Millions of workers were left without resources and stranded away from their homes in distant towns and cities, becoming the worst affected section of population amid the coronavirus pandemic.

Why do a Bulk of Indian Workers Lack Documentation?

One of the reasons for a lack of documentation and registration papers among migrant workers is that these processes are often extremely complicated and workers find it extremely difficult with their meagre income and literacy to get these made or make sense of the procedures involved.

When these registrations have to be done on one’s own, it becomes very difficult for the migrant workers because most often they don’t have online literacy or access to digital sources.  Secondly, incentives for workers to underreport their workers is also one of the major reasons why a vast majority of workers aren’t able to get the benefits of several government announced schemes.

A heavily undocumented workforce heightens the possibility of workers being exploited and violated more often than they would have been under normal circumstances.

Revelations from the latest Periodic Labour Force Survey (PLFS), show more than half of India’s regular wage-workers had no social security net, and 71% had no written job contract in 2017-18. Moreover, with the coronavirus pandemic coming as a severe blow, workers throughout the country have lost their jobs and the worst hit have been workers from the informal sector.

India’s informal sector workers comprise nearly 92% of the workforce. They have been receiving no support from their employers and most of them haven’t even received the benefits and cash offered by the governments due to problems of low documentation and lack of registration.

What adds to their problems is the fact that they were not registered under any social security scheme and there was a consequent lack of Direct Benefit Transfer Links to their bank accounts. More than half of the workers haven’t received any promised cash from the government. This is sad, because had these workers been documented and registered, the cash transfer schemes could have greatly helped them and brought about the much needed respite during the lockdown. More than 32% had to borrow money and 15% were compelled to sell off their assets just in order to be able to eat two meals a day.

Many Schemes for Workers But Lack of Documentation Impacts Accessibility

The government has come up with many schemes to help workers and reach out to them in times of crisis such as the pandemic but lack of documentation and registration are major hinderances. One of the reasons why workers find it hard to register themselves is because it involves a complex registration process which includes filling of detailed forms, documentations, proof of employment which most workers don’t own etc.

Moreover, getting oneself registered under the State Worker Welfare Boards is also a very big challenge facing migrant workers who come from different states. Lack of awareness regarding these processes is also a big problem. The government has many programs to ensure the welfare of workers and give them access to social security. Schemes like Provident Fund, Employees’ State Insurance among others but employers often don’t bother to inform the government of the number of workers they have employed, so they are never able to avail these schemes.

Moreover, by not informing the total number of employees, employers save on compliance costs for social security payments per employee, cost for employee benefits such as transportation and living expenses while taking all the benefits themselves by employing fewer workers than the threshold for employment set up by the government.

This renders the workers almost invisible for the government and they do not know who they are and why they are unable to claim the benefits of the announced schemes. This deprives most Indian workers of insurance schemes, housing and other provisions, maternity schemes and other incentives.

It wouldn’t be wrong to say that employees have a clear incentive for no reporting workers and this encourages the culture of low or no documentation of workers.

No wonder, with no documentation, registration and social security nets, lakhs of migrant workers were left abandoned and helpless in cities as employers comfortably evaded their responsibilities. The weak enforcement of labour laws combined with the invisibility of workers has brought about the crisis and taking it to its peak amid the coronavirus pandemic.

It wouldn’t be wrong to say that the pathetic plight of the migrant workers in India has its root in the nature of the informal economy itself and its inability to hold employers accountable to workers.

Devoid of legal, social and financial security,India’s  migrant workers  have indeed borne the maximum brunt of the lockdown.

If India wants to protect its migrant workers amid the pandemic and empower them for years to come, the key lies in formalising the economy and improving the quality of life for millions of Indian workers. It is time to put more power in the hands of the workers and take empowerment schemes to them with more intensity and better enforcement of labour laws.

The Sushant Singh Rajput Case and the Upcoming Bihar Elections: Justice Isn’t the Prerogative of the Famous

India’s Coronavirus Lockdown and My Musings on the Good, Bad and the Ugly of Human Existence

Compelled by Existence and Sustenance, Migrant Workers Flock Back to Indian Cities