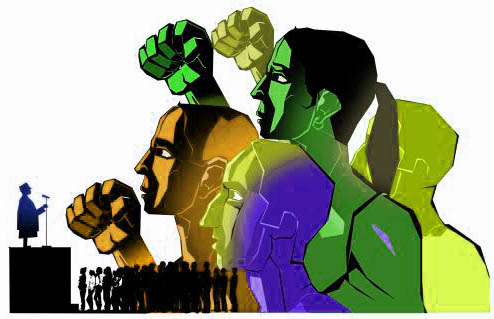 India has a glorious tradition of eminent lawyers and jurists playing a very valuable democratic role. This was particularly strong during the early stage of the Congress-led  freedom movement  when lawyers provided the most important base. Not equally well-known is the important role played by several eminent lawyers in providing legal help to revolutionaries of the freedom movement.

This important public role of lawyers, retired judges and jurists needs to be reasserted whenever democracy is in difficult times. At present more specifically there are five areas where legal luminaries including retired judges can provide much needed help to Indian democracy and vulnerable sections within it.

Firstly there is the important issue of repealing the three controversial farm laws, as demanded by the farmers’ movement. This is an important demand not just for farmers but for the overall food security of the country as well. If many legal luminaries and retired judges can together extend their support for this demand and also suggest the legal way forward for this , then this will be very helpful for the farmers’ movement today, and at a later date, if the government accepts this demand, then this will be helpful for the government also.

Secondly, big changes in labor laws have taken place recently in the process of codifications and most of the central trade unions as well as other labor organizations have opposed this, pointing out towards weakening and dilution of labor laws. As most workers have toiled in India in exploitative condition, there is clearly need overall for strengthening labor protection and not weakening it. There is a lot of uncertainty among substantial sections of workers regarding whether and to what extent protection and benefits available to them under earlier laws specifically meant for them will continue to be available. Hence eminent lawyers, jurists and retired judges sympathetic to protecting the rights of workers should come together to form a committee to prepare a comprehensive report on recent changes in labor laws with special emphasis on whether rights and welfare of workers have been diluted or weakened and if this is the case then what changes need to be introduced to check this.

Thirdly, there is increasing concern that more and more activists ( including students and very young persons on the one hand and very elderly  persons in various conditions of disabilities on the other hand) , journalists and persons from weaker and disadvantaged/discriminated sections have been implicated in serious cases, imprisoned or harassed in other serious ways.

There is increasing concern in India and among friends of India that unduly repressive, undemocratic laws not only exist but are also being repeatedly misused , laws justified for use against terrorists are being used against dissenters. Freedom of expression is being curbed, undue restrictions are being placed on media and NGOs, violating both the constitutional precepts of protecting freedom of expression and right to livelihood.

Recent evidence has even emerged that to imprison some dissenters or defame/repress some social movements, they may have been made the victims of conspiratorial actions. Hence all such cases relating to imprisonments or implication in serious cases of dissenters and media persons should be reviewed by an independent committee of distinguished lawyers, jurists  and retired judges known for their commitment to civil liberties, freedom of expression and right to livelihood. This independent committee should also examine cases of persons from poor and vulnerable backgrounds remaining imprisoned for long without clear grounds for this and of repressive and unduly restrictive laws being used against dissenters and to unduly curb the work of media, activists and NGOs. The recommendations of such an independent committee can bring much needed relief, help or at least hope to a very large member of  victims of injustice and their family members.

Fouthly, environment protection is of great and increasing importance in these times of climate change and of environmental crisis almost taking the form of a survival crisis. Hence there is a lot of concern that in recent times some of the environmental safeguards built up over the years with a lot of efforts have been  threatened and violated. Hence another independent committee of legal luminaries and retired judges should be  formed to examine this important issue and to give its recommendations to strengthen the safeguards and overall system of environment protection.

Fifthly, keeping in view the increasing need to provide legal help to victims of injustice, whether ordinary people or better known dissenters and activists, an important initiative should be taken up by distinguished lawyers, legal luminaries and retired judges , supported by other citizens, to set up a new non-partisan national organization of legal aid which can  be strengthened with inputs and contributions from diverse sections of society committed to justice and democracy.

These five voluntary, public-spirited efforts can contribute much to strengthening justice and democracy in India. These time-bound efforts can be started simultaneously with the objective of achieving very important and useful results within a period of four months or so.On the other hand, in a very optimistic scenario, the government can itself be called upon to take up these responsibilities, for which the following demands can be represented to it together by many distinguished lawyers, jurists, legal luminaries and retired judges—

Bharat Dogra is a veteran journalist and author. His writings in Indian publications and abroad have been recognized in the form of several prestigious awards.

Press Freedom/Australia needs a Media Freedom Act. Here’s how it could work

Donor-funded journalism is on the rise in Africa: why it needs closer scrutiny