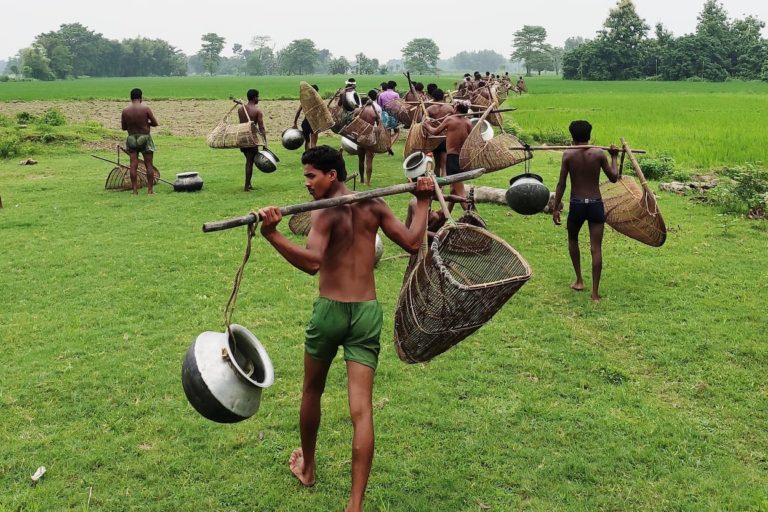 In recent years, farming of traditionally grown crops like corn and rice in Bihar, has been hit by weather uncertainties and recurring floods. Some farmers, however, have turned the crisis into an opportunity by taking up the cultivation of foxnut as their primary produce. Popularly known as makhana, foxnut comes from the plant prickly water lily (Euryale ferox) which grows in the stagnant water of wetlands or ponds.

Bihar is currently the world’s biggest producer of makhana with a 90 percent share.

“Makhana made me a happy farmer. I used to cultivate corn and rice, but they were not profitable. I also tried wheat farming but could not turn farming into a profitable business. But, now makhana is proving my decision to become a farmer right,” Chinmayanand Singh, a Purnea-based farmer told Mongabay-India. Singh quit his journalism career to try farming.

“It is the only crop in this area which is not affected by uncertain weather. We are not afraid of heavy rains and storms,” he said.

Talking about the profit from the produce, Singh said, “We usually make double of the investment from makhana crop. I consider this crop as the most suitable crop in the time of climate crisis,” he added.

There are many farmers like Singh in Kosi-Seemanchal area those who are taking up foxnut farming as a ray of hope. Kosi-Seemanchal is a subregion of Mithila region in the northeastern part of Bihar. It consists of Kosi and Purnia divisions. It has seven districts — Araria, Madhepura, Saharsa, Supaul, Purnea, Kishanganj and Katihar. There has been an increase in sowing-area of makhana in this region.

The state government also sensed the emerging trends in farming and has announced a scheme to utilise 1.04 lakh (104,000) hectares of abandoned low land for foxnut cultivation.

Makhana is often marketed as an organic, gluten-free snack and superfood due to its nutritional value.

“Makhana is like a medicine in form of food. It contains 78 percent carbohydrate and 10 percent protein. It is also rich in many minerals,” said Vidyanath Jha, a researcher and professor at MLM college, Darbhanga.

“Foxnuts are commonly consumed in puffed and roasted forms. They can be tossed with some black salt and consumed as a snack. Some people prefer its kheer,” Jha added.

Makhana is also known for its anti-diabetic property. Research conducted at the Research Center for Makhana, Darbhanga found that makhana based products are low in sugar content. “We prepared makhana barfi and kalakand as sweets and makhana chapatti and makhana pakora as evening snacks, from makhana flour and mixed flour,” said the researchers in the study. Makhana kalakand was found to be low in sugar (16.66%) and high in protein (11.53%) as compared to makhana barfi’s sugar (19.33%) and protein (5.40%) content.

“From this study, we concluded that kalakand as sweets and makhana chapatti (1:1) as evening snacks were the best snacks for health-conscious people in terms of their calorie intake,” it added.

Apart from Bihar in India, foxnut is produced in Korea, Japan and Russia, but almost 90 per cent of production comes from 9 districts of Bihar i.e., Darbhanga, Madhubani, Purnea, Saharsa, Katihar, Supaul, Sitamarhi, Araria and Kishanganj. Earlier the production of foxnut was limited to Darbhanga-Madhubani, Saharsa-Supaul and some part of Sitamarhi, but nowadays farmers from districts of Purnea division are also taking interest in foxnut farming.

Purnea is famous as Makkahland (land of maize) as maize is the primary produce of this area. However, the uncertain weather has been damaging crops in the area in recent years.  The popularity of foxnut farming in this area is also important for environment.

“We reuse leaves and stalks of the foxnut after harvesting. It acts as a fertiliser for next crop. However, few farmers use chemical fertiliser in the field which has adverse impact on the crop and environment,” explained Singh.

A recent study by ICAR-Research Centre for Makhana, Darabhanga suggests that foxnut farming can be profitable even if farmers are only dependent on monsoon rains.“It has been found that the minimum net profit of Rs. 1,30,000 per hectare could be obtained from makhana cultivation depending only on monsoon water,” the study said.

Many farmers in the area are taking up foxnut farming leaving their traditional cropping patterns.

“I had been facing huge losses due to floods for few years. My fields are located in low land areas. I found that makhana is suitable for my fields. I’m making more profit by foxnut farming as compared to other crops like rice and wheat,” he said.

Is foxnut a climate resilient crop?

Purnea farmer Singh says that foxnut is capable of coping with weather uncertainties. “Leaves of foxnut get turned during storms, but it is very easy to handle this situation. We can turn back the leaves again after storm. We have not faced a water crisis yet in the area,” Singh added.

According to IMD’s annual rainfall reports, Bihar receives 1,027.6 mm rainfall during the normal monsoon period; the average annual rainfall through the year in all seasons is 1,205.6 mm.

Bihar government is also promoting foxnut farming in the region. Traditionally, foxnut was sowed into ponds and wetlands, but now lowland areas are also being utilised as sowing areas for foxnut. Farmers are making weirs in the fields to hold water for foxnut farming in Katihar district.

“Sixty percent of sowing of foxnut is now being done in lowlands. This is because of scientific interventions. Due to the new trend, sowing area of foxnut has increased in the region,” said Anil Kumar, Agricultural Scientist of Bhola Paswan Shastri Agriculture College, Purnea.

State government came up with a scheme in which there is a plan to utilise 1.04 lakh hectare land for foxnut farming.

Foxnut farmers are experiencing a lack of skilled workforce on the ground. Workers need to spend hours in water to cultivate and harvest foxnut.

“It is difficult to find skilled workers in the area,” said Singh.

“Weed management and proper harvesting are two crucial steps in foxnut farming. Every step is labour intensive and we need to spend a lot of time and energy on these steps,” added Singh.