The arguments that I am about to make are not against the study of robotics or those who are engaged in the discipline in any manner, I am talking about a situation where all the faculty members of a university are functioning like robots.I appeal to you to not consider me crazy.This piece is an attempt to reflect upon the recent incidents that have been shaping up in different universities including JNU, HCU, Visva Bharati and how they forced me to consider the above concern. It appears from the attitude of the academic administrators that they badly need “primitive robots” to teach in the class, I stress on the word “primitive” as these robots would not think, would not question, would not provoke students to argue, debate, innovate and throw away orthodox ideas. Technologically, it’s possible to develop such robots to teach in class, they will be inexpensive and very accurate in drawing figures, solving equations or even reciting texts from William Wordsworth’s  body of work with immaculate pronunciation

The advantage of robotic teachers would not be restricted to the above, in fact they would serve a set of other functions too. They will not join in any signature campaign against the head of the institution such as the VC and would not require to be imprisoned in the central office as was recently done at Visva Bharati. Not only that, the VC would not be required to make a call to socially boycott a professor of Physics as was reportedly done at Visva Bharati.  Thus, it looks like robots would be a very good replacement of the present-day teachers who apparently draw a lot of salary and hardly do any work. I am not really crazy in proposing it, I am serious and I am sure that apart from teaching these robots will also nicely do all kinds of data entry jobs that present-day university teachers do for NAAC, NBA, NIRF rankings etc. The robots will be highly accurate, too!

As its technologically possible to produce such robots, the government now seriously needs to consider the possibility of replacing human teachers by robots to be in sync with the VCs. Unfortunately, all good things come with some cost. The cost involved here is not too much. It’s merely destruction of a few good universities which had earned their reputations over decades, destruction of the possibility that a young Einstein can question Newtonian mechanics or a young de Broglie can propose a crazy idea called matter wave which has no application that a common voter knows.

The system is actually gradually going towards the golden days of robotic teaching and trying to get rid of those faculty members who are too human- who love their students like a natural human being, who are inquisitive, logical, and don’t accept an idea unless that’s convincing. To establish robotic teaching many India universities are doing pioneering work. Specially, JNU and Visva Bharati need to be mentioned. In an outstanding and praiseworthy effort in that direction, the VC of Visva Bharati has show-caused a large number of members from the Physics faculty and asked the HoD of Physics  department,Prof. Manas Maity-a well known particle physicist to step down and appealed to socially boycott Dr. Arani Charavarti, an academician whose life is his teaching, who designs efficient clay ovens for locals to save trees, designs bearings for rickshaw to save rickshaw pullers from tuberculosis, has transformed the lives of many students and so on. He is perhaps a man who can really make “Atmanirbhar bharat” a reality, but why does he concentrate on things that are not expected from a University faculty? Who asked him to think of trees or rickshaw pullers or street dogs or of the students? He was supposed to write papers on Nature and Science, compete for big awards, and join different prestigious committees. He did none of these things and thought for the society, that’s definitely a criminal offence! He must be punished for that. Other professors who have been given show-cause notices also possess too many human characteristics, which are undesired for the job of a university teacher. The problem is that these Visva Bharati professors and their counterparts in other universities have many followers in society- their students, readers, people benefited directly or indirectly by them, and it’s technically tough to boycott them. Keeping that in mind, our great academic administrators may think of suspending these people and organising a set of faculty development programs on how to behave like robots. Such a training will provide us with an interim solution until we can either close the universities or transform them into institutions where only robots teach. 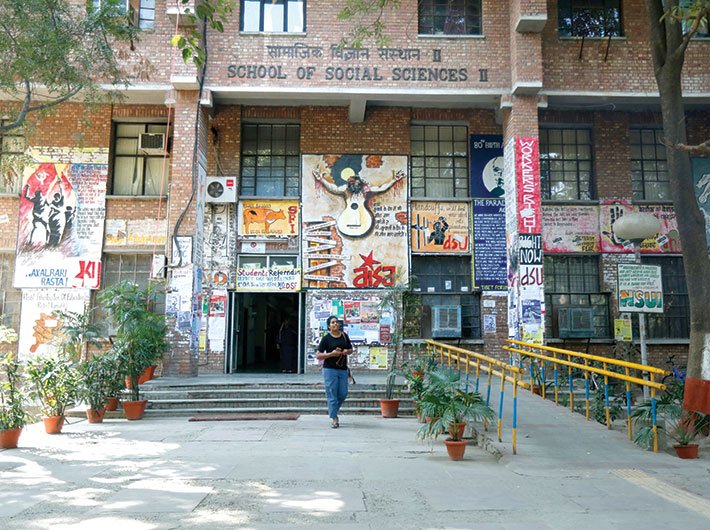 JNU VC And the Absurdity of the Online End Semester Examination