The recent creation of a new Ministry of Cooperation in the  Government of India should be widely welcomed.This reflects a widely felt need in the world to take forward the cooperative movement. This thinking is very much an integral part of the wider thinking at world level for alternative forms of economic organization which can avoid the problems seen in the capitalist as well as the communist structures. However while promoting cooperatives one also needs to be conscious of the need to remove and reduce the weaknesses and problems of the cooperative structures that already exist and to learn from their less than happy experiences so that better potential of cooperatives  can be realized in future. It will not be helpful to merely publicize the bright side of cooperatives and their problems should also be faced clearly in a spirit of learning from them and avoiding them in future.Indian government sources have stated that the government will strengthen the legal, administrative and policy aspects of cooperatives and increase the ease of doing business for them. It remains to be seen how this plays out in actual practice, but the overall thrust of government policies has to give more attention to equality , justice and environment protection if the real potential of cooperatives is to be realized.

Aggressive forms of capitalism have not only been snatching jobs ruthlessly but in addition are also  increasing  job related discontent, frustration and alienation. At the  same time there is growing yearning for forms of economic organizations which can provide  more satisfactory, stable, sustainable and creative livelihoods. It is in this context that cooperatives should be getting increasing attention.

However organization of cooperatives cannot substitute for the more basic work of increasing equality. If there are overall high levels of inequalities in some villages, then it is likely that cooperatives will also tend to advance more the interests of the richer sections. Despite such limitations, however, cooperatives retain their importance but their proper potential will be realized better if simultaneously other efforts to increase equality are also made.

Cooperatives already have a strong presence in many countries. In Norway nearly 42% of citizens are members of at least one co-operative. In Canada this number is around 25%. In India cooperatives have a strong presence in rural credit, in sugarcane marketing and dairy sector, as also in urban housing.Other sectors which can have very creative form of cooperation include cooperatives of journalists and writers. These should be pursued in more independent ways without depending too much on government support, or even having any real hopes for this.

Experience has shown that In some countries during periods of economic crisis, cooperatives progressed more. In Spain, for example, during a period of crisis co-operative enterprises were found to be more capable of avoiding the possibilities of collapse and there was also much mutual help among cooperatives. Earlier during some years of  economic crisis in Argentina about 200 failed industrial factories were revived by newly formed co-operatives of workers and officials.

This  has re-emphasized  some important strengths of co-operatives. These often operate on the principle of ‘one member, one vote’ and hence are inherently a more democratic form of economic organization. Secondly, co-operatives often have close ties to local communities and plough back at least a part of their economic gains into community welfare activities. For example several farmers’ co-operatives are known to contribute a part of their profits for the welfare of the villages from which they draw their members.

However, as indicated earlier, some limitations of the co-operatives become apparent when the model is implemented in conditions of high inequalities. In India it has often been observed in villages where socio-economic inequalities are high that the upper sections dominate the co-operatives and often try to run them to suit their own interests. So the interests of weaker sections are often ignored, or at least do not get the same attention, and co-operatives tend to perpetuate or even accentuate inequalities in such cases. This has been pointed out in the context of the political powerfully sugar co-operatives in Maharashtra. Here the interests of weaker sections will be better served if the limited water supply of semi-arid areas is not spent so much on water-intensive sugarcane farming. Then they will be able to get some water for their subsistence farming of millets or other crops requiring less water. But the politically powerful co-operatives dominated by the bigger farmers try to corner the scarce water supply for water-intensive sugarcane crop.

A related problem is that politically connected powerful persons who gain dominance over co-operatives also indulge in corrupt practices, apart from denying credit and other facilities to weakest sections. Some years back I attended several public hearings of weavers In Varanasi, a leading centre of handloom silk weaving in the course of writing a book on this subject. One weaver representative after another who spoke at this hearings complained bitterly about the corruption in cooperatives which had been established in the name of benefiting them . A highly appreciated Hindi novel Jhini Jhini Beeni Chadariya ( written by Abdul Bismillah) has exposed this corruption and the manipulations of the richest persons dominating them in great detail.

So efforts to increase equality, improve democracy and transparency in the running of cooperatives and curb corruption are very important in the context of improving the functioning of cooperatives. One hopes that the new drive for expanding the cooperative sector by the newly created ministry will keep in mind these lessons learnt from the past experience of cooperatives.

Bharat Dogra is a journalist and author. His recent books include Protecting Earth for Children and  Man over Machine ( Gandhian Ideas for Our Times). 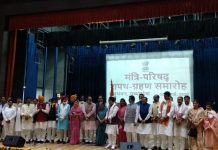