Elections are scheduled for early next year in Punjab. The Congress is the ruling party here, while AAP, Akali Dal ( with BSP as ally) and BJP are the main opposition parties. The Congress was generally expected to be the strongest contender this time too, but the situation has been messed up somewhat by a number of disruptions in recent months, including the hasty departure of the long time Congress Chief Minister Captain Amarinder Singh.

However the situation was  redeemed by the selection of Charanjit Singh Channi as the new Chief Minister.While the selection of a dalit leader as Chief minister should have been welcome in any case, in addition his functioning so far has also endeared him generally to people, particularly weaker sections.

Unfortunately, however, the Congress government being headed by him is being embarassed time and again by uncalled for provocative statements and actions of the President of the Punjab Congress Mr. Navjot Singh Sidhu. There are few examples in the political history of the state (or even other states) of the President of a state unit of a ruling political party saying or doing so much to embarrass his own government.

Earlier when Amarinder Singh had to leave, who had created the most problems for him? Then also it was Mr. Navjot Singh Sidhu.

During the over four months of being appointed President of Punjab Congress, Mr. Sidhu has created some sort of a record of making statements that would be considered embarassing or uncomfortable for his own government.

Is he really working in the interests of the Congress Party or setting his own agenda?

Navjot Singh Sidhu started his political career with the BJP and stayed with it for over a decade. His time with the Congress so far has been about one third of the time he spent with the BJP. In between he had also tried to launch his own political outfit as well.

As is well-known before coming to politics he was a distinguished cricketer, a great batsman. He then became a very popular TV personality, particularly on comedy shows. He was also a very popular cricket commentator, much admired for his ready wit.

Obviously an intelligent personality with a ready wit, Mr. Sidhu can be attractive and pleasant for many people. But public life demands much more than this. Mr. Sidhu has a tendency for over-reaching himself, for being over-ambitious, not caring enough about colleagues and rubbing too many people the wrong way. He has been upsetting not just the present chief minister and the previous chief minister, but several other senior Congress leaders as well.

These tendencies on his part have not reduced in recent weeks and may well continue till the election. With this sort of a President the Congress will keep getting into problems and embarassment after another, right up to and during the election and even after this. Hence no time should be lost in sacking him from the post of President of Punjab unit of Congress, and finding a mature, widely acceptable leader for this post.

Mr. C.S. Channi as the Chief Minister, the new President of Congress along with other senior state Congress leaders should then unite to lead the Congress towards the impending elections. They should also consider forming an alliance with the left parties.

Bharat Dogra has been involved with several social movements. His recent books include When the Two Streams Met ( Freedom Movement of India ) and Man Over Machine (Gandhian ideas for our times). 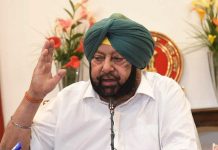