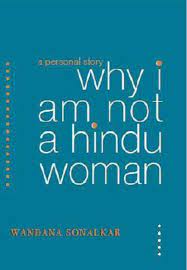 It is as a woman who has rejected her Hindu identity that I look at the misogyny, the Islamophobia, and the Brahminical divisiveness that have put down deep roots in India today. Mine is not a Dalit feminist standpoint, for my life has not been that of a Dalit woman. It is that of an upper-caste woman, a feminist, who has turned to learn from being in that upper-caste location; who accepts that leadership for social change will come from elsewhere, from another generation, another caste, another class . And it is as one such that I have written about why I am not a Hindu woman

A book of this kind—written with heightened sensitivity and intellectual honesty—is not just yet another ‘academic’ text. Sonalkar’s narrative is bold and lucid; it engages the reader, and gives us the courage to interrogate the world we tend to take for granted: the socio-cultural practices implicit in organized Hinduism or political Hindutva, the violence of patriarchal Brahminism, and the act of degrading the ‘other’—marginalized castes, minorities and above all, women. At a time, when political Hindutva with its ‘war hysteria’ and hyper-masculine nationalism is becoming hegemonic, Sonalkar reminds us that ‘the shift from Hinduism, whatever that may be, to Hindutva would not have been possible without the profound inequalities that are part of everyday, lived, Hinduism’. To quote Sonalkar:

The proliferation of incidents of violence that we have seen in recent years cannot be explained as a result of the politics of Hindutva alone. Hindutva builds on the deep roots of violence in a caste-patriarchal social order.

In fact, from Jotirao Phule to Kancha Ilaiah—we see a politico-intellectual tradition that comes with a hammer, critiques organized Hinduism, and makes us see its inherent violence. Well, the defenders of Hinduism can argue that it is just an aberration; otherwise, Hinduism is essentially about profound reflections on life and death, or maya and moksha; it allows multiple voices—from Vedanta to Lokayata; it gives us saints like Mirabai, Ramakrishna Paramhansa and Ramana Maharshi; through the missionary zeal of Swami Vivekananda and Dayanand Saraswati, it sought to fight diverse social evils; and it is about the elasticity of Gandhi’s politico-spiritual consciousness and ahimsa. From Sarvepalli Radhakrishnan’s The Hindu View of Life to Shashi Tharoo’s Why I am a Hindu— the story of sanitized Hinduism, it would appear, is qualitatively different from the dictates of Manusmriti, or what the likes of Savarkar and Golwalkar pleaded for. Even though I am not altogether indifferent to this interpretation, I still agree with Sonalkar’s central thesis. As everyday Hinduism is practiced in our families and caste groups amid the heavy burden of ritualism, patriarchal norms and tyranny of priestcraft, it tends to devalue women, and rob them of their creative agency. From dowry death to domestic violence—the culture of everyday/lived Hinduism  does by no means indicate our quest for self-dignity, spiritual growth and intellectual freedom.

I feel what has enriched Sonalkar’s book is her honesty to tell a ‘personal story—say,  the way she saw her mother’s trauma and father’s ‘affair’ in the process of growing up in a ‘dysfunctional’ family, and realized the hollowness of the mythical construct of a ‘happy’ Hindu family. ‘The duplicitous moral base of the Hindu family’, Sonalkar reminds us, ‘perpetuates violence against women within the home.  Once a girl is married, her own parents often turn a blind eye to physical abuse and ill-treatment by her husband and his family. To have her return to her natal home would be an economic strain and a social disgrace’.

Furthermore, even though she belongs to a privileged caste/class, and Marxian radicalism or university-centric feminist discourse is her intellectual capital, she refuses to forget the kind of questions that Dr. B. R. Ambedkar and his disciples raised with reference to the violence implicit in patriarchal Brahminism with its misogyny and graded inequality. No wonder, she engages quite meaningfully with the likes of Gopal Guru, Sharmila Rege and Uma Chakravarti, reflects on feminism and the caste question, and raises a deep concern:

Is Dalit feminism something that concerns only ‘them’ directly, and ‘us’ only through empathy? Or does what feminists from a Dalit-Bahujan social location are saying call for revisiting our understanding of feminism in India?

With its five chapters, the book is likely to arouse the radical imagination of those who dare to engage in a self-reflexive quest. As a reader, you can see her as a feminist; you can find her as a political sociologist who critiques sharply the violence of Hinduism and Hindutva; and you can also see her as a cultural theorist who makes you see the ideology of patriarchal sexist violence in the epics like the Ramayana and the Mahabharata.

Her critique cannot be undermined by giving a counter-argument: neither Islam nor Christianity is emancipatory for women, and hence, it is unjust to blame Hinduism for all evils! In fact, as an empathic reader, I would love to imagine that her refusal to see herself as a ‘ Hindu woman’ would eventually enable her to realize her oceanic abundance—beyond all ‘isms’ including  left-Ambedkarite feminism. After all, our ultimate salvation lies in the art of deconditioning, and seeing beyond even radical politico-academic categories! 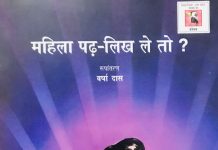